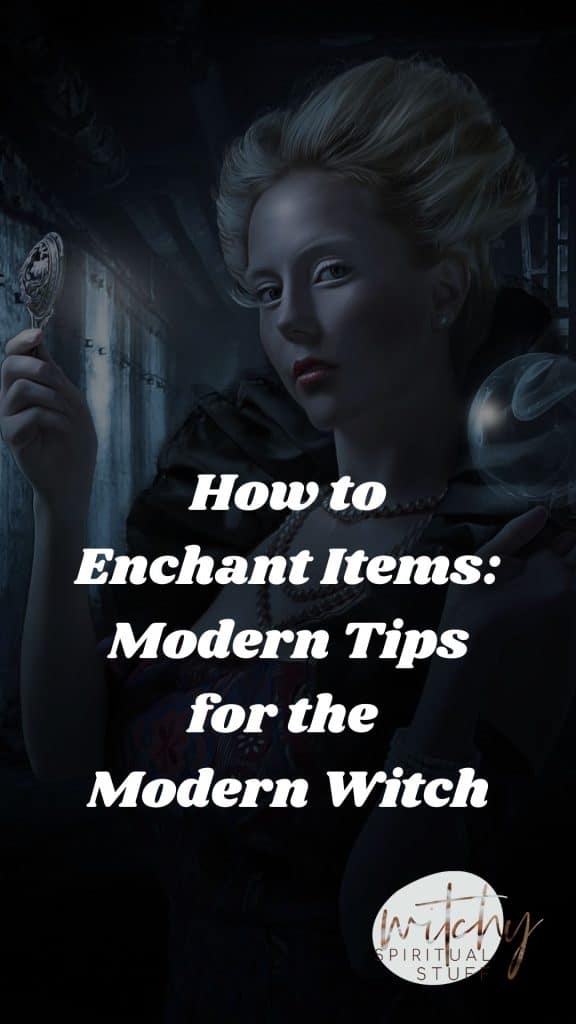 So you have a pendant, a ring, a favorite pillow, or some other object you want to enchant. You can turn pretty much all everyday objects into enchanted objects, with the right approach, from a comfy chair in your house to your dinner table and even your car.

With intention, from your own energy, you can do anything, get anything done, and get any outcome you desire, including, of course, creating an enchanted item.

The Power of Intention to Enchant Items

Intention really is at the root of everything in real life. The definition of intention is sheer human desire, the will to be something, have something, do something, or make something happen.

One critical point to keep in mind with all magic: you cannot intend anything for someone else.

This misconception is probably the greatest one that exists in the world of witchcraft.

Each human comes into this world, the human experience, with their own set of intentions, their own power, and their own gifts.

When we say, “we are all created equal,” that statement is most true when it comes to intention and personal power.

No single person is more powerful than any other person. We are all born with equal power and equal opportunity to access that power.

The trick lies in whether someone is actually aware of and wielding their power, or new powers.

This is where intention comes in.

When you set an intention, you are, effectively, casting a spell, creating an enchantment level.

Whether you practice witchcraft, call it law of attraction, say it’s the power of your mind, whatever. It’s casting a spell.

Think about it: in every major religion and spiritual practice across the world and throughout history, the “creator” has the idea first, and then speaks the words, and then thought becomes form.

It is a magical effect.

The words are critical. Why do you think we call the process of putting words together “spelling?”

So, anytime you want to bring something to life or make something reality, you must follow these steps: and they are all rooted in intention.

You don’t need an enchanting table or anything special.

The purpose of creating a magic item, presumably, is to have a charm of some sort that you can either focus your attention on or keep with you at all times.

Or it will not work.

Every show or movie based on the supernatural will have spell components like hex bags, an enchantment table, or protective objects that a witch makes for another person using various type of ingredients.

It’s a load of crap.

Whoever holds the enchanted object, hex bag, or protective item, must be directly involved in the spell.

Because while you cannot affect someone else’s life or outcomes, you can certainly influence them.

We humans are incredibly influential creatures, and some of us are deeply impressionable.

You can absolutely convince someone they are cursed, and if you have them thoroughly convinced, you have influenced their thinking. Once you have infiltrated someone’s belief system, you have effectively cast a spell on them. Their intentions are now aligned with your intentions.

You have wielded your magic on someone else.

But be aware, once you mire yourself in darkness, that darkness is within you, and it is very difficult to separate yourself from that darkness in your own life.  It’s a good idea to avoid this sort of magic.

You will soon find yourself struck by the same curse you influenced on someone else. That is how energy works.

Likewise with positive enchantments and spells. If you are influencing someone in a positive way, say to make good choices, convincing them of their innate power, their gifts, their blessings, that positivity will wash over you.

In the Hindu religion, this process is called karma. In the Judeo-Christian religions, it is the tenfold law. “Whatever you give comes back to you tenfold.”

In witchcraft, we call it the rule of three, stating that whatever energy we put into the world will come back to us three times as powerful.

Every single spiritual practice understands this concept of karmic law: what you put out, you receive in return.

We perhaps see influence – positive and negative – and enchantments play out best in parenting. How many times have you noted how similar children are in behavior to their parents?

Their parents both tell and show them their whole lives how to behave.

You’ve heard “do what I say and not what I do?”

We influence our children both with our own intentions, with our actions, and with our words.

And the objects we give them, clothes, toys, supplies, even the furnishings in their bedrooms, all influence who they are. Each of those items is enchanted, whether we realize it or not.

We are spoiling our children when we spend money thoughtlessly and treat items as though they do not matter, easy to toss and replace.

We teach our children responsibility when we expect them to care for their items, make their beds, clean their surroundings, and we teach them about money and its value.

Nowhere is the power of enchantment more obvious than in the relationship between parents and their children.

But it can be incredibly powerful among any humans who interact with each other strongly enough.

Thus, any time you want to enchant an object, you must set your intentions and then hold those intentions.

If you are enchanting the object for yourself, you must build a ritual around the object and keep a constant reminder of that enchantment.

How to Enchant an Object

The most efficient way to begin any spell is to set the intention, a specific purpose. With intention, you need to be really clear on two things: why you have this intention and the outcome you expect.  That’s how magic works.

You cannot simply say “good luck.” You need to focus on what that good luck looks like, why it is so important, what that luck will feel like.

Then you need to picture that luck unfolding in open, expansive, and abundant ways.

I am using the word luck here, but this process could be applied to literally anything. The more specific the intention the better, but sometimes you have to start vague and get more specific as you practice.

Now you’ve set your intentions, you need to choose from among your enchantment spells.

You need to create a ritual, with words, that will enchant the object, essentially imposing your intentions upon the physical form or physical forms of the object or objects.

You can surround the object with crystals and/or herbs that highlight the energy you are focused on, and then you need to be sure to write down your clear and direct intentions.

Another good way to perform the ritual is to light a candle, particularly a green candle, or several, in the colors of the energy you are channeling, and then speak your intentions out loud, three times over a candle flame.

Yep, magickal energy is big on that threefold rule.

The idea is that if you say it three times it will embed itself more deeply into your psyche, and thus set those intentions more firmly into the universe.

You are letting the universe know you are serious about the spell effect.

Allow the object to sit under the spell for a full day for maximum value.

Finally, you have enchanted this new item, and it is in its new form. You need to see the object in its new energy source.

See it in its new, enchanted form, in this white light.

The classic witch expression is “As I will it, so mote it be.” You are expressing your power and your gratitude for your power, closing out the spell.

Don’t forget that if you are gifting this item of magical properties to someone, that you include that person in the intention and the ritual in some way, even if it just letting them know “this teddy bear will watch over you.”

You can also share any spell you wrote down and have that person repeat the spell three times when they receive the item, bringing them into that circle of intention.