Divination is an ancient yet widely misunderstood practice. Although it is often conflated with fortunetelling, most divination traditions seek the deeper truths of our existence.

That might include secrets of a situation, valuable insights into a pressing question, or inspiration to fulfill our true purpose. Most divinatory arts tap into our intuition, which is ultimately the conduit between ourselves and the Universe.

There are many forms of divination stemming from rich traditions across the globe. People have always wanted to understand and explore their experiences, and that’s what divination provides.

In short, it’s much more than peering into a crystal ball. Let’s explore all the powers of divination and all the forms this practice takes.

A Brief History of Divination

The earliest forms of divination were based upon natural phenomena. Ancient peoples often looked to the sky for answers, interpreting the movement of stars and planets as signs of greater wisdom.

Astronomical phenomena such as blood moons, eclipses, and comets have long been associated with significant energy shifts and historic events. As many societies imagined deities to live in the heavens, they looked to the stars for answers.

Those ideas persist today, as astrologers continue to read horoscopes from the sky. If you know your zodiac sign, you know how the stars’ alignment at your time of birth can reveal insights about your path in life.

Ancient divination was definitely not limited to the stars, though.

In ancient China, Taoists believed the elaborate patterns on tortoise shells could reveal wisdom. Those markings eventually became the hexagrams of the I Ching oracle.

The practice of using a crystal ball is called scrying, which was used throughout ancient European and Mediterranean societies. The idea was that a reflective surface could invert perspectives and invoke introspection, thus revealing deeper truths.

The Vikings used runes, which they considered a direct source of wisdom from Odin. The distinctive markings could be interpreted as divine guidance.

And throughout human history, people have consumed medicinal plants to alter their consciousness and open their third eye. The visions and dreams that arrive in this state reveal truths beyond what we can normally perceive.

Often, divination was the duty of highly trained priests or shamans, or of designated seers. Sometimes, the gift of sight was considered a random act of destiny.

In recent centuries, clairvoyant and intuitive individuals have made divination a part of their practice. Some perform divination for others, and some for their own insight and development.

Across all traditions, divination can be categorized in several forms:

Augury is the interpretation of omens, which could be animals, such as ravens or owls, weather or astronomical events, or shifts in water or terrain.

Oracles seek to communicate with higher beings or, in some cases, beings who have transitioned to the spiritual realm.

Vision quests are journeys or activities meant to evoke higher states of consciousness and therefore greater insights from the Universe.

Prophecies are messages from higher beings that are not necessarily sought. In various societies, prophets are those who see the future or greater truths because deities want them to.

Pattern interpretation typically involves throwing or scattering an object, then discerning insights from the shapes that are formed. This type of divination includes everything from hydromancy to tea reading to cartomancy, aka tarot cards.

In case you’re wondering, the suffix “-mancy” is derived from the Greek word for “seer.” The ancient Greeks created many forms of divination, which typically use pattern interpretation. Examples include:

Hieromancy, which was divination using the entrails of sacrificed animals.

Ornithomancy, which interpreted the appearance or movement of birds.

Bibliomancy, in which you ask a question then open a spiritual text to a random page.

In medieval Europe, it was common to use ceromancy or molybdomancy, both of which involved melting wax or metal, respectively. The resulting shape was considered a symbol of future happenings. 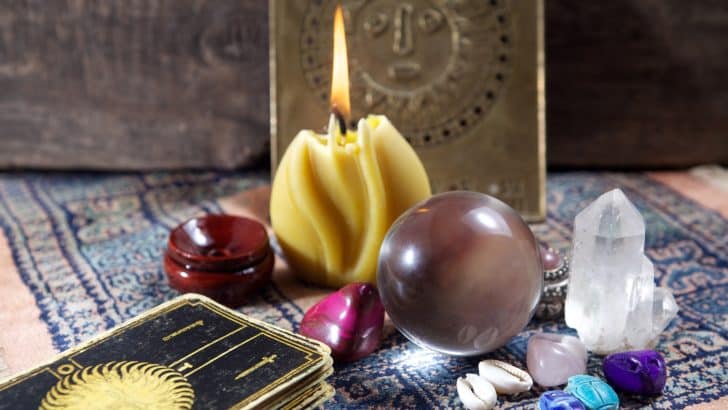 Eventually, the art of tea reading, or tasseomancy, emerged in Western Europe. You may recall the character Sybill Trelawney performing this in Harry Potter and the Prisoner of Azkaban.

Many societies have practiced some or all of these forms of divination. The exact method varies but the goal is usually the same: to let natural phenomena or random events transpire as signs of greater patterns and truths.

In any case, divination is a means to look past the mundane and access transformative wisdom from the world beyond.

Incorporating Divination into Your Practice

While historical methods have occasionally been quite elaborate, they all harnessed the diviner’s intuitive perception. The exact pattern or event was not as important as one’s ability to interpret that experience.

The same is true in the modern age. The divinatory arts are a matter of receiving wisdom and reflecting on events.

For obvious reasons, hieromancy and pyro-osteomancy are less common now. Among the forms of augury, astrology is now the most popular.

Cartomancy typically uses tarot cards, while other modern forms of pattern interpretation include pendulum reading, tasseomancy, and even coin-flipping.

Today’s oracles include Ouija boards, seances, and rituals to evoke your preferred deity.

And of course, people still embark on vision quests or use medicinal plants to elevate their consciousness.

But the underlying principle is the same: by observing the patterns of natural phenomena and opening ourselves to communication, we can gain greater insights into the truth of matters.

The key is not to manipulate the situation. When using any sort of oracle or pattern interpretation, you must ensure random movement so you can see beyond our imposed structures.

For vision quests or augury, you must open your mind to messages from beyond your physiological perception.

This all comes down to intuition. So, you’re free to use which method you prefer to invite these messages and insights.

Setting Your Intention for Intuition

Many skeptics dismiss divination as illogical or impossible. That’s because they misunderstand its powers of prediction.

Historically, diviners did practice what we now call “fortune-telling.” However, it was rarely as simple as declaring that XYZ would happen.

Rather, these seers were exploring the potential of a situation and unveiling deeper truths that would suggest a probable outcome.

In one historical example, Roman general Lucius Paulus was gearing up to fight King Perseus of Macedonia. When his daughter Tertia cried to him that “Persa is dead,” he interpreted that to mean he would win in battle.

Tertia was actually heartbroken that her puppy Persa had died. But the general went on to defeat Perseus.

Was that an omen or a self-fulfilling prophecy? Therein lies the power of divination.

By asking the right questions and being open to the answers, we can not only envision but also empower our future. In that sense, divination is indeed fortune-telling.

Rather not a description of an unambiguous future the way modern society assumes, divination is a means of exploring and achieving the most likely outcomes.

Therefore, it’s vital to set a clear intention for your divination ritual. What is your true inquiry, and what insights do you seek?

I love tarot cards; I always have, so figuring out how to use tarot cards as a spiritual guide was a huge undertaking for me.   At first, I thought I had to memorize the meaning of every single card before I could begin to use them.  I took a class in San Francisco at this …

How to Prepare for a Tarot Reading: Simple Tips

You’ve scheduled your appointment, made the date, and now you’re trying to figure out how to prepare for a tarot reading.   Most of your preparation will be internal; you’ll need to make some mental shifts before heading out to work with someone who lives largely in a spiritual, universal space.   You must open yourself up …

Read More about How to Prepare for a Tarot Reading: Simple Tips

Confidence Spell: How to Use Magic to Grow Self-Esteem

Read More about Confidence Spell: How to Use Magic to Grow Self-Esteem

How to Cast a Money Spell

Learning how to cast a money spell is an all-encompassing process that can reap incredible rewards.   So buckle up, because here we go.   Law of Attraction  To attract money into your life, you must first understand the law of attraction, which is basically Witchcraft 101: you attract what you are.   Or, as I prefer to …

Read More about How to Cast a Money Spell

Once you get started looking for the best tarot card decks, you will never stop. It is an endless, lifelong shopping spree of fun.   Even more so than searching for and collecting crystals, I think, hunting for the best tarot deck cards is a work of heart.   And when you begin to actually …

Read More about The Best Tarot Card Decks for Beginners

15 Crystals All Pisces Should Have

Pisces are known for their gentle nature and their sensitivity. They are also highly intuitive people who have a lot of psychic abilities. They are creative and intelligent, and they have great imaginations. They often spend time alone but are also comfortable in small groups. They tend to be quiet, but their sharp minds are …

Read More about 15 Crystals All Pisces Should Have

Spiritual Tips And Tricks For A Pisces

Pisces chakra stones are powerful healing stones. Once you begin to understand your connection to the divine, it can be really fun and fascinating to explore the depths of spiritual practices like the Vedas and Ayurvedic medicine, the zodiac, numerology, tarot, and other divination tools.   For our Pisces out there, this astrological sign has an …

Read More about Spiritual Tips And Tricks For A Pisces

How to Read Tarot without Memorizing Meanings

Not only can you learn to read tarot without memorizing meanings, but in fact you should not memorize meanings.   Trust me. I tried it.   It sucks.   You will end up frustrated, irritated, and maybe even angry.   Which totally defeats the purpose of attempting to communicate with the divine.   So first, let’s get clear on why …

Read More about How to Read Tarot without Memorizing Meanings