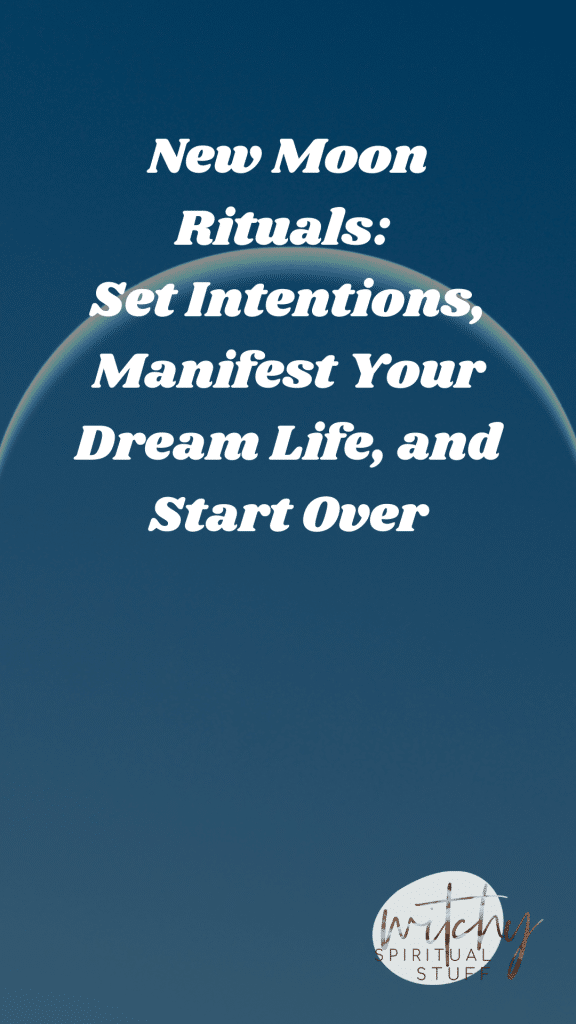 We set our intentions, knowing we are children of an infinitely loving and infinitely wise universe, and we let go and trust the process, the law of attraction, the magic of our craft. What does this have to do with new moon rituals?

Witches, healers, and others who practice the “mystical arts” work with energy. We work with what is to manifest what will be. We understand that we are constantly creating the present and the future.

As part of that practice, it is critical we acknowledge and understand the different energies we have to work with.

And some, call us eclectic witches, work with a little, or a lot, of everything, understanding that really, all are one.

One thing that is very important to any craft – cooking, gardening, writing, or magic – is ritual.

You get better and better, more and more powerful, at what you do the more you practice, and ritual is a tried-and-true way to practice “religiously.”

As a powerful source of very near and constant, reliable energy, the moon is ideal for practicing magic and centering rituals around.

The Energy of the Moon

Blessing, praising, and working with the moon is not new to witches or even to humans. Indeed, for thousands of years, humans have centered rituals around the moon.

Kiddush levana, translated to Sanctification of the Moon, is a Jewish ritual from the Babylonian Talmud performed outside at night in which a series of prayers are recited to bless the new moon.

In Greek mythology, Selene was the Titan goddess of the moon, considered the personification of the moon itself.

The Aztecs honored Coyolxauhqui was the moon goddess who was killed by her brother, the sun god, in a ritual that honored the sun’s victory over the moon every day.

In Native American culture, each full moon is given a name according to its location among the seasons and the wheel of the year.

The moon works more or less with a woman’s menstrual cycle, making its full rotation around the earth every 28 days. It also pulls at the tides and all the other natural water sources on earth, and as we humans are 60% water, and since most water on earth is constantly recycled naturally, it makes sense that we would be affected by the cycles of the moon.

It is powerful energy that cannot be denied.

It is no wonder we have revolved so much attention around it for millennia.

The Cycle of the Moon

Each year, we get 12 new moons. As the moon rotates around the earth, we get to see it or not based on its position and its relational position to the sun.

So, while the moon is always in her own perfect fullness, we only get to see her in relation to how much sunlight she is reflecting.

The Moon and Menstruation

It is thought that long before artificial lighting, women in a single community all had their menstrual cycles around the same time each month, and that those cycles aligned with the moon’s cycles.

Women would often menstruate during the dark moon phase, encouraging rest and self-care, and they would then be most fertile during the full moon phase, a time of abundance and creativity.

It is an interesting experiment for women who are not taking hormonal birth control to see how your cycle operates with the moon.

The Moon and Circadian Rhythms

Another powerful form of moon magic is the moon’s ability to make us tired, to trigger melatonin in our brains, and help us sleep.

When we are at our most energetic, we are cycling with the sun and moon each day and each month – awake with the sun and asleep as the moon takes over. Many studies have revealed the connection between the human biological rhythms and the lunar phases.

There is simply no denying the power of the moon on humans.

The Power of Ritual

So many of us have lost our connection to the energies of the universe because we have become distracted by the industrialization and hyper productivity of the world.

All day, every day, a million things, thoughts, and people are saying “pay attention to me!”

It’s hard not to get distracted.

But, if you’ve been thinking of slowing down, of easing out of that busy life, and of paying more attention to self-care, ritual is an excellent place to start.

New moon rituals give you an opportunity to do both.

Remember that the new moon is the dark phase of the month. It is a time to be still, to reflect on the month behind you, to practice intense self-care, and, if you are menstruating, to honor your menstrual cycles. There is great power in blood magic.

Here are some practices to put into place each new moon:

Set a reasonable intention or two that you plan to work toward as the moon shows her face more and more. Your goal is to be able to have a noticeable accomplishment by the full moon, so just two weeks, and then work on further before the next new moon, at which point you will pause and reflect again.

So, don’t set an intention that you do not plan to work for, or one that you don’t actually believe you are worthy of.

Moon magic, all magic, follows the law of attraction, which demands you to believe, to know, it will come to fruition.

It’s a time of darkness, and depending on where you live, the night can get super black. Honor that darkness by lighting candles all over your house. Create your own light, and revel in the blackness outside. This is your magic. You create your own light.

If you’ve been “meaning” to start that new hobby, take on that new creative task, or refresh some part of your life, now is the time to dedicate some quiet time alone to doing that. You can give yourself the time and space to open up to a new process that you will be able to fully enjoy under the full moon.

New moon is planning phase. If you have a list of things to do this month, write it down. Create a checklist, use those intentions you set above to get those things done, one by one throughout the month. Next new moon, you’ll be able to look at your list and smile.

Alone time is critical for everyone all the time, but it is no more pressing than during the new moon. Take time to reflect on who you are, where you’ve been, and who and where you want to be. This is an important part of growth and progress, and this dark time is great for getting that started.

Stop talking. Even when you’re with people, just sit and listen. I’m not telling you to speak no words at all, but really use this time to be still and observe. Practice being quiet. Even quieter. You will find yourself with a new sense of presence and grounding that makes you come even more alive for the rest of the month.

Especially if you are on your period, do your shadow work. Look into the dark parts of yourself, the parts you keep locked away hoping no one will see and get comfortable with them. They are a part of you, and rather than being locked away, they deserve to be honored and given room to grow and learn.

Under both a new moon and a full moon, it is a lovely ritual to get out under the moon in your bare feet and step on the earth. Ground yourself under her glory and honor her for the power she grants us without every asking anything in return.

Whatever rituals you practice, make sure to make them actual rituals. These are practices you come back to each month, you can journal about them, and watch them flourish.

Thank you so much. All the information is so helpful, esp for me, whom is just realizing her goal to become a cosmic witch. Luna