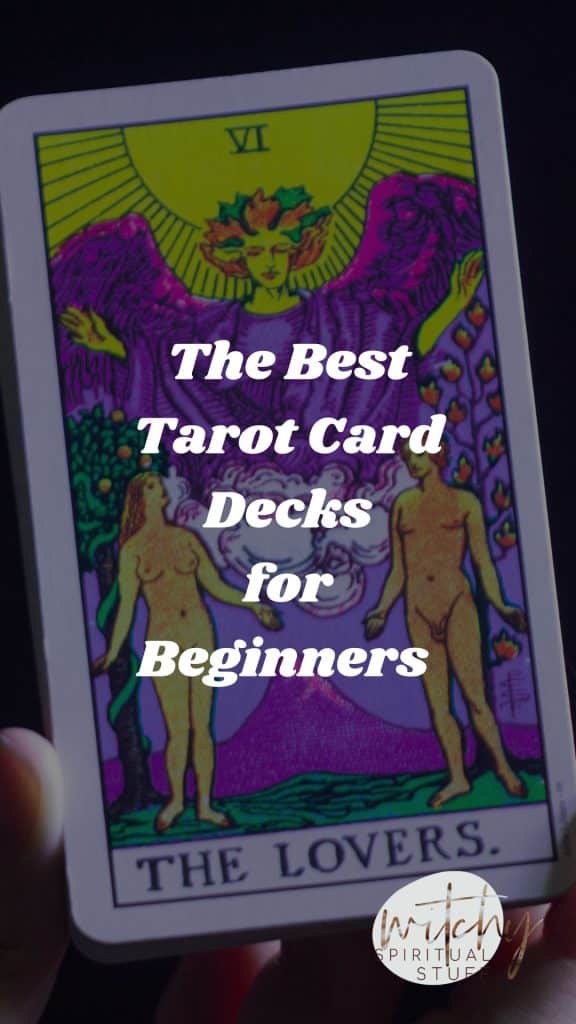 Once you get started looking for the best tarot card decks, you will never stop. It is an endless, lifelong shopping spree of fun.

Even more so than searching for and collecting crystals, I think, hunting for the best tarot deck cards is a work of heart.

And when you begin to actually work with your cards, you find yourself drawn to a whole range of decks that extends beyond just tarot.

But we begin with tarot because it is perhaps the most ancient of all of the card decks in divination.

What began as simply playing cards for the wealthy in the 1300s evolved into a deeply spiritual and metaphysical divination tool.

The cards were originally only used by the rich because, of course, they were hand painted.

Families from nobility would have local artists paint playing cards for them with the family members painted in scenes of triumph, or “trump” cards

It took hundreds of years for these cards to take on their own symbolism, morphing from a simple parlor game to a series of cards with meaning and messages from the Universe.

A few scandalous writers began to pen letters and articles outlining the esoteric knowledge hidden in the cards, but little of this writing had any basis in truth or evidence.

Until the late 1700s when a French occultist by the name of Jean-Baptiste Alliette designed and hand crafted a Tarot deck specifically for divination, and the cards took off as a new way of practicing mysticism.

Tarot readers popped up in every town or city, and people rushed to backrooms with crystal balls to have their cards read.

The Alliette deck, and virtually every deck since, has its symbolism rooted in the Kabbalah, a set of esoteric teachings from the Jewish faith that draws the connection between the unchanging, eternal God and the mortal, finite Universe – humans.

It would be another hundred years before a British occultist, Arthur Waite, would come along and integrate images of humanity into his tarot deck with the help of artist Pamela Colman Smith. Their deck is perhaps the best known today – the Rider Waite tarot deck, also referred to as the Rider-Waite-Smith deck,

Around the same time, fellow occultist Aleister Crowley fashioned a tarot deck that integrated the book of Thoth, a series of ancient Egyptian writings thought to be penned by the Egyptian god Thoth on all matters mystical and material.

There is great confusion still today that the tarot began with the Gypsy Romani people, an oppressed group outcast and spread across Europe for their pagan practices and refusal to adhere to the Catholic Church mandates.

In the western world, the Gypsy Romani were considered some of the original “witches.”

They have been nomadic for thousands of years and typically, like most witches, both feared and revered.

The Romani people have a rich history that is rooted in family and tradition, as well as staying true to their roots, rites, and rituals.

May traveling Romani would stage carnivals or festivals as they traveled, and part of those festivals included fortunetelling through palm reading and card reading.

The Romani fortunetellers did not traditionally use tarot cards, however, but would read from any deck of playing cards, poker cards, or even utilize their own oracle decks – cards specific to their fortunetelling with specific symbols and meanings.

Today, some Romani fortunetellers will indeed use the tarot deck as well.

With that little history, you can begin your exploration and adventure search for the best tarot card decks for beginners.

Keep in mind that there is no right or wrong way to read tarot, but as I used to like to tell my students, and as I tell my homeschooled children today, it pays to learn the rules before you break them.

Picasso learned to paint a perfect bowl of fruit before he began bending reality with his brush.

Master the five-paragraph essay before you switch the conclusion and the introduction.

Become an expert in why things are the way they are, and then play with the rigid outlines, blurring those lines and bending reality as we know it.

That is true magic.

We learn about plant medicine and crystals, about energy healing and grounding, about meditation and divination.

We allow those rules to get loose as they will, gently venturing into new territory, making our own rules, and, well, practicing magic.

The very first tarot deck every beginner should have is the Rider Waite tarot deck. It was the first modern tarot deck, it is one of the most traditional decks, and it is the one most explanations and interpretations are based on.

Can you begin with another deck? Sure.

But it may get very confusing for you if you do.

Rider Waite will help you learn the Kabbalah symbolism as well as the traditional interpretations for the 78 card deck, both upright and reversed.

If you are going to have the Rider Waite deck it seems only fair that you would also have the Thoth deck.

Aleister Crowely was not less of an occultist than his contemporary and nemesis Arthur Waite, and it seems that this may be a case of “to the victor go the spoils.”

Waite’s deck may be more popular in today’s world simply because he had more power, more pull, more friends in the right places.

It is worth the time and the money as a true tarot reading which to give equal energy to thoth tarot – the Egyptians – as we do to the Jewish people.

The Modern Witch deck by Lisa Sterle is a fun update to the Rider Waite deck that includes depictions of women of all races, is LGBT friendly, and is more inclusive for today’s clientele and readership.

It is a great deck among all popular decks for today.

Tarot readers and witches using this deck report feeling seen, heard, and felt by this deck in ways that the Rider Waite deck just cannot achieve.

Another inclusive deck in its own way, the Anima Mundi deck by Megan Wyreweden includes no humans at all but only animals.

Anima Mundi translates to “the world’s soul,” and this animal kingdom-based deck certainly draws on creation and nature to impart Universal messages.

Tarot of the Holy Light Deck

If you love the alchemical symbolism of the Rider Waite deck, the Tarot of the Holy Light deck delivers in spades.

It has intense imagery and vivid colors, bringing divination into living color.

If you love dragons, this is the deck for you.

It includes the types of imagery we imagine from the times of Lady Guenevere and the Lady of the Lake, and will inspire you to open yourself up to a world beyond your five senses.

For those interested in venturing beyond tarot and into the world of oracle decks, the Iris oracle deck is a great bridge as it still contains the classic 78 full bright colors cards.

It is wonderful deck for getting in touch with your feelings.

Another oracle deck that maintains its integrity with tarot and Astrology, the Black Moon Astrology deck draws on images from the night sky and teaches you as it interprets Universal messages for you.

A favorite of any moon loving witch, the Moonology Oracle deck has 44 cards that depict various images of the moon.

It’s a beautiful deck for any green witch seeking to live cyclically.

As a huge fan of Rebecca Campbell, self-proclaimed convert from the hustle and grind life to the deeply spiritual witchy life, I had to include her Work Your Light Oracle Deck.

If you read any of her books, namely her tarot accompanying book Rise Sister Rise, you cannot help but fall in love with her and get excited to work with similar energy.

It will always come down to what speaks to you. Your first deck should be one that calls you to interpret the different meanings in ways that embrace the Universe’s deep love for you and constant willingness to communicate with you if you will just listen.

You don’t need to pull a high priestess card to know that you are on your right path, or that you should be teaching those willing to learn from you.

What you need is to check in with yourself, abandon your ego centered living, and get in touch with spirit.

From that place, you enter the world of tarot, you can choose a different deck each day, or you can work with the same cards for life.

Tarot cards are great tools for a spiritual practice grounded in love and light. My favorite decks have always been the ones that allow a personal connection between me and the divine.

The best tarot cards for you will be the ones that help you become an avid tarot card reader out of a love for that same connection.