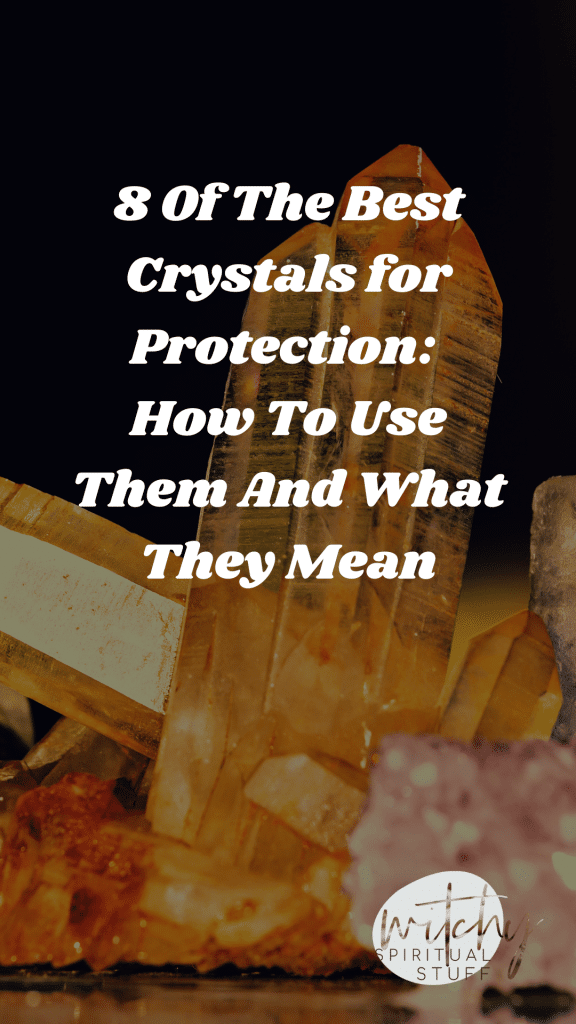 We all know how much negative energy we encounter in our lives, and how hard it is to avoid. One of the kindest things we can do for ourselves is to learn how to block and remove the negativity that bombards us daily.

This negativity can overwhelm us, so we need protection from not only negative energy, but also from direct attack. The people you deal with daily can bring negativity into your life simply by being negative around you, inflicting their mood on you, and unknowingly working against your peace of mind.

Even those people you don’t deal with daily, can send you negative energy. Someone could do a magic working against you or send you harmful energy through their negativity toward you.

Connecting to the earth through protection crystals is one of the best ways to repel negativity. It’s sometimes difficult to know where the negative energy originates, but crystals can help you identify that as well.

Crystals help keep us grounded, help us remove negative energy, or fight off attacks on our person or our psyche. Any number of crystals can help with this protection; however, we will talk here about some of the most popular and easiest to find.

The 8 crystals below are excellent for blocking and removing this energy. Using the energy of these stones can help you maintain your balance in an ever-tilting world and give you the protection you need to deal with the negativity around you.

The top crystals for protection

Black tourmaline occurs when mineral elements flow into fissures and cracks and crystalize and becomes enriched with manganese and iron which enhances its charging energies. Black tourmaline is one of the most powerful protection stones and is associated with the root chakra which gives us balance and stability.

It can also help when the energies around you become too much to handle by helping you feel grounded and balanced. You can use this stone to block psychic attack and help eliminate negative thought patterns.

In addition to protecting against accidents and illness, black tourmaline can bring you good luck. Black is the most common color of tourmaline; however, you will also find tourmaline in blue, brown, colorless, green, orange, pink, purple, and red.

Obsidian, created from magma and lava, can give you dynamic power and protect you from negative energy. It’s also associated with the Root, Sacral, and Solar Plexus Chakras because Black Obsidian forms a shield against negative energy and absorbs the negative energy that can undermine the stability represented by these three chakras.

It balances and transforms negative energy into positive energy which is one of the things that makes it so powerful. Obsidian is also known as a truth stone and can help you find and understand where negativity is coming from, so you can remove it.

You can also use black obsidian for protection when traveling and to protect yourself from ill will, spells, and negative forces that may come to you. As another of the most powerful protection stones, obsidian can also help bring prosperity into your life.

Fire agate is a layered agate that can help you build a protective shield around yourself and is associated with the Heart Chakra. In ancient times, warriors wore fire agate to protect themselves and believed they make the wearer the chosen of God.

The ancient world also believed fire agate protected the wearer from all psychic and physical dangers and granted courage. While most often connected to the Heart Chakra, this stone can attune with all chakras.

Fire agate uses earth energy to protect and enhance. It offers whole home protection as well as enthusiasm and motivation to act. This stone not only protects the wearer, it also gives you the confidence and courage to overcome any obstacles encountered in the physical world as well as the psychic world and helps deflect any negative energy around you.

Lapis Lazuli is a type of metamorphic rock comprised of other crystals including lazurite with calcite, sodalite, and pyrite. It has long been known as the “Wisdom Stone” for its connection to the Third-Eye Chakra; however, it also has a connection to the Throat Chakra.

Ancient Egyptians used lapis to protect against evil forces and since it is a soft stone, they also crushed it for paints and eyeshadow to protect the wearer or painted object. Today, lapis is primarily known for protection from psychic attacks since it breaks down negative psychic energies rendering them harmless.

Lapis can also help you ground, regain, and maintain emotional balance. Known as a stone of truth as well as wisdom, the balance it brings frees its wearer to speak their personal truths without fear because of its connection to the throat chakra.

Clear quartz is composed of oxygen and silicone, and since ancient times, people have used clear quartz to deflect negative energy and attract positive energy. It is most often associated with the Crown and Third Eye Chakras because it amplifies energy

Clear quartz takes on the energies of the stones you use it with, so you can use it to enhance the strength of your protection spells, and your own personal energy. By itself, clear quartz cleanses energy and can help you let go of things that no longer contribute to your greater good.

Believed to be a powerful stone of light, clear quartz brings light to any situation, and can boost the energy of your workings. It also cleanses and heals the body, including the energy body and boosts the immune system for protection from illness.

Amethyst is a crystal rock formation most often associated with the Crown and Third Eye Chakras and can guard against psychic attack by transforming the negative energy into positive. Amethyst alleviates stress, balances mood, and eases anger, fear, and anxiety.

Its connection with the crown chakra enables it to activate intuition and enhances the psychic connection to the universe. Known as the ‘sobriety stone,” it tends to have a sobering effect on the user and can help overcome addictions of all types, and boost selflessness and wisdom.

As with most stones associated with the Crown Chakra, amethyst allows you to become more self-aware, and increase your connection to higher consciousness. It strengthens the energy body to protect from negative energies while amethyst transmutes it.

Selenite is a variety of gypsum and is most often associated with the Crown Chakra. Known as the “goddess stone,” selenite helps shift energy blocks and can provide protection for your entire home.

Named for the Greek goddess Selene, goddess of the moon, selenite is good for conducting energy, and creates a positive shield of protection to enable you to connect to the world around you without danger.

Selenite emits a positive energy and clears the air around it while providing the user with clarity of mind and self-awareness. Its association with the Crown Chakra allows the user to use that clarity and self-awareness to connect with higher states of consciousness and enhance your psychic protection..

Malachite is a green banded copper carbonate mineral created when other chemicals change the composition of copper. It forms as a mass with concentric bands of light and dark green and is associated with the Solar Plexus Chakra. The banding makes this stone unmistakable in most of its forms, although extremely small pieces may not show the banding of the larger stones.

Long believed to absorb negative energy, the ancient Egyptians, Greeks, and Romans used malachite for protection amulets to shield against the evil eye and believed it would warn its wearer of danger by breaking. Some people believe malachite mirrors the feelings of the user while others believe it’s a calming mineral that can encourage positive feelings.

Malachite, like Lapis Lazuli, is a soft stone, and ancient civilizations often crushed it to make eye shadow and paints because they believed it would improve eyesight when worn around the eyes. Malachite also provides protection for travelers and children.

What crystals are good for healing and protection?

You can use your crystals in several ways. You can wear them, hold them, place them around your house, meditate with them, use them in spells, or even use a crystal grid to generate the energy of the stones.

No matter how you decide to use your crystals, you will want to choose your stones carefully and make sure the stones feel good to you. Your stone of choice should resonate with you on an inner level.

At times, I’ve found that those that resonate with me are among my favorite stones. However, at other times, they are not the crystals I would have thought of but they called me to feel their energy and the positive energy they bring me is sometimes greater than that of my favorite stones.

No matter how you decide to use your crystals, and no matter which stones you choose for your specific needs, crystals can energize your life and protect you from harm. Each crystal may come to you at a different time in your life, and most often, your specific crystals will call to you when you’re near them.