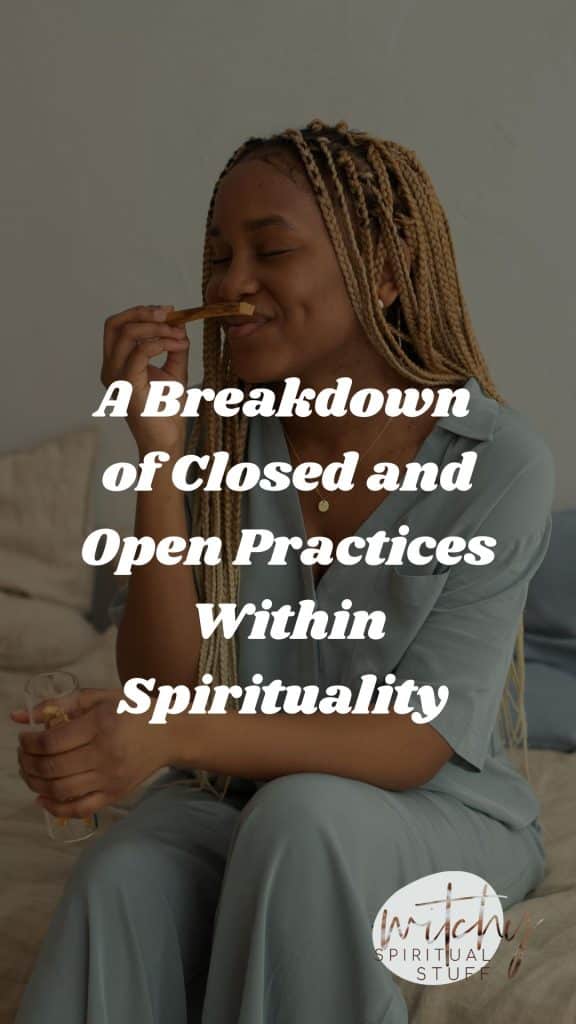 The concept of closed practices is not a new one.

But recent years have brought a rise of cancel culture that makes everyone wary of the words they speak and the things they do.

For witches and other spiritual people building rites and rituals, this wariness often includes the practices in which we engage.

If you’re just hearing about the concept of a closed practice or an open practice, it can be tough to navigate what we’re even talking about, much less how to avoid it.

I want to begin here by talking a little bit about cancel culture craziness.

Ten years ago, in my writing on social media or various blogs, or even in my discussions in real life with friends and family, I used the term “woke” almost indiscriminately.

I would hashtag it.

I was an early social justice warrior; I studied Black history and women’s literature in college, I earned a degree in comparative literature, studying culture and civilization across the globe, at virtually every intersection, and in multiple languages.

I would preach to anyone who would listen about the injustices of institutional racism and the long-term effects of maintaining the status quo.

I remember the early days of shaming people for cultural appropriation, how we would “call out” white people who wore dreads or corn rows, as just one example.

And then I remember when things started getting really crazy.

Grey’s Anatomy actor Jesse Williams gave a speech in 2016 at the BET awards. He was accepting an award for his activism, and he blew our minds with this amazingly poetic narrative on the struggles of Black people for equality.

And he included points on cultural appropriation, noting in particular that the same people who will co-opt parts of a culture will also practice overt racism.

The part that stood out to me the most about the speech was when he called out people who try to criticize the methods of the fight for equality and recognition but have no part in the fight.

It harkens back to the Teddy Roosevelt speech about “the one in the ring.”

Basically, you don’t get to criticize the people actually taking action if you are merely a bystander outside the ring.

All of this was great. I was excited. We were having real conversations around a country that has seen so much hurt about how to heal that hurt.

Then Justin Timberlake went on Twitter and praised Williams’ speech, honoring him and using the hashtag #inspired.

And the world lost its mind.

He was the problem, the woke crowd screamed.

He was the entire reason for Williams’ speech, the mob railed.

And sure, Timberlake has a long history of drawing on Black American culture, from corn rows to musical choices.

But he also grew up in the deep south, in Memphis, Tennessee, singing in the choir in a Baptist church. By all accounts, Timberlake is a friend to Black people and the cause.

If you look up Justin Timberlake and racism on the internet, you will find calls to boycott his albums, shut him down, cancel him, end his career.

Hatred and Divisiveness in Cancel Culture

This, for me, was the beginning of cancel culture, and it has only gotten crazier since then.

I no longer use the term woke in my own self-expression as it has become a harbinger for bad behavior, divisiveness, and sheer hatred.

We used to use the term in an attempt to “wake people up!”

“Look at what is happening!” We would shout from the rooftops.

And it seems, because so many people feel incapable of doing anything about those things, because they are so dyed in the wool, we cancel Justin Timberlake for supporting Jesse Williams.

Or Adele for wearing Bantu knots in her hair and a Jamaican flag bikini at a Jamaican festival.

More recently, people called for a boycott of Goya products because the CEO likes Donald Trump and of New Balance shoes because their CEO had said he like Trump’s pro American business stance.

Note that most of those people calling for cancellations will still rock Nike shoes, a company widely known for using slave labor of the Uygur people in China.

We have clearly lost our way.

Psychologist and Author Jordan Peterson talks about this phenomenon as a result of our lost values in society.

We no longer “put our houses in order first.”

We are marching in the streets fighting invisible ghosts and screaming at each other because we don’t know how to work on ourselves.

This is where witchcraft and spirituality come in.

The most fundamental element of witchcraft is knowing yourself.

You cannot perform magic, work with the Universe, meet God or your gods, work with nature, or manage any real, deep, profound spiritual practice without knowing yourself.

That takes time, work, and energy.

This is putting your house in order.

I was angry, bitter, resentful, and ready to march in the streets over perceived slights myself.

Then I saw what my anger was doing to my marriage and my children.

Now I say, “fighting fire with fire burns the whole world down.”

And it will burn your house down first.

Spirituality helps us pay attention to what is happening in the world and see it for what it is, through the loving eyes of the Universe – a world in pain. Hurt people hurt.

Witchcraft calls us back to ourselves, demands we investigate our own hearts and souls, expects us to take the own dirt from our eyes before we call out the dirt in our neighbor’s eyes.

And it is an open practice, meaning we can mix and match and blend and honor the elements of life and nature in our practice, and we have no gatekeepers.

Instead, we will say, “welcome.”

At the same time, we work to honor the closed practices of other cultures and religions

When witches discovered that palo santo was an endangered species, one that is critical to the spiritual practices of native populations where the tree grows, in South America, particularly in Ecuador and Peru, we stopped buying palo santo.

The use of this element for smudging, or clearing energy from a house by burning the stick, has its origin in these native cultures, and when we deforest their rainforest so we can buy these sticks en masse for our own smudging practices, we are participating in causing harm.

So, the use of palo santo would be an example of a closed practice.

But the art or practice of smudging, saging, or burning herbs to clear energy is an open practice.

And this is where it will take real critical thinking when building your own practices.

There are people among the newly christened “woke mob” who will rail at you for using white sage because it is traditionally used by Native Americans.

But the herb is not endangered, and as long as you don’t claim it was your idea, or part of your cultural heritage, or that you’re Native American when you’re not (yes, people do this), you are not engaging in cultural appropriation.

It’s an Herb, not a Closed Practice

Smudging, using smoke cleansing, and saging in all their forms have been used by native cultures across the globe for a really long time.

In short, we all have ancestors who used smoke in their spiritual practices.

Voodoo is a closed practice.

You are probably not a voodoo practitioner. So don’t claim to be one or engage in practices specific to Haitian vodou.

Just like if you are not Jewish, you should not be walking around the street wearing a yarmulke.

If a non-Jewish man attends a Jewish event, he is invited to wear the yarmulke.

This is the difference between cultural appropriation and honoring another culture.

The key is to be mindful of the practices you engage in in your own spirituality.

And this should be true of anything you do ritualistically or religiously in your daily life.

Interrogate your reasons for engaging, for practicing, for introducing new elements, for incorporating this or that, and be okay with being wrong.

My biggest problem with the woke mob and cancel culture is that it does not enlighten or actually wake up anyone. It does not allow us to say “oh, my bad. Let me work to get it right.”

And the only thing we can really do in the face of this hatred is to keep living, keep loving, and keep learning.

Don’t be afraid to try new things, and don’t be too proud to admit when you are wrong or misguided.

Do your best not to appropriate or engage in closed practices of specific cultures without invitation or initiation.

But also, don’t be afraid to be cancelled.

Our world is better off when speak from our hearts, with unblocked throat chakras, and we engage with different cultures, native communities, indigenous peoples, spiritual paths, and different languages.

You don’t need special permission to have full moon rituals; you don’t have to be a European witch to understand ethical practices, and you can always investigate what is a part of a closed practice.

Do your best, honor your own religious practices, listen to indigenous communities, and travel to different places, learning modern practices and world history as you go.

Remember, as Abraham Hicks says, you can never get wrong, and you will never get it done.