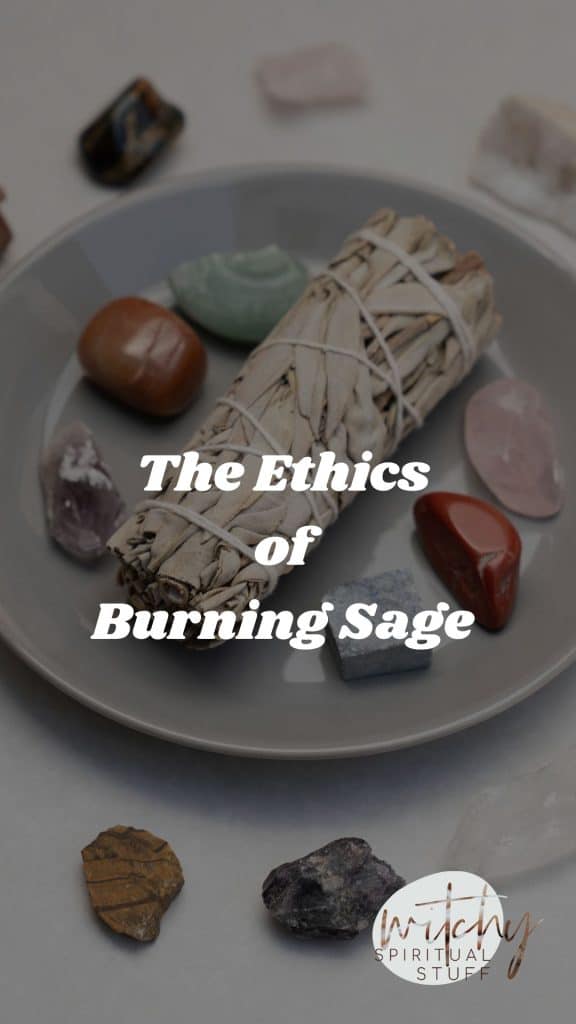 Before we get into the ethics of burning sage, let me say that I am a spiritual witch, not a gatekeeper for Native Americans and their practices.

One thing (among many) that drives me crazy about cancel culture and the woke mob insanity taking place in our society today is the penchant for people of one culture or ethnicity acting as the police for another culture of ethnicity.

Typically, we find white women and sometimes men screaming about what other white women and men are doing that in some way is cultural appropriation, racism, prejudice, etc.

A great example of this reality is when Adele showed up at the Notting Hill Carnival in England with Bantu knots in her hair and a Jamaican flag bikini.

The festival was a Jamaican festival. She was honoring the people of the festival.

But white people lost their minds, took to Twitter, and called for her cancellation because of her cultural appropriation.

Meanwhile, many Jamaican people came to Adele’s defense, calling her choice of style that day a clear display of honor.

Or the major push on behalf of the woke to use the term “Latinx” when referring to people of Latin American descent, while virtually every Latino person interviewed on the subject has said they dislike the term and that it does not even make sense to get rid of the gendered version of the word when the entire Spanish language is itself gendered.

So, while I am a white woman (full disclosure), I am not here to tell you what to do or what not to do. I am not here to call you a cultural appropriationist, to make you feel ashamed of your practices, or to “call you out.”

I am here to share the information I have in a clear and logical way, and to respect you as a grown ass woman (or man. I know there are a few of you out there among my readers.) to make your own decisions.

The History of Burning Sage

First, sage is not exclusive to Native American communities.

Sage is an herbaceous plant native to the Mediterranean as well as to the southwestern United States and northwestern Mexico.

It has grown naturally in France and Rome for thousands of years, and immigrants from Europe brought it to the United States.

So, saying that sage is native to indigenous communities in North America is like saying that pizza and spaghetti are native to Italy.

Tomatoes are native to the Americas and only arrived in Europe after colonization began in the 1500s.

So, we all mixed and matched and combined and evolved with our own practices and materials.

And indigenous communities around the globe have been practicing smoke cleansing for millennia.

Having said all of that, somewhere along the way, Native Americans did adopt sage into their own smoke cleansing practice, and they used the herb as a means of clearing negative energy, banishing unwanted spirits, and welcoming in new, fresh energy.

Saging promotes healing and wisdom in these practices.

We use the term saging when the practice of taking a stick of gathered dried sage is burned and the smoke is spread around a space or a person.

We use smudging or smoke cleansing to refer to the same practice using any other stick or herb.

Again, this practice is not specific or unique to Native Americans.

Smudging is a practice that originated in antiquity and has been recorded from civilizations around the world, from the Celts to the Romans, from the Chinese to the Egyptians.

Virtually every culture has used smoke cleansing, and all for basically the same purpose.

Renowned biologists Bret Weinstein and Heather Heying, a married couple who themselves were victims of cancel culture in Seattle, Washington a few years ago, note that this collective is a new form of cult, in that it seems to have no real adherence to logic or reason, and indeed the more you try to reason with them, the more they double down.

This collective has been growing on hate in the name of social justice for several years now, and the fervor is getting stronger.

The idea of saging as a closed practice seems to have risen as a result of this fervor.

What happens is that the mob gets wind of something that may or may not be a form of cultural appropriation and they raise this issue to a status worthy of being burned at the stake, taking down anyone engaged in this practice.

No discussion, no trial.

Only frothing in an echo chamber and a straight shot to the execution.

It looks like this process is what has been undergone with regard to sage.

Someone somewhere noted that people in the west, probably mostly white people, were using sage to smudge their houses or yoga studios.

They learned somewhere and somehow that the use of sage was exclusive to Native American spiritual practices.

And they screamed bloody murder about cultural appropriation.

At which point the internet told everyone that only Native Americans can use sage and that in fact white sage is endangered.

The Reality of Burning Sage and Other Sage Practices

As with many of these cancel stories, the reality is rather far from the truth.

It takes a very simple internet search to see that none of these claims come close to reality.

Sage has been used around the world throughout history for smoke cleansing and other medicinal purposes.

Cultural appropriation requires the use of a practice specific to one culture by another culture that causes harm to that original culture.

None of these things are taking place with relation to sage.

Further, sage is not endangered.

There was a short period of time where white sage was put on the endangered species list, but even that has been removed.

A closed practice is one in which a specific culture or religion can lay claim to exclusive use of a material or ritual for their spiritual or cultural purposes.

That is not what is happening with sage, as we have already seen.

An example of a closed practice would be Haitian vodou, Roma hoodoo, but even in those, you will be hard pressed to find materials and rituals that are not at least loosely related to other spiritual practices in history.

As with most things, we have more in common than we do in difference.

I grow sage in my yard in various pots as it thrives in my region, and I use it to smoke cleanse my house once a week.

I also put sage in my soups and stews when the flavor and aroma are called for, as the healing properties of sage go far beyond just smoke.

Sage is a powerful healing herb that contains flavonoids, which are plant compounds that have medicinal properties.

Studies have shown consumption of safe aids in brain health and guards against diseases like Alzheimer’s.

It is high in vitamins and nutrients, and packs a large punch in a small amount.

You can find protein, iron, calcium, and manganese in sage, as well as Vitamin K and Vitamin B6.

It is also loaded with antioxidants, and it supports oral health.

Burning with Sage Not a Closed Practice

So, realize that when I tell you that burning with sage is not a closed practice, I am speaking to the evidence only, not my feelings.

I am a spiritual witch grounded in logic and reason, and I have no doubt that we are all created by a divinely loving Universe and made of the same material that makes up the earth upon which we stand, whose food we grow and eat.

This is not metaphysical or ethereal.

As such, it makes no sense to say that using sage to burn, to brew into tea, or to throw in soup, is a closed practice.

Indigenous cultures show us the way to reclaim our better selves in many ways, and we would be remiss if we did not pay close attention.

At the same time, of course we must honor truly closed practices like the use of palo santo, an endangered tree used by the native peoples of South America.

We have a lot of spiritual work to do in North America; a lot of negative energy is infecting the United States, and it is up to each of us in our spiritual practices to put our own houses in order and expel negative energies.

It may take a sage bundle and the practice of smudging, sage sticks and other sacred plants or medicinal plants, and the welcoming of good spirits alongside the refusal to believe in or bow down to evil spirits.

Non-indigenous people came from indigenous people at one point in time, and we would do well to honor our ancestors’ connection to the spiritual realm and the spirit world by worrying less about what is happening on social media and paying more attention to growing our own sacred ritual, developing good vibes in each smudging ceremony, and understanding the failure of traditional medicine to serve our total wellness.

The first step to energy cleansing is to open our heart, embrace positive energy, and welcome the spiritual world into our daily lives.