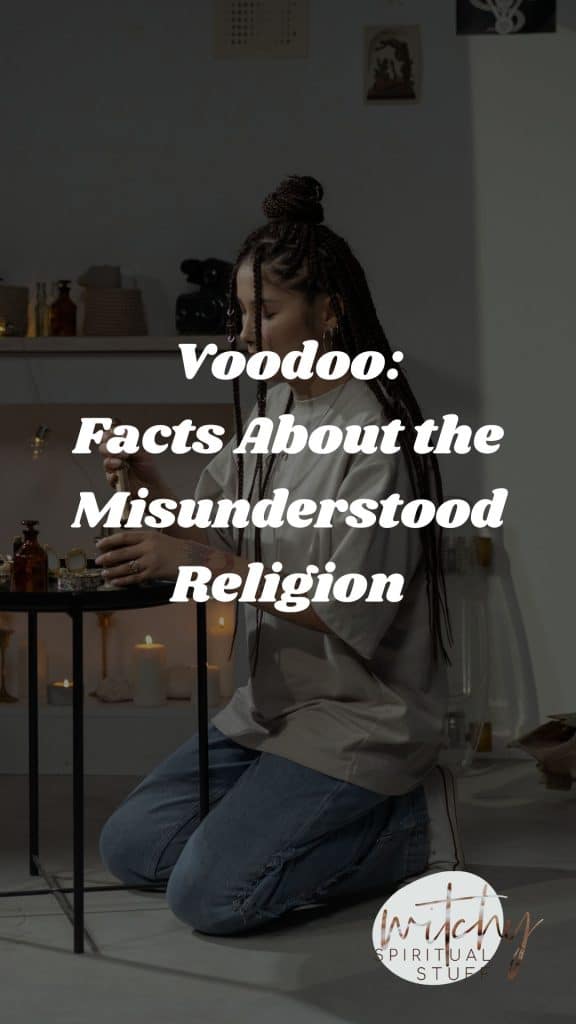 Thanks to the western tradition of turning everything with power that lies outside the mainstream into a negative, scary, evil, voodoo has gotten a bad name.

But the truth is that voodoo is just another word for witchcraft, practical magic, spirituality, and paganism or even accepted religious practice.

Much like the fighting over different gods that has taken place for the last several millennia, voodoo has come to represent dark magic in the minds of those in the west not because of its actual practices but because of misunderstandings and misinformation.

The Spread of Religions on the World

Since virtually the beginning of thought and language, of consciousness in humans, we have had religion.

We shape ideas around natural occurrences, we observe human nature, and we attribute what we cannot understand to “god” or “gods.”

We give those gods humanlike qualities, jealous, fickleness, revenge, lust, love, and so on, to describe why bad things happen, and then we line up rules for how to live based on what we think will please those gods and make them shine their light on us.

All civilizations large and small have had their own spirituality and religious practices.

Unfortunately, the Roman Empire was at its height around the same time Christianity was spreading like wildfire as an offshoot of Judaism, and the empire adopted the religion to use it for its own tools of power, installing it in every land under its purview across the world.

The god of Abraham, Yahweh, is the same god Jesus preached about. It is just that the Hebrews and the Christians see him in a different light.

The Hebrews, now the Jews, see their god is fierce and ferocious and they develop an individual relationship with Him and build community around Him.

Jesus came with a sort of update, if you will, preaching that God is love. Jesus was a devout Jew who merely noted that we had gotten a bit of it wrong when it came to God.

He told us that God is forgiving of all, open hearted and open armed, and that we have power to manifest all of our abundance on earth.

Indeed, he noted, those of us humble enough to surrender to God’s will, which is love and only love, shall inherit the earth.

Then, about a thousand years after Jesus left the earth on angel’s wings, another prophet came along in the East.

Muhammad was a follower the same god that Jesus and Moses spoke of, the god of Abraham.

But, again, he had an update.

He offered stricter rules, more obedience to law, and total submission to the will of God, which, sadly, was not just love.

Thus, the rise of Islam began.

These are what are known as “the big three.”

All three, fight though they will, are praying to, speaking of, honoring, and indeed fighting in the name of, the same god.

All other religions, to these three most widespread across the world, are considered pagan religions.

Pagan simply means outside of the mainstream.

Again, sadly, with the exception of Judaism, which has no interest in recruiting, the other world religions have been twisted, manipulated, perverted, and shoved down the throats of pagans for millennia.

People have been tortured, oppressed, and killed, all in the name of this truly loving god.

If you look at the actual literature in all three books – the Torah, the Bible, and the Quran – they all preach about a god of love, of tolerance, and of forgiveness.

Of course, those books were written by, and interpreted by, men in a different time, with their own human proclivities and limitations.

As Jesus himself said, “forgive them father for they know not what they do.”

Those of us outside of the mainstream had no intention of shutting down their religions, but they surely were determined to shut down ours.

So women who were once healers became terrifying wicked witches.

Healing and helping practices across the world came to be known as witchcraft.

Voodoo is merely another casualty in that war.

Surely by now you have heard that there is no dark magic, there are only dark practitioners?

The energy for the Universe is only positive, is only love.

Negative energy can only be manifested by humans, and it takes a tremendous amount of will to exert this energy into manifestation.

As Abraham Hicks has said, positive energy is one thousand times more powerful than negative energy.

Thus, if you stand in love, a truly loving space, you cannot be shut down, shot down, or taken down by someone’s “curse” or “bad wishes.”

But, again, pagan religions have always had to ascribe bad things that happen to their gods.

Even in Judaism and Christianity, they say “god’s will be done.”

In the Muslim religion they say, “if Allah wills it.”

What every single religion or spiritual practice misses, somehow, is the will of men and women.

We dramatically underestimate the power of each of us to set our intentions before we come into this life and then to exert our will upon our own lives, attracting negatives and positives according to our own energy.

It really is that simple.

God, nature, the Universe, Source Energy, the gods, are not doing anything to you.

And while it may seem like “mysterious ways,” and of course from our limited human perspective, they certainly do seem mysterious at times, we can place our faith in the fact that no matter what is happening, it is always working out in our favor.

To lock yourself into any organized religion, large or small, is to limit yourself to its beliefs, good and bad.

What Is Voodoo, anyway?

Voodoo is the “witchcraft” of the Caribbean.

Africans were stolen from their land and brought to the islands through the slave trade. A part of that process was breaking up tribes and separating people from each other based on language, identity, and culture.

It is much easier to control groups of people who are divided and mistrustful of each other.

Each tribe in Africa had its own spirituality, religious practices, and belief systems.

And Roman Catholicism was forced on the slaves by the leaders of countries who believed they were doing a service to their god by sending him more “saved” souls.

Understandably reluctant to give up their own practices, but forced to practice this new form of Christianity, these enslaved people combined the two.

They incorporated Catholic saints into their practices, kept their African religion in their way of life, and created their own official religion.

Though Haitian Voodoo is the most well-known, various forms of this amalgamation is common throughout the islands, into Latin America, like the Dominican Republic, and even in the Southern United States, like Louisiana voodoo.

Things like dark magic, voodoo dolls, and human sacrifice are no more common in voodoo than they are in any other pagan religion, including western witchcraft, and are merely bogeymen to scare people in popular culture and create more division and separation among human beings for purposes of control and exertion of will.

If we keep people afraid of voodoo and afraid of defying the Christian god, we can keep them Christian, whatever that even means at that point.

The reality is that voodoo has always been a spiritual and religious practice that helps followers honor their god or gods, that helps keep them honest and humble, and that allows them to work within and navigate the forces of nature.

Voodoo rituals and voodoo practitioners, voodoo traditions and voodoo temples, are really no different from witchcraft or even the big three.

Think about it: Catholics “drink the blood and eat the body of Christ” as part of their weekly rites.

And those are just the most well-known rites and rituals.

Religious practices in voodoo honor communication with the spirit world, banish “evil spirits,” or negative energy, survive in this new world, and turn a really, awful, bad thing into something positive.

Spiritual leaders in these practices, whether West Africans or New Orleans voodoo practitioners, teach a practice of voodoo that is inclusive, celebrates the Black woman and other people of color, and elevates voodoo ceremony and voodoo practices to joyful and community-based experiences.

Voodoo offers connection to its followers, belonging, protection from the ills and ailments in a world unkind to people of color, and a sanctuary from those ills.

The word voodoo has come to mean spirit possession and zombie movies, child sacrifice and such things, and it is high time to eradicate this fear of vodou and accept folk religion for those who follow it, make room for the voodoo priestess as we should for the witch, and see voodoo for what it is, a spiritual practice that is not ours to meddle with.