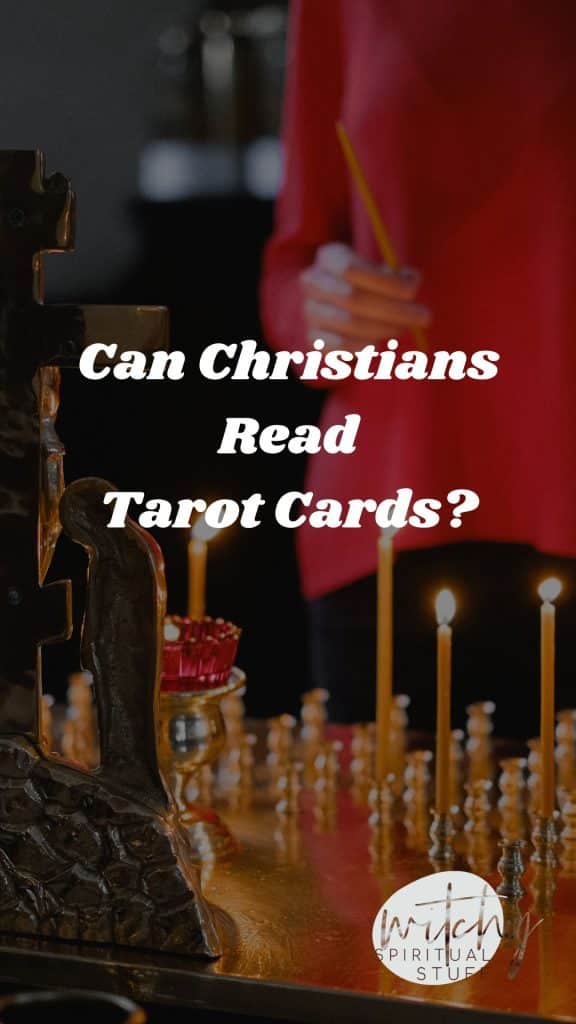 There is nothing in the bible that says not to read tarot cards or to work with divination tools.

But of course, there is a ton in the bible that has been interpreted as saying not to read tarot cards.

So, for the Christians among us, and for those of us engaging in these conversations with Christians or about Christianity, it is a worthwhile endeavor to mine through the literal and interpreted language on all things witchy in the bible.

First, let’s get this out of the way – I am not a Christian witch.

There are some witches who ascribe to this label, practicing Christianity in an open interpretation, loving, devout kind of way.

It’s a very loose way of reading the bible and practicing the Christian faith. The Unitarian churches welcome gays and lesbians, people of all colors and backgrounds, and consider themselves inclusive.

Unitarianism is a community for people who want to follow the teachings of Christ without all the hangups and strict enforcements found in most Christian churches.

Christian witches belong in this category.

I am not a Christian witch.

I am not a Christian.

My mother likes to dispute this.

“Yes, you are a Christian. You believe in Jesus Christ and follow his teachings.”

I do believe that Jesus lived. I do believe he was an amazing man and an inspired prophet, a seer of sorts, a witch in his own right, if you will.

I believe Jesus had insight, used his supernatural gifts given by Source Energy, and that he used the language and understanding of his time to try to teach others what he understood.

Then, I think the Roman Empire and then the Catholic church made him a god.

They turned him into a deity.

Something separate from the rest of us.

Someone to pray to.

Someone to aim to be like knowing that we will always fall short.

What It Means to Be a Christian

The church, for the most part, describe a Christian as someone who believes in the uniqueness of Jesus Christ in terms of the virgin birth.

Indeed, Rebecca Campbell explains in her book Rise Sister Rise that the actual definition of “virgin” means “one who is sexually autonomous.”

A woman in control of her own body and making her own choices about her sexuality.

I don’t buy that Jesus was born from a woman who never had sex.

A Christian believes in only one god.

The Necessity of the Cross

Christians believe in the necessity of the cross.

So this one is tricky.

You have to believe that God sent his only son to earth to be sacrificed for the sins of all of humanity.

First, Jesus himself said “all of these things you shall do and still greater.”

Jesus was telling us that he was not unique.

For me, the greatest part of Jesus’ story is that he was a “mere man.”

That any of us could be Jesus with enough love and few enough blocks in our lives.

I love that he lost his mind and flipped tables over and whipped bankers in a rage over what they had done to the people.

I love that he lost his faith in the very end. “Father, why has thou forsaken me?”

I love that, by all non-Christian accounts, Jesus was indeed likely married and had children, and his wife was probably Mary Magdalene.

It is ridiculous to think a God-fearing man of Jesus’ age was neither married nor a father. Also, Mary Magdalene was the first person he revealed himself to. His greatest earthly love.

Secondly, I do not believe that God sends anyone to earth for anything.

The primary purpose of the Universe is expansion.

Each of us, in our spirit forms, have the choice to set intentions, to come into these human forms, and to have the human experience.

Perhaps Jesus, in his spirit form, set the intention to shift the conversation from fire and brimstone in the Hebrew bible to the love and light we see in his teachings.

And perhaps he had some insight into how it would all likely playout; you don’t shift an entire religion and upset an empire without some serious repercussions.

So, yes, I can see how the cross, the crucifixion, was a natural outcome of the intentions of Jesus, and how he would have accepted that outcome in his foresight, the infinite power and wisdom we all have when in spirit form.

But I reject the idea that his crucifixion was necessary to the salvation of humans.

Indeed, I roundly reject the idea that humans need salvation, which may be the most unchristian thing about me.

Finally, Christians believe that the scripture was inspired by God.

I believe that all creative writing is inspired by God, by Source Energy, by the divine.

But I also believe that all writing is interpreted by man, no matter who the man is.

As Abraham Hicks says, “Humans. We love you so much.”

We are human. We interpret using the tools, the language, and the understanding that we have.

This is true of Buddha, of Moses, of Jesus, of the Prophet Mohammad, and so on.

And it is true of the men who write down their accounts of what they experienced.

Then, the books for the bible were hand chosen by men who had a clear agenda – controlling the flow of information.

So you can see why, while in the strict biblical definition of a Christian – someone whose behavior and heart reflects Jesus Christ – I might be considered a Christian, I certainly do not identify as one in terms of the religion.

Which brings us to the question of whether Christians, those who identify with all of the above, can read tarot.

Still, my answer is yes.

Look, the biggest fear about tarot in terms of scripture is the referendum against “mediums” as well as the admonition against “sorcerers, witches, diviners, fortune tellers, and readers of omens.”

Again, we must look to the context of the times, to what was being warned and cautioned against.

All of this scripture is from the Old Testament, in a time when most people believed in multiple gods, in good and evil, and many went to sorcerers or fortune tellers to help them figure out their lives.

And many of those sorcerers, like today, were steeped in bad intent.

They gave bad omens, they practiced blood sacrifice, they encouraged jealousy and strife.

The scripture, clearly, is warning against that.

There can be no other interpretation.

For, clearly, divination (communication with God) and magic (working with natural laws and Universal forces) are not strictly forbidden in the Bible.

Jesus walked on water and healed the sick and then encouraged us to do the same.

So, I would argue, and it has been argued by scholars much more informed than me, that what is being forbidden in the bible is dark magic.

I would even allow that we should not be working with mediums, meaning other people who interpret the will of God, as, again, they are always going to be interpreting through their own specific lens.

And, again, they may have less than altruistic intentions and agendas.

Everything we learn in spirituality is that we need never seek answers outside of ourselves.

And we certainly should not be involving ourselves in dark magic.

Who has the energy to waste on that?

But tarot is merely a tool to communicate with God.

As is the Bible.

The cards are ways of understanding yourself, of looking into your heart and into your shadows, of growing your own self-awareness, and can be a wonderful means of drawing closer to God, to Source Energy, to the Universe from which you came.

Christians can read tarot cards with pure hearts, with an openness to the Universe, with a willingness to relinquish the ego.

Christians can read tarot cards when they recall that the scripture “thou shall not suffer a witch to live” was about not providing a means of income to charlatans who provide no access to God, who practice dark magic.

And that you don’t need anyone else to give you access to God.

Christians can read tarot cards, or do anything else they like, from a place of alignment with Source.

And when you are aligned with Source, you have nothing to worry about anyway.