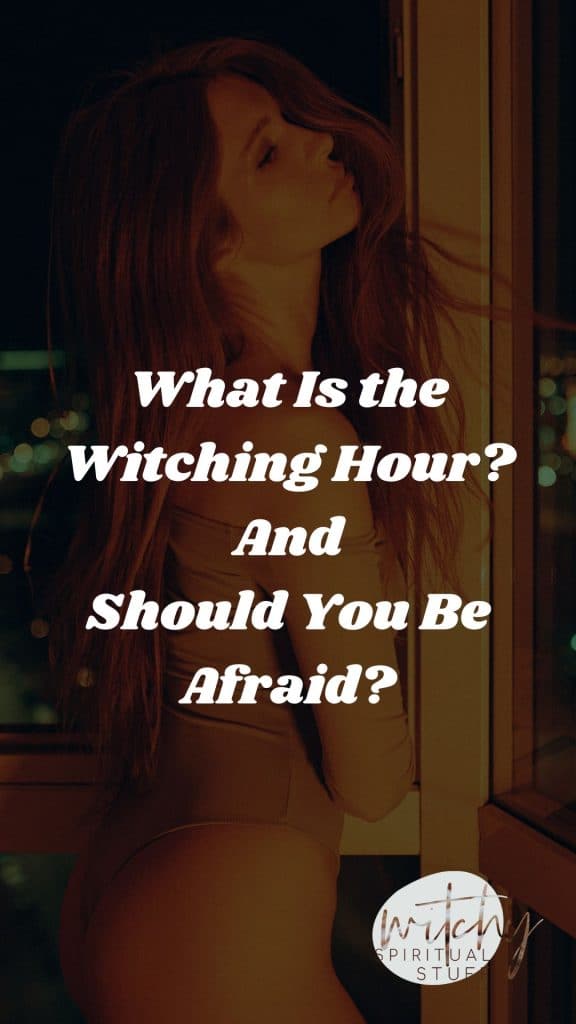 No. You should not be afraid of the witching hour.

So, let’s be sure we clear that up right now.

As with most things (okay, let’s be honest, all things), there is both a metaphysical and a scientific explanation.

You can take one or the other, and I prefer to take both.

I am a witch, through and through, but I am also a clear-headed lover of logic.

One of my favorite quotes I heard years ago says something along the lines of “the more science tries to disprove the existence of God, the closer it comes to discovering it.”

I use the noun “it” here because I refuse to ascribe a gender to a consciousness or energy.

Gender and sex are human realities, not metaphysical ones.

God, Nature, the Universe, Source Energy, is not concerned with temporary states of being, like our human issues, aside from the fact that our humanity, all of it, contributes to the expansion of the Universe.

Indeed, even when we discuss issues of the divine feminine or the divine masculine, we are talking about issues that concern us as humans, striking the balance between giving and receiving, providing and creating, protecting and harboring.

Outside of human reality, all of these divisions and differentiations are merely one united energy, all in a blissful flow of love.

God, in whatever form you want to understand it, exists. All that means is that there is something much larger than our mere humanity that connects us all and that we are all connected to, that we all come from and that we will all return to.

What is the witching hour?

The witching hour has been defined in two ways – either the hour just past the stroke of midnight or the hour between 3AM and 4AM.

Both of these times are designated as times when “the veil is thinnest.”

The veil is a reference to the thin or ethereal fabric between life and death, this life and the spirit realm, our consciousness and the greater consciousness to which we are all connected – God.

The first one, midnight, seems entirely arbitrary. Humans are afraid of the dark, and midnight just feels like a good middle point in the dark to be afraid.

So we created the idea of the witching hour at midnight to caution humans against staying out, and potentially getting into trouble, after dark.

The second one, 3AM, seems to have a bit more behind it as humans tend to naturally wake up at that time, so to call it the witching hour is a response to that phenomenon.

In both cases, there are arguments to be found in both the spiritual and scientific worlds.

Midnight in the spiritual world feels like a natural witching hour time because if we want to engage in practical magic, it is not too much of a stretch to simply stay up later than we might usually stay up to honor the full moon, cast a spell of intention, or grieve the dead.

3AM feels even more intentional in terms of the witching hour because if you wanted to honor this time slot, you really do have to wake up at 3AM, or before that, to engage in any type of witching hour ritual.

It is actually a global and historical phenomenon for humans to wake up at 3AM, and then, of course, before we had science, we needed to tell stories about why we behave the way we do.

And, of course, humans are naturally afraid of what we don’t understand, so we told stories about ghosts and demons, about communing with the devil and more madness all to scare children make enemies out of what we deemed foreign.

The scientific explanation for calling midnight the witching hour can related to many things.

We have to open ourselves to be curious and explore possibilities – the very nature of the scientific method.

Midnight then represents a wonderful time to honor this openness as it is a transition from one day to the next. We are in a momentary shift from one “time” to another “time.” From the past, into the now, into the future.

Midnight is the placeholder if you will for transitions, so scientifically, we can see how humans would look to that time as a thinning of the veil.

3AM has even more scientific backing to it because of the aforementioned natural phenomenon of waking up at 3AM.

Do a simple Google search and you will see page after page of this question “why do I wake up at 3AM?”

There is a simple scientific explanation to this phenomenon – humans naturally shift from deep sleep into lighter sleep around this time.

If you go to bed around 11PM, your brain enters deep sleep rather quickly and stays there for a few hours. Around 3AM, you shift into the lighter sleep that will prepare you to wake up in a few more hours after that.

As you make that transition, you will naturally wake up.

Now, as to why you are worried, it has nothing to do with ghosts, goblins, and demons, and everything to do with your own anxieties that you are not addressing while you are awake.

Your psyche works hard to manage all of your stresses and anxieties, and much of it is dealt with while you sleep.

If you are not addressing it during the day, you are putting an extra load on your sleeping mind, which is alive and active when you wake up at 3AM.

So, work out your issues, and while you still may wake up at 3AM, you can also go right back to sleep.

What Can You Do with the Witching Hour?

If you enjoy rituals, you can absolutely work with the witching hour to practice your magic. You can honor the full moon at midnight, you can put out your moon water and say a little prayer of intention to the Universe, or you can just sit up and watch a movie until midnight on a new moon.

As a practicing spiritual witch, I advise against exploring or even dipping your toes into dark magic of any sort. It only opens you up to negative energy, of which there is plenty to tap into here on earth and can only bring you more negativity.

As far as the 3AM witching hour, if you wake up and you find you cannot get back to sleep, get up, have a glass of cold water, use the restroom, and lie back down to rest.

If you still cannot go back to sleep, open your favorite book and just go with it.

There really is nothing to fear but fear itself, and the more you simply honor your natural rhythms and be in the moment, accepting it for what it is, the more you are likely to drift right back to sleep and get as close as you can to your 8 hours for the night.

What Is a Witch?

To close out this conversation, it pays to remember that a witch is a person who honors the laws of nature, who works with the natural energies of the Universe, and who learns to manifest through these practices.

You do not have to wear a pointy black hat, have green skin or a wart on your nose, and you don’t have to cast spells.

I make teas with loose herbs and spices, I meditate and do yoga, and I live with the seasons of my region.

A Witch’s Role on Earth

Our role on earth, those of us who practice this kind of “magic” is to model for others that we can live in peace, freely, and build community amid all the madness that seems to be so eager to grab our attention and make us afraid.

We get to create our own realities, and we get to find the others.

A true witch in this sense is just a person who is open, curious, and excited to be on the leading edge.

We love science, but we also understand that science has not figured out how to explain everything, and that everything does not always fall under the realm of science.

We don’t actually need science to prove the existence of God because that is not the role of science.

Science is here to describe the physical properties of what we experience.

For explanations of the metaphysical properties, we have philosophy, literature, and of course, magic.