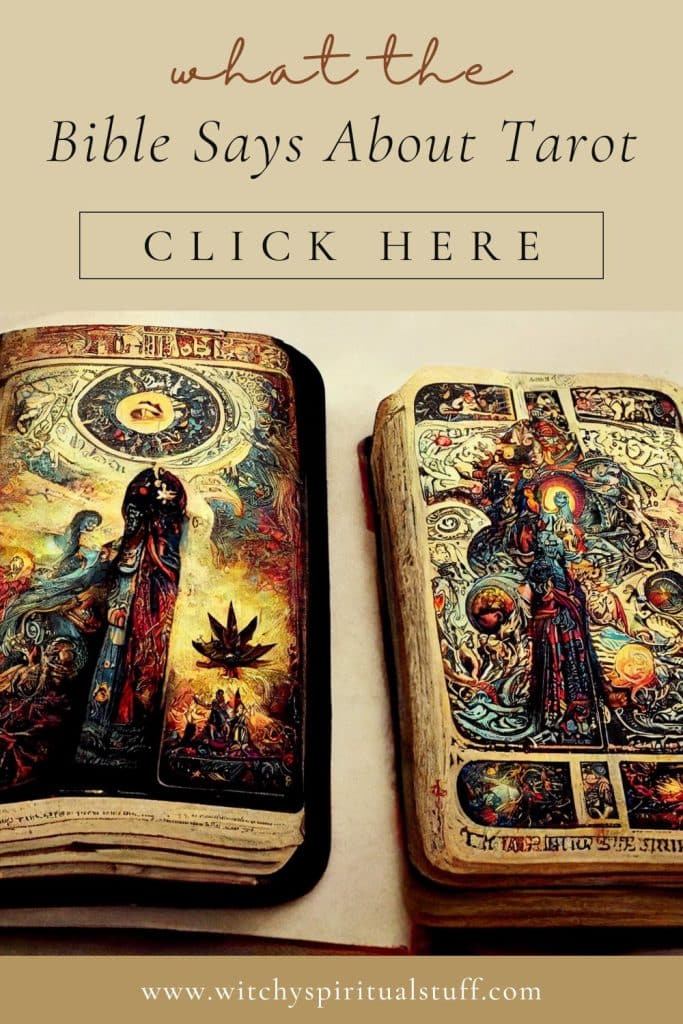 Are Christians allowed to read tarot cards? And just what exactly do God and the Bible say about tarot cards?

If you’re Christian or just interested in the Bible, then you understand the importance of faith and the ten commandments. So it’s important you understand what you are and aren’t allowed to do according to your God and your religion.

How are Tarot and the Bible related?

So what does the Bible actually say about tarot cards?

Well, in short, nothing.

Tarot cards are only a couple hundred years old.

But that does not mean we cannot interpret or draw conclusions about what God might say about Tarot.

The God of Abraham

The first stories about the God of Abraham come from the Torah, which are the five books of the story of Moses, who lived, by all accounts, around 3500 years ago, in 1400 BCE.

The Hebrews were a singular people during their time, as they were the only ones who believed in one god. All other civilizations believed in many gods.

The Old Testament: Who Is Moses And What Does He Have To Do With Tarot Cards?

You have likely heard the story of the Prince of Egypt, the baby found in a basket who was sent up the river because the Pharaoh of Egypt was told by a prophet that his Hebrew slaves would rise up against him.

So, of course, the Pharaoh ordered all Hebrew babies to be murdered.

So Moses’ mother sent him up the river with a prayer to God to save her baby boy.

The Pharaoh’s daughter happened to be by the river as this baby floated by, and she took him in and raised him as her own.

He grew up alongside her other son to be a prince of Egypt until he realized he was Hebrew and left to lead the rising of the Hebrews against the slavers, the Egyptian Pharaohs.

In a classic brother-against-brother battle, Moses is pitted against his adopted brother, now the Egyptian Pharoah, King Ramses II.

What follows is the story of the plagues “sent by God” to Egypt that show God in favor of the Hebrews. Ramses finally caves and allows the Hebrews to go free.

And Moses leads his people out of Egypt and through the desert for 40 years, at the end, he goes into a cave on Mount Sinai and talks to a burning bush (an angel of God) who delivers the Ten Commandments.

From there, the Hebrews settled in Canaan.

The rest of the Old Testament is filled with the generations of Hebrews, or Jews, who rose to power, failed, succeeded, learned lessons, and struggled to find their path to God.

There are many stories in Exodus, Leviticus, Deuteronomy, Chronicles, in Samuel, and more.

And they all say things like, “rebellion is like the sin of divination,” and “he sacrificed his children in the fire of the Valley of Ben Hinnom, practiced divination and witchcraft, sought omens, and consulted mediums and spiritualists. He did much evil in the eyes of the Lord, arousing his anger.”

Witchcraft, Divination, and The Bible

So, let’s get clear on this.

First, these are English interpretations of Aramaic, ancient Greek, and ancient Hebrew.

So when they use the word “witch” and “witchcraft,” it has also been translated as “poisoner” and “practitioner of dark magic.”

It is critical to note here that Moses practiced magic. He parted the red sea.

The Jewish people have a long history of practicing magic, creating golems to protect them from enemies, and more.

The admonitions here in the Old Testament are against dark magic, blood sacrifice, and evil.

I would argue that when the bible talks of “seeking omens and consulting spiritualists,” the admonitions here are about trying to interpret the word of God for other people, which is, still today, dangerous territory.

We see this today when we are watching women’s basic human rights stripped away.

Here is the danger of interpreting the word of God for yourself and taking action in the name of that God.

Here is where we see that the relationship between the bible and tarot is one ripe for interpretation.

Here is where we see that living a Christian life under the gaze of a loving God is about living with God in your heart.

Not at the tip of your sword.

So Jesus comes along hundreds of years later, a Jew in the Roman Empire, and tries to set things straight.

He tells his followers that God is love.

To love your neighbor.

To love your enemies.

To turn the other cheek.

To take the branch out of your eye before criticizing the speck of dirt in another’s eye.

And still, man manages to misinterpret his word, to kill in his name, to claim territory, and enslave people in the name of Jesus.

This is what the God of Abraham is railing against in all of his admonitions throughout the bible.

Those are the witches, the practitioners of dark magic, that should not be permitted to live.

And when we say, “thou shall not suffer a witch to live,” we are not saying, “kill the witch.”

We are saying, “do not give them your money.”

Do not give them a living wage.

Pay them no mind.

Why does it always go straight to murder and mayhem?

“Humans. We love you so much.” As Abraham Hicks is fond of saying.

The Bible and Tarot

When tarot came along thousands of years after the God of Abraham spoke against witchcraft.

And Tarot was never designed as a means of practicing dark magic.

Indeed, it was originally a common deck of playing cards designed by a French artist named Etteilla, who painted the cards by hand for wealthy families.

He added those extra 26 cards to the original 52 to increase the game’s pleasure.

This was in the 1700s, and the cards were only used as divination tools much later, as fortune tellers began to use cards to look into people’s lives.

For, after all, it is all subject to interpretation.

The Bible is not the actual, living word of God.

It simply cannot be.

God does not have a pen.

And men are naturally and necessarily flawed and limited.

It is the human experience.

Then, to take it further, whoever is reading the bible to you is necessarily influenced by their own biases.

For this reason, I always suggest people read the bible for themselves.

And read tarot for themselves.

It is a good cautionary tale to warn people against going to mediums.

Just as Jesus warned against going to priests and moneylenders.

There will always be a bias, and quite often, there will be an agenda.

It is up to you to have a relationship with God, your creator, and Source Energy.

How to Read Tarot and the Bible

So build that relationship.

Before you do any reading, any at all, build a relationship with yourself.

Know that all of your negativity comes from your human conditioning, it stems from fear, and then work to release that fear.

You can even find religious tarot cards, and use them to help interpret what you’re reading. You just have to be willing to practice with them to understand what they really mean. Sometimes the energy can feel different than say, a Disney Tarot Deck or what-have-you.

Get deep into love.

All of your positivity comes from your natural state – love.

Love is the channel that unlocks your relationship with God.

You must love yourself first and then extend that love outward, unconditionally, and with firm boundaries that keep you in alignment.

How do you use the Bible with the Tarot cards?

I say this last part because so many people interpret unconditional love as allowing others to abuse them.

If you love yourself first, as God loves you, you will never even have those people in your life, much less allow them to abuse you.

Then, learn to read.

You must learn to read through a lens of love.

Read the bible and read your tarot cards as lessons in how to love better, more, and more completely.

You came here to love.

You came here to have these sensual human experiences.

You came here to have fun.

Both tarot and the bible can allow you to have a stronger relationship with God, with yourself, and with others if you read them through the lens of love.

So keep that in mind, and you have nothing to fear.