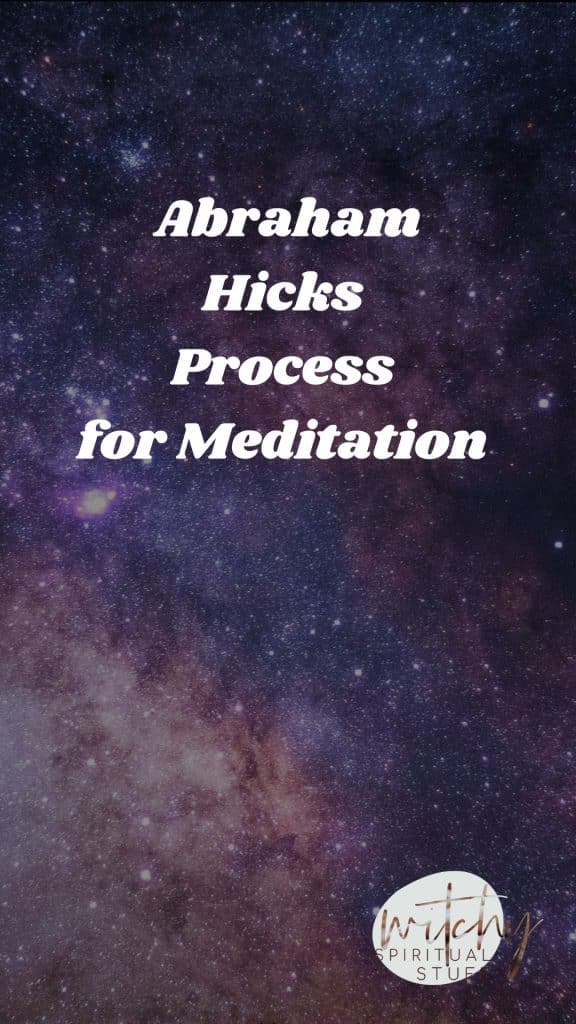 If you’ve been looking into it, the Abraham Hicks process for meditation might have the easiest approach of all. It may be because they are the literal definition of source energy, just telling it like it is, or maybe it is because humans make everything so complicated.

Or perhaps it’s a combination of both.

In any event, Abraham Hicks advice on how to meditate is short, sweet, and to the point.

Whether you’re looking for financial abundance, a closer relationship to your inner being, physical well-being, general well-being, one of the best ways to tap into the vortex of creation, or a spiritual guide, the learning the teachings of Abraham is one of the most positive things you can implement.

First, who in the world (universe?) is Abraham Hicks?

Well, the story goes as follows:

Once upon a time, back in the 1980s, a married couple named Jerry and Esther Hicks, were traveling the country teaching seminars. Jerry happened to be a huge fan of the book Think and Grow Rich, by Napoleon Hill.

This piece is critical to the story because it shows the state of mind Esther and Jerry were in when Abraham entered the picture.

You see, Think and Grow Rich is one of the formative books on the power of the mind. Hill posits that all you have to do is make your mind up about something, and you can achieve it.

In the book, he discusses many of the most successful people of his time (the book was first published in 1937), and before his time.

The Success of Think and Grow Rich

The book, and remains to this day, all the more successful because of how easy it is to ready.

Unlike with Emmet Fox and The Sermon on the Mount, or Thomas Troward and his Edinburgh Lectures on Mental Science, Hill’s book is filled with straightforward, real-life examples of finding success just on the other side of failure.

He touts confidence in oneself and belief, sheer force of will and unwavering belief in the self.

Hill even tells the story of his own son, who was born without any ears. The sides of his head were completely closed up, he had no inner and no outer ears at all.

Hill and his wife were determined that not only would their son not suffer as a result of this “handicap,” but also that this so-called disability would become a strength.

He discusses at length the power of influence, how we can influence others to believe in themselves, especially our children.

He refused to teach his son sign language, insisting that he would learn to communicate like everyone else.

For years, the boy worked hard to communicate with words, on paper, verbally, and through pantomime.

By the time he was in school, he discovered that he had an advantage in his “disability,” getting extra time from the teacher, which amplified his ability to progress through his studies.

He excelled both in school and professionally, selling papers on the street to passerby and making more money than any other kid within miles.

And after two decades of hard work and belief, Hill’s son, by now a college student, suddenly found he could hear. He had full function of both ears, quite miraculously, still with no physical inner or outer ear.

He could hear and speak like any normally functioning human.

The man went on to graduate from college with honors and spent the rest of his life teaching deaf and mute people to acquire their abilities.

Well, Jerry Hicks was so enamored of this and Hill’s other stories that he wanted to share it with others. He and his wife traveled the country, with Jerry giving seminars on the book and teaching people to use the powers of their minds.

One day, a friend recommended that Jerry and Esther meditate.

It was a relatively new concept, and, given their profession, they figured they’d give it a try.

At first, they did not know what they were doing. They merely sat, back-to-back, in silence.

Over time, however, they got better and better at quieting their minds.

Finally, one day, as Esther sat with her mind clear, she felt a jolt of energy enter her body.

She shook and jerked. It freaked her out.

She was too shaken to loosen up and let the energy fully in, so she began sitting at a typewriter or with a pen and paper and allowing the energy to communicate with her there.

Esther Hicks was in such a state of high vibration during her meditation, because she was genuinely just so carefree and joyful, that she was able to allow source energy into her body.

Source energy is the seat of all creation. It is “God.” And we are extensions of that energy in human form.

When we sit in silence, completely open, we allow that energy full access to us, and we are able to communicate openly with it.

The Birth of Abraham

Esther got so good at this process that she was able to become an open channel.

Source Energy is able to communicate with the rest of the world using Esther’s body while Esther sits patiently in a state of allowance.

If at any time Esther chooses to regain control of her body, she can. This is not a force, there is no pressure, it is a purely consensual experience.

“You can call us Abraham.” Source Energy responded.

And thus, Abraham Hicks was born.

They refer to themselves in the collective “we,” and they now travel the world with Esther (Jerry passed after a bout of cancer several years ago), helping people understand their own power and how to use it.

The Law of Attraction

The basic principle Abraham Hicks teaches those who attend conferences, read their books, travel on their cruises, or simply watch their YouTube videos, is the law of attraction.

Essentially, whatever you are, you are attracting into your life.

If you are happy, you attract more happiness.

If you are sad, you attract more sadness.

The universe responds, from a neutral place to energy with the same energy, always, without exception.

Sounds pretty simple, right? So what’s with all the teaching? What’s to be taught anyway? Just get happy!

Anyone who has ever been in a negative space knows that getting out of that space is no simple matter.

As Abraham explains, you cannot leap from one energetic vibration to a dramatically different one. You must ease yourself up the scale gradually.

Fear is the absolute bottom of the scale.

Anger is a little higher. It feels better to be angry than afraid.

Sadness is a little higher still. It feels more relaxed to be sad than to be angry.

Hope brings you into the positive.

And so on until you reach a state of joyful, abundant, unconditional love. The state of God.

“But,” you wonder. “How do you work your way up the scale? How do you get there?”

Instill a meditation practice with a breathing technique into your daily routine to access the subconscious mind and reach a higher vibrational state.

According to the Abraham Hicks process for meditation, the best thing we can do to shift our thinking is to meditate.

The process of meditation according to Abraham Hicks is very simple; you can complete guided meditation sessions in a single day.

It is how you connect and communicate with source energy, whether Abraham or some other expression of that energy.

And it does not take long. They say we should not be simply sitting in meditation all day long to lift our moods as that is not why we came here into human existence.

We came here, as extensions of Source, to have the human experience.

With each experience, we expand.

And we should always be expecting happiness, knowing, of course, that we will have negative moments that take us out of alignment with our highest selves.

But we can get right back into alignment just as quickly through meditation.

The goal of humans, according to Abraham Hicks, is to be happy.

They even have a 5-step Abraham Hicks process for meditation that outlines our road to and through happiness.

Step 1: You ask for what you want.

Step 2: Source Energy answers (at this point, what you want is in the universe waiting for you to receive it)

Step 3: You align yourself with your desire

Step 4: Maintain your alignment (you typically receive your desire in Step 3 or 4)

Step 5: Experience contrast and appreciate it

This is the cycle all humans go through, but far too many of us get stuck in step five.

So, to get out of step five, or to stay in steps three and four, staying in alignment, we meditate.

For Abraham Hicks, all that means is sitting down each day, at the start of the day, for 20 minutes, and quieting your mind.

Practice makes perfect, and the more you practice, day after day, you will feel your mood lighten, and you will even feel Source Energy move into you.

Before you know it, you are constantly receiving.