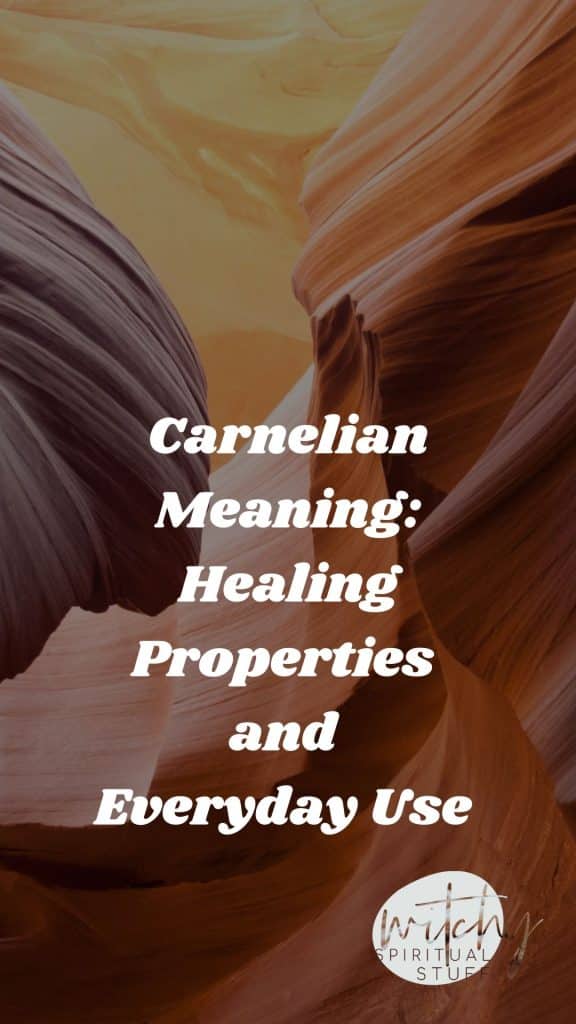 If you’re wondering about carnelian meaning, look no further. One of the greatest aspects of finding our personal power is understanding our relationships as humans to the material world from which we have sprung.

Carnelian meaning is but one example, albeit a profound one, of the way in which we as humans interact with the world around us and how so much of that world offers healing properties.

We Are Made of Starstuff

With a few variations, most scientists will agree that earth and all of life on earth was created from exploded stars.

The Big Bang theory tells us that a cosmic occurrence took place such that several starts heated up rapidly and very close together to the point of a massive explosion. The result of the that massive explosion was the formation of early earth.

Very near to that original event, another cosmic event of some sort took place that gave us our moon. The basic theory is that either another nearby plant collide with ours, or some sort of other space debris did, and that collision create the earliest form of earth and the moon as we know it.

Thus, the material on earth and the moon is mostly the same. Of course, the moon contains more of the material from whatever it was that collided with earth to create the moon in the first place. But earth will also contain that material as a result of that collision.

Think of it like when a car sideswipes another car. It leaves traces of itself on the car with which it collided.

Thus everything that has sprung from earth since is made of that same material.

In short: starts exploded, creating earth and then the moon. Life formed on earth from that material. Nothing new has impacted with earth to bring new life to the earth then, as far as we know.

We are made of starstuff.

The Beginning of Life: We Are All Connected

Once you grasp that theory, you can carry it further to the interconnected nature of all of life and all material on earth.

The very earth, the soil, the rocks and stones and crystals, then the plants and animals, and then, finally, humans, all have the same essential properties.

Every single rock on earth has the same elements inside of it that we humans also have inside of us.

We need the earth to function, and the earth needs us to be its shepherds.

Carnelian Meaning and Its Healing Properties

Carnelian is a semi-precious gemstone that comes from the chalcedony family, which is a crystal made up of both quartz and moganite, the difference being that quartz is trigonal, meaning it has three side, and moganite is rectangular.

Chalcedony is mentioned in the Book of Revelations in the Bible, and goes back at least to ancient Babylon as a healing stone with great power.  Carnelian meaning is powerful.

Carnelian has been used as jewelry, as art, and to make tools and equipment for thousands of years by a wide variety of human civilizations.

It is a softer, lighter stone with shades ranging from orange to reddish brown, and often including splinters of other shades of color within.

Its color comes from the iron oxide from which it is made.

Traditionally, carnelian was known as “the sunset stone” by the Ancient Egyptians, and the name, and its power, has stuck.

Like a great, fiery sunset, the carnelian stone in all its forms is best knows as a soul-stirring stone, there to cleanse away old energy from the day and prepare you for something new, and usually big.

Red carnelian is seen as more masculine and relating to the solar plexus chakra, worn by men to give them courage in an upcoming battle.

Carnelian is a lower chakra stone, relating clearly to the second and third chakras.

The root chakra, the first chakra, located at the base of the spine, between the legs, or at the soles of the feet, is your community chakra. It is the energetic location of your connection to all of life on earth, and particularly to your tribe.

At the root, you must contend with the shadow self, your purpose in terms of service to others, and your relationships with your various communities.

As you rise from the root, however, your energy becomes more individualized.

The second chakra, the sacral chakra, is located in the womb space of the woman, and in the same space for men, though men obviously have no wombs.

It is a deeply and divinely feminine energy in this chakra, and it is critical to recognize that we all have feminine and masculine energies.

Remember that outside of the human experience, in our spirit forms, we have no gender or sex.

When we speak of the feminine, we are speaking directly to qualities of chaos, nurturing, creation, nature, and passion.

When we speak of masculine, we are speaking of order, conservation, structure, and protection.

Neither can exist without the other, and when we humans do not have both our masculine and and feminine energies aligned and balanced, we find ourselves in toxic spaces.

A blocked sacral chakra can result in fertility issues, lower back problems, and urinary tract issues, among other things.

Thus, anyone not in touch with their sacral chakra, their creative space, will do well to perform a carnelian cleansing ritual.

The solar plexus chakra is intensely masculine. It is the space for protection, for instinct, for decision making, and for carrying out the plans made in the second chakra creative space.

The two, when in balance, function well together.

When your solar plexus chakra is out of balance, or blocked, you will deal with stomach problems, digestion problems, and even nervous system issues as your solar plexus is a ganglion of nerves that extends outward like the sun to every part of your body.

While the feminine creates, the masculine provides order for the creation.

Carnelian gemstones, especially of the pale orange variety, ward off negative energy, welcome good luck, bring high energy and crystal healing to your physical body all while imbuing you with positive energy and fiery energy. It is a stone of protection, a stone of courage, and a stabilizing stone meant for your overall health, a good blood supply, and inner strength. It is an ancient stone that brings the bold energy and healing powers of ancient warriors

Carnelian stones remind you of your power, your energy, and your vitality.

Working with a carnelian stone will help you bring you back to your center, detox any blocks you have in the sacral and solar plexus chakra, and prepare you to create and execute your plans.

It will do well to remember that these stones in and of themselves have no power. They are, if you will, just rocks.

It is we humans who have all the power, and we imbue them with the power of our beliefs. With a stone like the carnelian crystal, we have thousands of years of belief systems, from ancient times, that we can draw on.

While it is true that we create our own reality, that reality is tremendously powerful when it is created by millions of people over the course of thousands of years.

That is the power of the healing properties of a carnelian stone.

First, cleanse your carnelian stone under a full moon, which is simply a matter of sitting your crystal in a clear glass bowl of clean water, preferably from a natural running water source like a spring, a creek, or a river.

Leave the crystal in the water overnight on a full moon. The next morning, you can consider it cleansed.

As your crystal is being cleansed, on the night of the full moon, sit with whatever is blocking you, and write down a prayer of sorts.

You will write down your troubles first. Then write down how grateful you are that your body knows what to do to heal itself. That spirit is always with you, providing guidance, and that you appreciate your path being cleared, even if you cannot see it yet.

Next, write down your expected outcome from clearing your chakra. What you know you will manifest as a result, plans and actions.

Before the full moon sets and the sun rises, so very early in the morning, sit in meditation with your carnelian crystal and meditate on what it is you need to clear up.

Remember, if you are working on your second chakra, your stone should be an orange carnelian. If it is your third chakra that needs help, draw on a red, or reddish brown carnelian.

Sit for 20 minutes and clear your mind.

You have already sent out your prayer and written it down.

Now you are sitting for guidance.

Once your 20 minutes are up, rise, honor the four corners of the earth and its elements.

Then burn your written prayer, putting all of your faith in the Universe to provide clarity and opportunity.