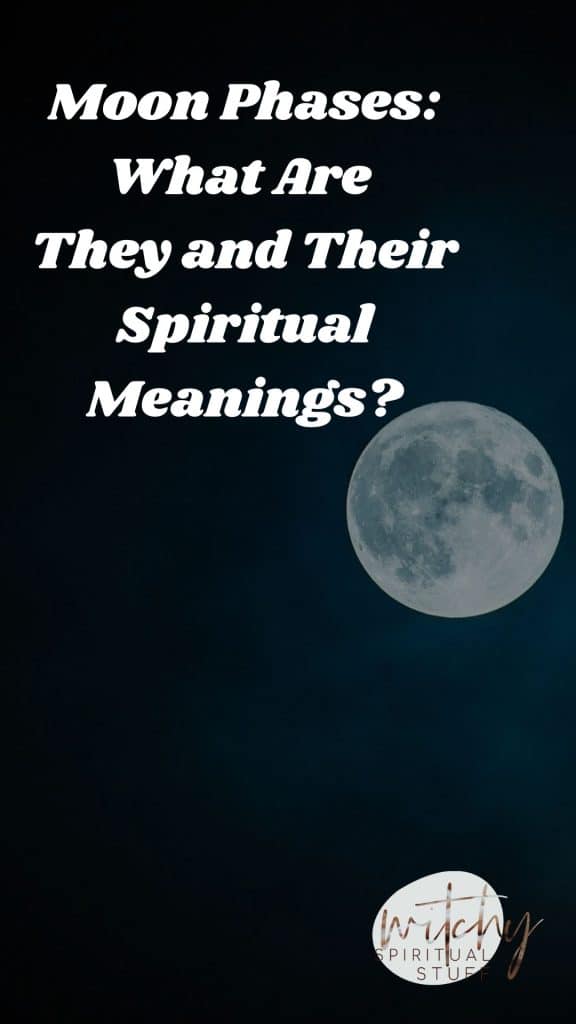 The moon is one of the most powerful physical, energetic forces in our lives. You can argue against planetary alignments and positions and even debate the topic of numerology, but you cannot argue against the forces and phases of the moon and how they affect humans.

And the moon controls the water on our planet.

Whether or not you realize the effect of the moon on you, it is affecting you. The real questions then, are what are the moon phases, what do they mean to your spirituality, how does all this affect you, and how can you best work with the moon?

Lots of questions, I know.

The moon is connected by gravity to the earth; it belongs to the earth, and it is made of mostly the same material as the earth.

The moon was formed shortly after the big bang that created the earth. It is widely accepted that a giant rock from the planet mars collided with the then very new earth, which led to a huge explosion.

From that explosion, the earth and its new moon emerged, with materials and chemical composition mixing and combining, making the two celestial bodies almost indistinguishable in their makeup.

The two then began to cooperate and function in synchronicity with each other.

Early civilizations understood this, and therefore created a 13 “month” “year.”

A month followed the lunar cycle, with 28 days. And a year followed the earth’s rotation around the sun, with 365 days.

The math works out almost perfectly, with less than two hours left over at the end of each year.

What is fascinating is that this calendar aligns perfectly with nature. You can see the 13 months and the 28 days mapped out on the shell of a turtle.

The moon controls the tides in earth’s oceans as well. It has a gravitational pull the generates something called “tidal force.”

Tidal force causes both earth and its water to bulge out on the side closest to the moon and the side farthest from the moon, which is what makes earth not a perfect circle but instead a sphere.

Without the powerful influence of the moon, all of life would be affected, physically. Literally.

Crabs and shrimp that rely on the light of the moon to trigger various life phases would die off. Turtles and other sea creatures would no longer have a tide to work with for reproduction.

Even human fishing would be far more difficult as much of the sea life we rely on would be dead or begin to function differently without high and low tides.

The Phases of the Moon

When we see the moon, it is by the sun’s light. If there were no light from the sun, we would never see the moon. Our perception of the moon is directly related to where the moon is located in relation to both the earth and the sun.

The four phases of the moon are stopping points along the 28-day cycle: new moon, waxing quarter moon, full moon, and waning quarter moon. In between all of these are various types of crescent moons, which are when the moon appears as the classic sliver figure.

Each lunar phase offers its own light and energy.

The dark side of the moon.

A new moon is the beginning stage of the moon’s orbit, day 1, and it “appears,” or rather does not appear, when it is in direct opposition to the sun across the face of the earth.

When the sun and the moon are on opposite sides of the earth, the sun’s light cannot shine on the moon, so we do not see it in the sky. With a telescope, you can sometimes see a faint outline of the dark moon in the sky.

A waxing crescent, or quarter moon appears in the sky as a half of a moon that is heading toward the full moon. Remember that we are only ever seeing half of the moon, as we see it from a one-dimensional perspective, just the face. So technically, this “half-moon” is a quarter moon.

The full moon appears at the midway mark between day 1 and day 28, so day 14. We see the moon at its fullest from our perspective, a big round ball in the sky. We can see the moon in this light because the sun is in a position related to the earth that allows it to shine fully on the moon with no obstruction.

Waning is the word we use for the kind of fading away we imagine as the moon heads toward the end of its cycle, the third quarter moon, back to new moon status. It appears much like the waxing quarter moon, as a half of the face of the moon in the sky.

Women and the Moon Phases

The moon’s phases, along the moon’s orbit, as the moon changes, effect women in different ways. The lunar calendar aligns with our own.

In witchcraft and many spiritual practices, we work with the moon as a way of stepping into the flow of universal energies.

Women especially are directly tied to the moon, energetically and physically.

For millennia, women’s menstrual cycles functioned alongside the phases of the moon. Indeed, the word menstruation comes from the Latin and Greek word for moon, “mene.”

And if you are a woman in sync with her cycles, not on any kind of hormone supplement or blocker, and not on birth control, you can feel this energetically.

We tend to be more tired during menstruation, during the new moon phase and leading up to it, and more energized during ovulation, when our bodies are preparing to get pregnant if the seed is presented in time.

This is called the white moon cycle.

Some women are synced up to the moon in reverse, which is called a red moon cycle.

The pink moon is when a woman menstruates during the waxing moon.

Purple moon is when a woman menstruates during the waning moon.

Of course, you don’t have to be a woman to be in touch with your divine feminine and work with the moon, which is largely thought to be a feminine energy.

When it comes to the phases of the moon and spirituality, it is all about where we stand in our creative space. Remember, the feminine is the creator; she is soft and receptive, open to channeling the energy of the divine and communicating messages into all forms of creation, art and otherwise.

The new moon is the beginning of a creative cycle. This is the time to plan and prepare, lay out your steps for creation, outline your work, and sit in meditation on how you may help bring this creation to life.

It can be anything from a self-development process to a work project to a hobby to a domestic venture to a long journey you are taking.

Once you leave your restful, thoughtful, curious energy behind in the new moon phase, you step into the ramping up and working phase. You put all your pieces into place.

These few days are when you should lay all the foundation for a wonderful project to unfold.

The full moon is peak energy, you should be working your hardest on your creation now and really seeing it take shape.

From thought, we get form. New moon was your thought. Full moon is form. You are not done quite yet, but you can take a minute to reflect on how far you’ve come. You are at the midway point of your cycle now, so you should be able to recognize what went wrong, what went wrong, and how to adapt and shift accordingly for success.

Finally, you enter the last few days of your project. Things start to slow down as you put the last pieces into place. You can relax, breathe easily, and see the finish line.

By the end of the waning quarter moon, once the moon goes dark again, you should be able to take the next few days to rest and look back on a job well done.

Remember, if you are a red moon cycle, you can reverse this so that your day 1 is the full moon. Witchcraft and spirituality are all about accepting what is, not fighting it, and working with the energy you’ve got.