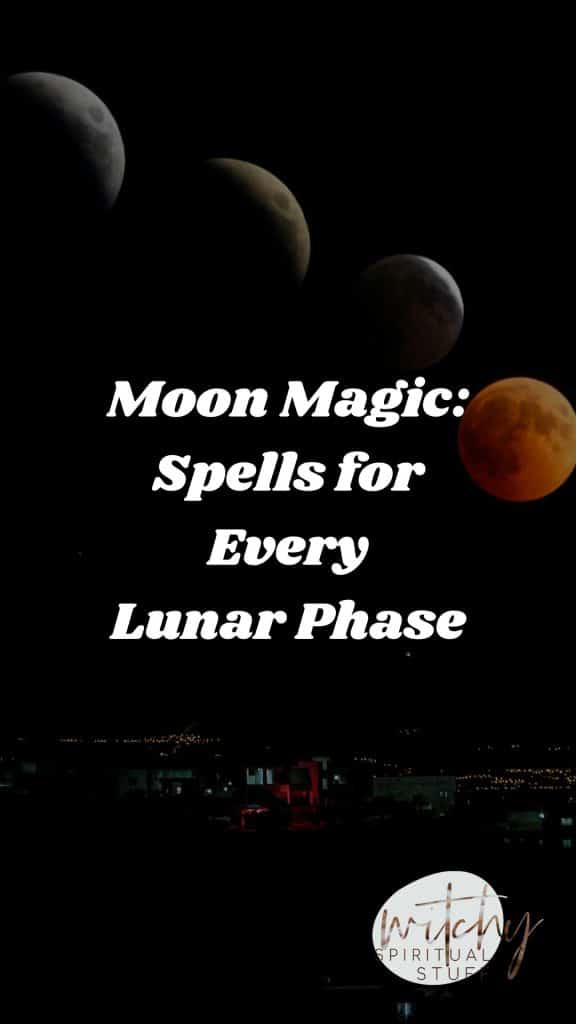 Moon magic is the best kind of magic. At least, in my opinion.

Moon magic was the first type of magic I practiced, aside of course from herb and food magic which I have been integrating into my practice since before I even knew I had a practice – before I came out as a witch.

A really big part of moon magic and learning how to cast spells or prepare prayers for every lunar phase is first to click into the very real certainty that you are made of the same stuff the earth and moon are made of, and that the same universe that created the moon created you, and that you are that universe.

So let’s unpack all that.

You Are the Universe

For all my fellow science nerds out there, Deepak Chopra got together with a brilliant quantum physicist to write a book called You Are the Universe, in which they outline with startlingly clear evidence that our consciousness is linked inextricably to the consciousness that has been present since the very beginning of time, indeed since before there was such a thing as time.

Combined with the highly logical spiritual teachings of Abraham Hicks, it is easy to see how it all unfolds, at the basics.

The act of creation is simple and straightforward for the Universe as it is for humans.

Think the thought, speak the words, and allow the creation to come to life.

And so it was.

It began with planets and suns, moons and water, plants and animals.

We are on the cutting edge of creation, and we alone, at least on this planet, embody that same consciousness as the Universe, albeit in limited form as we are locked into these human forms for now.

A basic principle of the way the Universe functions as far as creation goes is the law of attraction.

The law of attraction is unwavering and rigid in its performance, which is a really good thing for us because we can always rely on it to do its job.

The law of attraction states that we attract what we are.

Not what we want.

Not what we think, necessarily, unless we think it constantly and for a long time.

But what we are.

We have to know it deep in our bones to attract it.

That’s why when you hear people deny the law of attraction they will typically ridicule it using that reasoning: I wanted it and I didn’t get it.

Well wanting is not enough.

You have to know you will get it.

In fact, even saying that to ask is necessary is kind of a moot point.

You are asking when you know you will get it.

Then, you have to get out of the way, meaning stop resisting, release doubt, fear, anger, hurt, and all of the negative feelings that will block your receptive mode.

So, know it is yours for the taking, and allow it to come to you.

What does all of this have to do with moon prayers?

Well, you need to understand first your connection to the moon and second the point of prayers or spells.

The Moon Magic Cycles and Their Prayers

You and the moon exist in the same cyclical nature. The only difference is that the moon remains faithful to its cycle, and you, like most of us, probably do not.

Before you start praying to the moon and expecting an answer, step into flow with the moon.

The four moon phases and how we can step into flow with them are as follows:

The new moon is when the moon appears dark in the sky as the sunlight does not shine on it at all, being on the direct opposite side of the earth from the moon.

The new moon, also called the dark moon, is a time for stillness and thoughtfulness. It is a time for rest and relaxation. A time to look back on what we have accomplished.

And for many women in natural rhythms with the moon, a time for menstruation.

If this resonates with you, take the time, at least a couple of days during this phase, or whenever your menstrual cycle clicks in with the lunar phase, and rest.

Chill out, indulge in rich foods, have great sex, watch well-made films, read good books, swing in your hammock, and embrace the divine feminine in you who is receptive and nourishing.

Moon magic spell: I am worthy of rest. I am worthy of love. I love myself. I will just be here with the four elements of the Universe and let this present moment exist within me.

The waxing moon is when you come out of your cocoon and start planning your short term plans for the month and welcoming new beginnings. The moon appears in various stages of crescent and “half” as it “waxes” toward fullness.

You should be working hard toward your goals and checking in with yourself along the way to right any wrong steps you have taken.

And when I say working hard, remember, you should be working with passion, not to exhaustion.

Hustle culture be damned. We are embracing our divine feminine who howls at the moon. And now is the perfect time.

Moon magic spell: I work with love in my heart, knowing that all I ever desire is coming to me. It is my work to follow my divine intuition and go through the doors the Universe opens for me. I work from a place of inspiration.

The full moon circle appears when the light of the sun is shining directly upon it in the night sky.

This is the full moon ritual that takes place as your goals are clearly coming to fruition, and you should celebrate your successes, checking their alignment with your larger goals.

This is also a woman’s most fertile time if she is in sync with a new moon menstrual cycle, so if you are hoping to bring new life into this world, in any form, this is your ideal time to double down and let your passions light a fire in you.

Moon magic prayer: It is with great gratitude that I sit here under the moon and reflect on all I have, all I have done, all I am, and all I will do. I am capable of astounding things, and I appreciate being surprised and delighted by the Universe.

The waning moon often appears no different from a waxing crescent moon, taking on various stages of working its way down to the next new moon.

This is a good time to will bring all of your small goals to a close, closing doors that are no longer for you, burning what no longer serves you, and allowing harsh negative thoughts to wash away as you prepare for the coming new moon and a fresh start.

Stand in a sacred space for this moon magic spell: I am almost done with this moon cycle. I am almost complete. I have the energy from the Universe to keep going. I will not give up. I will draw on my inner strength to move forward and allow the Universe to guide me home to the finality of my goals this cycle.

Moon Magic and Spells for the Moon Phases

Thus, your moon magic lies in your ability to recognize the moon as an essential part of your life and a reminder to live cyclically.

With each moon phase, you can stand under the moon before bed at night and either call up a prayer or cast a spell.

Remember, spellcasting is merely speaking your power into words, which is a critical step toward manifesting magic. You must speak them out loud.

Some people prefer to call it praying, but it is the same thing at its most essential point: you are calling out to God, the Universe, recognizing its innate and infinite power to bring any idea to reality, and you are recognizing your own worth in receiving the material manifestation of that idea, your spell, your prayer.

This direction is the reason so many people do not see their prayers come to fruition: they ask from a place of lack.

They think they are manifesting money, but really they are focusing on how little money they have.

You must see it, feel it, live it as if it is already in existence.

A further note is to recognize that the Universe has a much, much bigger imagination than you do.

So allow yourself to be surprised and delighted by the way what you seek comes to you.

When you attempt to control the steps and the process, you are not trusting the Universe to manifest, you are still doubting.

Finally, you cannot cast spells or pray for someone else to change.

I mean, sure, technically, you can stand under the moon and cast the spell, but it will not work.

Each one of us has our own inner guide, our own path, and our own will. The second you try to subsume someone else’s will, you are out of alignment with the Universe and you cannot manifest from that place.

Think about it – the Universe does not try to subvert our will to its will, why on earth would you think you can replace another’s will with your own?

The best you can do is see that person open, loving, whole, and in alignment with their own inner guide, their own cosmic self. And you can, of course, model.

In the end, allow the energy of the moon to help you start new projects, set new moon intentions, prepare moon water, open you up to positive change and new ideas on a deeper level than ever.

Harnessing the moon’s energy will help you dispel negative energy, call in your higher power and your spirit guides, and see the magic of the moon as a great sign and a beautiful thing always working for you.

So use this ancient tradition to find a quiet space and integrate moon prayers into your self care routine.