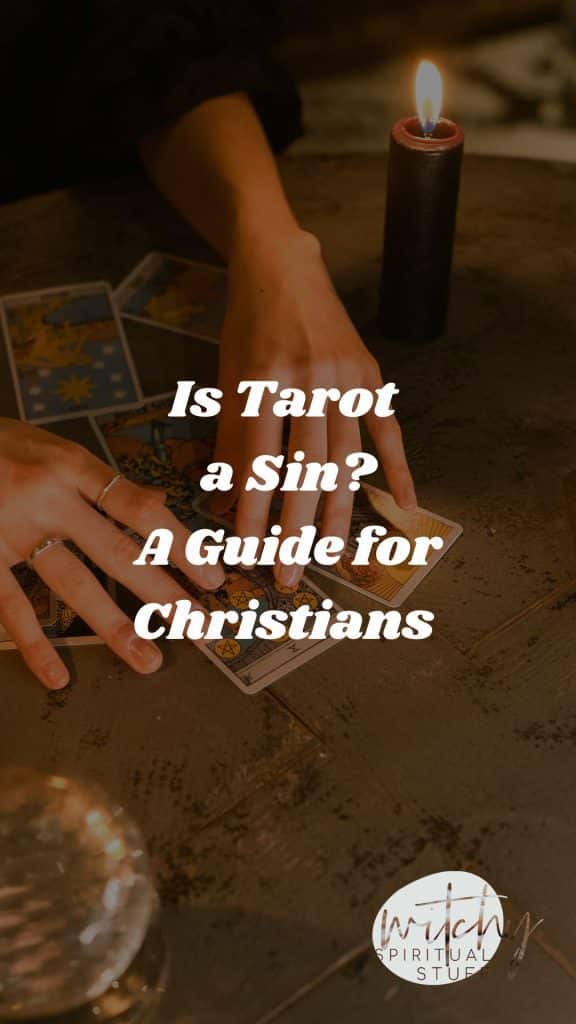 Is tarot a sin?

Alright, buckle up, we’re getting into heavy territory here.

Is Tarot a sin?

Is there more to the story?

So let’s talk about it.

“Humans. We love you so much.” Every time I hear Abraham Hicks say this, I laugh gently to myself.

We really are a kooky bunch, aren’t we?

In the beginning, we were just a bunch of wild apes trying to survive.

We moved with the earth, lived by the seasons, and were preternaturally inclined to cooperate with the earth and Universal forces.

Then we settled down and things got crazy.

We began thinking of land as property.

Territory to be defended.

We started thinking of resources as scarce.

And of course we could not take responsibility for our all too human flaws, so we made gods in our image and blamed them.

This god made me cheat and lie.

That god made me steal.

Most civilization created gods for each joy and each pain, for each season and each element.

The Hebrews were the once civilization who had a single God, oh and a devil.

The good was attributed to God.

The bad was blamed on the devil.

And God, who created the devil, punished us for falling prey to that great persuader.

Along the way, we had some prophets, some mystics, those rare individuals, oddly all men, who could see through the manipulations and weaknesses of men and offer the true meaning of life.

And it was always the same.

In one form or another, all the wisest and most respected spiritual leaders on earth have told us the same basic thing.

From Lao Tzu to Buddha to Vyasa to Jesus.

Take Jesus at His Word

Yes, Jesus came along, a Jew born in the Roman Empire, and he spread the word of love.

He owned his religious as a Jew, he loved the God of Abraham, and he told his followers that he had an update of sorts to the Torah, the bible of the Hebrews.

Take responsibility for the hate in your heart and wash it away with love.

Turn the other cheek.

Love God with your whole soul.

Let your light shine before men.

You have eternal life.

Let not your heart be troubled, neither let it be afraid.

All these things you will do and far greater.

Then, the Romans and the Jews conspired to have him murdered, tried and executed, crucified as a traitor to his empire.

But word was already out.

His disciples went out and continued to preach his teachings of love.

Mary Magdalene, arguably his closest disciple, the one to whom he chose to reveal himself when he rose from the dead, was among those who spread his good words, as were his mother and his aunts.

As were many, many women he inspired.

The Roman Empire, after trying with all their might to crush this growing spirituality, finally caved and adopted a newfound religion into their midst.

Christianity, they would call it.

They combined selected works of Jesus’ followers, no women of course, and the Torah into one book and called it the Holy Bible.

This book taught some of what Jesus preached, and a lot of fear and oppression.

Then, of course, the people were forbidden to read, so the bible was read to them from the church leaders, priests and bishops.

And as we all know, those who control the flow of information also tend to manipulate.

For how can you manage a group of people who are educated and can think for themselves?

So the word “sin” went from the Greek meaning, “to miss the mark” to a horrible evil that would have you sent to a fiery hell.

In reality, hell is never really described as a fiery place you go to after death in the Bible.

It is the location for those who reject God.

And when you translate God as Love, you can see how, metaphorically, those who reject love are in a hell of their own making.

But that’s not what they teach you.

They teach you that every time you “sin,” you are paving your path to some eternal damnation.

And if you don’t repent your sins and convert to Christianity, you’re going straight to hell.

The truth is that Jesus never taught any of that.

To sin merely means you are off the path of enlightenment, the path of love, of unconditional love that God, or Source Energy, has for us all.

It is quite easy to get back on.

Simply recognize the error of your ways, and get back on the path.

It really is that simple.

Even in the Bible.

The stories in the book are metaphorical. They are guides to living a good and wholesome life.

The fear of hell and the terror of sin is all manmade and easily discarded.

Is Tarot a Sin?

No. Of course Tarot is not a sin.

Tarot cards were designed by an artist who went by the name of Etteilla in the late 1700s. He hand painted a 78-card deck that was an offshoot of the original 52 card playing deck for wealthy families.

Over time, those cards were used not for playing games but to tell fortunes and read life stories and paths.

They were, in short, used as divination tools.

Ways to communicate with God.

After all, all gods are one god.

There are no multiple gods, unless you are talking about each one of us.

Each human, after all, is spirit, a drop of God, in human form.

And what is a drop of God if not God?

Then, you must ask yourself if it is even possible for a god to be evil.

God is only good.

Source Energy is a creator.

Creation is a positive energy.

Evil is another of those manmade realities.

Remember that whole greed, power, fear thing we started with after we settled?

Yea, we humans do that stuff.

In a Universe of abundance, there is no reason for God to be greedy, power hungry, angry, or fearful.

In fact, humans are born with only two basic emotions by design – love and fear.

Every other emotion stems from those two.

Of course, as humans, we need both.

We should be afraid the hot stove.

We should be afraid of dark alleys at midnight.

We should be afraid of the mother bear protecting her cubs.

In this human reality, we need contrast.

We need fear to keep us alive in our human bodies.

And we need love to give birth to God in this world.

We need darkness to see light.

We need pain to appreciate joy.

And we need to “sin” to stay on the path of enlightenment.

Not because we are afraid of some eternal damnation, but because it does not feel good to be off the path.

So, technically, yes, when we sin, we go to hell.

We feel pain, we are sad, we get angry, and so on.

But we hold the keys to get right back out.

Tarot is just a neutral deck of playing cards.

We are not speaking to demons and ghosts when we pull tarot.

We are seeking God.

And who says that God can be found less in a Tarot deck than in a church?

I find God in the forest most often, to be quite honest.

So read tarot if you want to.

Anything that brings you closer to the God that is Source Energy, that is love, that is the original creator, that is us, is a blessing.

Any way you can find to facilitate a deeply spiritual practice, do that.

Anyone who tells you different is in a hell of their own making, and as Jesus said, it is our job to simply shine the light.

We do not fight fire with fire but with water.

We are peace warriors, love warriors, on a mission to just love ourselves and each other more intensely and with fewer and fewer conditions.

Tarot cards, by design, are meant to have fun with.

And as they evolved, they were woven with still more spirituality and greater opportunity to connect to the divine.

Take that as you will, use it in ways that speak to you, that resonate with you, and don’t let anyone else tell you what your path should look like.

After all, no one knows you and your path better than you.