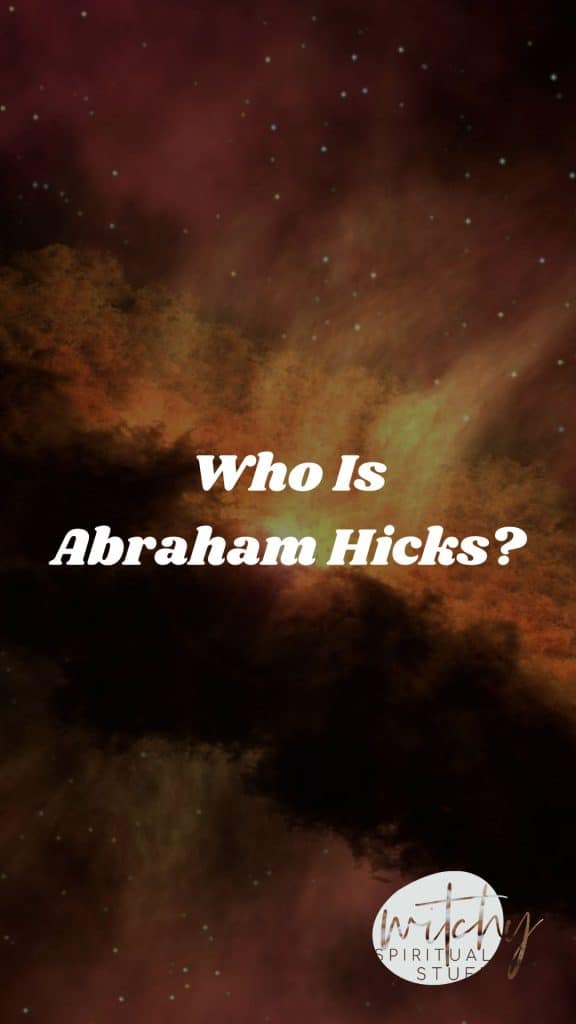 You’ve probably heard of Abraham Hicks. Maybe a friend has quoted them, or you came across a podcast or YouTube video where someone is either talking about them or using an old sound snippet from them.

And now you’re wondering, just who the heck Abraham Hicks is and what do they even do?

In short, Abraham Hicks is a collective consciousness that is channeled through a medium woman by the name of Esther Hicks.

Abraham goes by “they” as they are not a gender or sex for one and are more than a single entity for another.

They refer to themselves most often as infinite wisdom.

But yes, there is so much more to it all than that.

I first discovered Abraham after the birth of my second child.

My mother was in town staying with us, and she had taken over my office just off my kitchen.

She began playing these recordings as I sat on the floor playing with my five-year-old or nursing my infant, or both.

And everything I heard out of the corner of my ear made such good sense.

A little bit of background.

Perhaps I was most receptive to Abraham because my mother raised me under the Science of the Mind belief system, which, if you know anything about the law of attraction, is the very law of attraction.

The Science of the Mind

The Science of the Mind church was founded by a man named Ernest Holmes, who taught his followers that we had all the power inside of us to live the lives of our dreams.

We have a direct line of communication with God, and God loves us and is always listening.

All we have to do is open up that line of communication.

He pointed out the metaphors and connections in the Bible, the Koran, the Torah, in Buddhism, in ancient Chinese and Indian spirituality.

He brought it all together with philosophy throughout history, science, and mysticism.

And he made it all make sense.

My mom found the church after a nasty divorce and a forced leap into single motherhood. It spoke to her in an empowering and freeing way.

I was 6 and deeply impressionable, so it took really well when she told me everything was mental. That I could do or be anything I wanted to be.

Unfortunately, it did not take so well for her.

She lapsed and returned over the years, struggling to stay on track, but allowing the world and all of its troubles to get her off track over and over.

Then, when she was just 53, my mother got cancer.

All four of her children were grown by now, with me being the oldest, and we kicked all of our training into gear.

We discovered this newly released video on DVD called The Secret, by Rhonda Byrnes.

The video is a series of interviews of the most deeply spiritual teachers in the science of the mind way of thinking.

They all shared this “secret” that no one seems to tell us: that you have the power to manifest anything you want in your life.

You just have to believe.

The Secret became a global phenomenon. If you had not heard about it at the time, you must have been living under a rock.

But, like most trends, it withered away and left the public conversation.

Still, it was so reminiscent of The Science of the Mind that it was hard for me to ignore.

My mother watched the video on repeat, and while she had the surgery and the chemotherapy, she also prescribed herself a “year of laughter.”

She watched only funny movies and standup comedies and avoided all negativity in her life and in the real world.

Her awful narcissistic husband even took a year off of tormenting her and waited on her hand and foot.

Lo and Behold, my mother cured herself.

And 12 years later, she is still with us, giving my kids too much sugar and driving me crazy in all the best ways.

So it went that she sat there at my desk listening to these YouTube videos while I played with my kids.

But something was different.

I began listening to the videos on my own.

Then I booked my mom and myself two tickets to go see Abraham Hicks while they were in town.

And over several months of listening, I figured it out.

We are the gods we have been waiting for.

Yes. This was the critical piece that no one else was talking about.

This was the real secret.

In fact, it turns out, Abraham Hicks had been the original source material for The Secret, but they ended up getting cut from the programming because Rhonda did not think the people were ready to hear that crucial piece.

She wanted to, and eventually did, leave out the fact that we are the gods.

Abraham, unlike any other teacher, explains it simply and straightforwardly.

You Are the Universe

Abraham Hicks, through Esther, tells us that before we came into these human bodies, we were one with Source Energy, or God if you will.

While in that spirit form, we set intentions for our next human life.

Those intentions then determined all of our human reality: our birthplace, our birth parents, our name, birth date, the color of our skin, the sex we were born into, and so on.

You see, from a perspective of Source Energy, we knew it all. We could see it all.

We could envision every possible outcome and every potentiality.

The purpose of the Universe, Abraham says, is to expand.

It is a neutral energy when it comes to how it all plays out during our human experiences because everything leads to expansion.

Negative experiences allow us to learn. Sadness leads us to want happiness.

Darkness allows us to find light.

It is all expansion.

And we, in our spirit forms, wanted to contribute to that expansion, and to feel things.

Realize that in spirit form, we feel nothing.

We are simply everywhere all the time. We simply are.

We come here to feel it all.

And of course, we know we will be always reaching for joy because that is human nature.

And human nature was designed by Source Energy.

Everything we do, we do because we think it will make us feel better.

Abraham Hicks brings it all together.

They show us how the words of our great teachers throughout history got twisted for the purposes of man, how love is always the answer, and how all negative thoughts and feelings, all negative energy, is purely a human creation.

We need negativity only to show us the “bumps on the highway as we veer off path.”

We can use that contrast to get right back on the road.

Sadly, most of us fly over the bumps, way off the road, and stay out in the wilderness of pain and suffering, determined that someone else put us there, that we are victims, and that nothing can be done about it but for external circumstances to change.

Abraham Hicks tells us nothing could be further from the truth.

We have all the power.

We are in constant contact with the Universe, with Source Energy, with God, and we can allow abundance, joy, and love into our lives at any time.

We don’t have to create it.

We simply have to allow it.

When we do that, if we can bring ourselves to do that, we connect fully to our higher consciousness and we are guided through a life of love and joy.

Always in the light.

Sure, veering off occasionally into the bumps in the road, but using those bumps to get us back on track.

This is the life we are meant to lead.

But, you know, free will and all.

I’m a Believer of Abraham Hicks

Now, you may be wondering why I believe.

I am a lover of science and logic, after all.

Of evidence and empiricism.

Sure, they sell books, and they hold conferences around the world and even on cruises.

But they also give everything away for free.

They do not call you to church.

They do not ask for tithing.

They do not tell you to hurt anyone or yourself.

They do not judge or shame.

They do not require initiation or absolute commitment to them.

They just talk to people and show them how powerful they are.

And they say, you can get everything, all of their many words and conferences and information for free any time on YouTube or podcasts.

You already have everything you need.