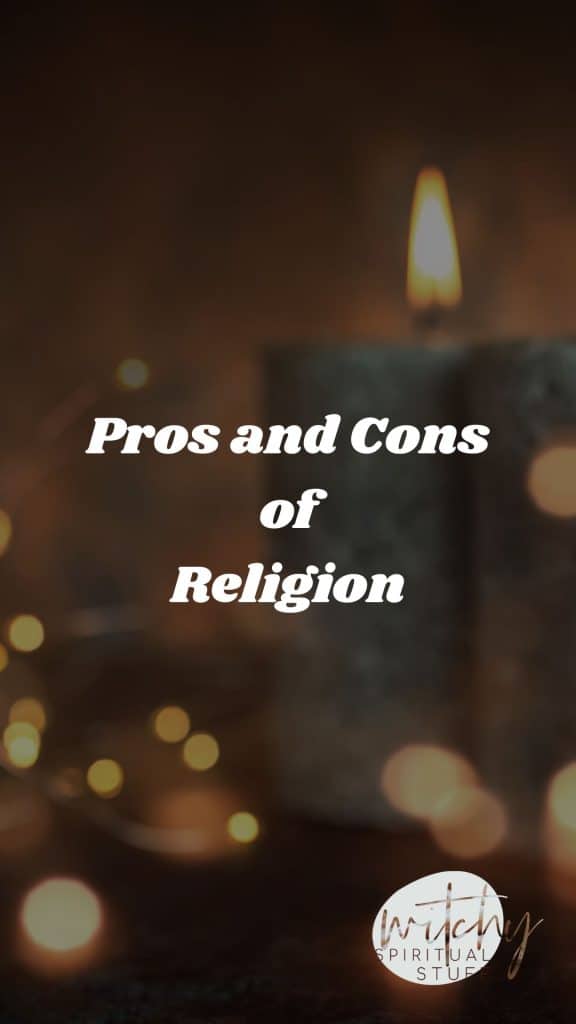 Many people wonder about the pros and cons of religion, so I figured I would list both sides to kind of clarify the different points and why each has its merits.

Several years ago, when I was pregnant with my first child, my husband and I began discussing various aspects of how we wanted to be as parents.

Did we want to speak English or Spanish at home? My husband is from Mexico, and I am a classic California white girl from the city, but we both spoke fluent English and Spanish.

Ultimately, I read a compelling argument for how the native language of the mother is the language of her emotion, which cannot be expressed fully in a foreign language. So, we chose English.

Did we want to homeschool our kids or send them to public school or private school?

As a long time educator but also someone who suffered miserably in public school, this one was tough for me. Hubby also got very little from his education in Mexico.

We eventually decided to homeschool, and really more like “unschool,” but, interestingly enough, this is the same discussion that brought up religion.

My husband was raised Catholic, and I was raised spiritual not religious. I had been to church a few times with various family members, but it never stuck, and my mother was deeply spiritual in a 1960s hippie kind of way.

And there was this gorgeous Catholic church just up the hill from us in our very urban metropolitan neighborhood that happened to have an elementary school.

I had also tutored many kids for many years from local Catholic high schools in the bustling San Francisco Bay Area, and I’ll be honest with you, these kids as a group were not only some of the smartest but also some of the kindest and most mature kids I had ever met.

And I have met a lot of kids in my line of work.

It was then that I thought, “well, do we want to become Catholic?”

And hubby and I sat down and went through all the pros and cons.

In the end, obviously, we chose not to convert, for the reasons you’ll see listed here. But in my explorations and studies of the pros and cons of religion, all the major religions, their structures, and their texts, I only became more deeply spiritual.

There is great beauty in religion, and there is also great pain.

I chose to simply become an admirer from a far, picking and choosing what I would apply to my own life and my role as a parent.

As a result, I identify as spiritual not religious, hence the witchy spiritual website, and for anyone else who finds themselves on the fence, I have written down the battle I laid out for myself when making this decision.

There is a reason religion is so deeply entrenched in human society.

Humans love stories. We need to make meaning from what we see and experience, and we need to be able to draw maps to where we want to go, with purpose and direction.

Religion helps us make sense of this, as Jordan Peterson explains in his book, Maps of Meaning.

So, what is the real value in religion?

Perhaps the primary attraction of religion for me has always been community. There are still times when I find myself envious of friends who are Catholic or Muslim.

They have community centers to go to, church on Sunday morning, celebrations and festivals to attend.

The church, in most religions, is very inclusive with its members. They pull you in, look after you, rally around you, and support you.

It is like having a large extended family under God.

And to the community feel the fact that, in most religions, community service is encouraged, and you have an extra bonus.

The Catholic church in particular is famous for its work in the community helping drug addicts, the homeless, unwed mothers, you name it.

I loved that so many of my students had service as a requirement for graduation from high school.

That, to me, is much more important than knowing every element on the chemical table.

Religious scripture also holds some of the greatest wisdom in the world.

We know this to be true because it has lasted for thousands of years.

The bible in its current form has held strong with very little editing for almost 2,000 years.

The Torah has been around for another 1,000 years beyond that.

The Quran has been around for more than 1,000 years.

Buddhist literature has been around for 1500 years.

And, by all accounts, all of these great leaders and teachers learned from each other.

Their wisdom stands today as a testament to how people are brought together in faith and love.

Each of the great religions preaches tolerance, love, faith, good works, and service in ways that compel the reader to belong.

There is something about ritual that gives meaning to life.

And much of our power as humans lies in our ability to be consistent.

To rise with the sun, meditate, exercise, eat well, pray, care for our loved ones, do work we love, eat dinner with our family, and go to bed as darkness falls.

Routine and ritual create order out of chaos, and without order, we are utterly lost.

Now, having sung the praises of religion, there is obviously a reason I am not religious, many reasons, in fact.

One of the greatest problems with religion I have is its exclusionary nature.

Despite the fact that most, if not all, of the prophets insisted on tolerance, on live and let live, and on loving thy neighbor, humans are by our very nature risk averse and fearful of the unknown.

And if we do not have it drummed into us to remain open and interested, curious and compassionate, we are likely to become xenophobic, terrified of foreigners.

And foreigners can be anyone unlike us.

Sure, there is good reason for the fear of the unknown.

And yes, some of those explorers have used religion as their compulsion.

At the same time, exploration has brought us innovation, progress, and cultural awareness.

Look, I am not here to solve all the problems of the world and global politics.

But I am here to say that religion is often used as a reason to divide and conquer, and it is a primary reason I am not religious.

Much like division, religion is also used often to exclude.

While community is heralded in most religions, it is only welcomed when it comes to members of one’s own community.

Many religions reject and are fearful of those from outside the community, and they use religion as a shield to ward off invaders.

Still, I cannot help but wonder if the scripture in these religions placed more emphasis on inclusion and welcoming newcomers if perhaps, we would have less strife in the world.

Indeed, most of the great wars of the world throughout history, much of the death and destruction, has been caused by religion either forcing its way in or pushing people out, or both.

Yes, I have ritual down here as both a pro and con of religion as it can indeed be both.

We want ritual, rites, tradition, and regular practice to make up our daily lives, but we also want to be able to stretch our muscles, try new things, and bring in fresh perspectives.

Sometimes religion can enforce ritual that no longer serves its people or its community.

Martin Luther found this to be true during the Renaissance era when he fought against the many ritualistic injustices of the Catholic church.

It is thanks to him that we had the Protestant Reformation; he actively fought against the rituals of the church that made no sense for the people.

Ralph Waldo Emerson was another like Martin Luther. In the 1800s, he was a very popular and proficient leader of his church.

Then, he began to study the scripture ever more closely.

When he discovered that nowhere in the literature did God call on his people to take the sacrament – to eat the body and drink the blood of Christ – he told his church council that he wanted to stop that practice in his church.

He went on to become one of the greatest spiritual thinkers of all time, leading a movement called Transcendentalism.

This is why sometimes, we have to break with ritual, and why it can be a con in religion.

In the end, you will have to decide for yourself whether you want to be religious, or, like me, spiritual not religious.

Either way, just be sure you follow your heart and your intuition.