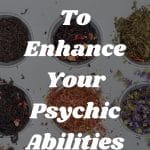 If you have been thinking of honing your psychic powers, increasing your intuition and divination ability, you may want to consider taking some specific herbs.

For thousands of years, witches and healers have used certain herbs in their spiritual work. Herbs are an amplifier, increasing the effectiveness of magical workings such as healing, psychic ability, and divination.

Herbs have amazing magical properties. They are actually one of the most natural magics that the earth has to offer.

Just as with other forms of natural magic and energy, each herb has specific properties that correspond with certain things. That’s why it’s important to know which herbs are right for the magic you are seeking to use.

If you use the wrong herb in your spell, not only are you missing out on its natural powers, sometimes you could actually be counteracting what you are trying to do. So, if you are performing a spell to increase your relaxation and rest, you won’t want to use astragalus root, which promotes energy.

As witches, we seek to be in tune with and work in conjunction with the natural world as much as possible. We know that the universe has spread energy and magic around and we need only learn, discover, practice, to harness that power.

Working in conjunction with natural resources is a great way to ensure the efficacy of your spell. Learning about herbs and each one’s magical properties is essential if you want to amplify your spells and abilities.

There are a handful of herbs that are known to enhance psychic abilities. The most common and popular are jasmine, star anise, and yarrow.

As an herb, jasmine is in alignment with the planet of Venus and is associated with the waxing of the moon. Jasmine’s power is derived from its strong connection with both.

Jasmine is used with love magic and increases psychic ability. Using jasmine when your spells align both types of magic is incredibly powerful, however, it is still a strong amplifier when used for psychic ability on its own.

There are a few different ways that you can use jasmine to enhance your psychic abilities.

Often used in Eastern cuisine, star anise is an extremely popular herb for psychic ability. The mystical is literally alive in star anise, as this herb actually comes from a gorgeous, eight-point star.

As a moon herb, star anise is strongly effective for psychic ability and divination when used during lunar spells. It is used as protection against evil spirits, as well as for third eye power increase.

There are many ways to use star anise during spells or psychic readings. The most common, and often considered the most effective, is burning.

When star anise is burned, its clairvoyant and psychic powers are released, giving you the sight. This ritual allows you to be filled with these powers as they are released from the star anise, taking them into your mind, your third eye, your spirit.

Other ways to enhance your psychic abilities with star anise include:

If you read any folklore or mythology, you may notice that yarrow is often mentioned. Medicinally, yarrow has been used as far back as 60,000 BC and was mentioned in the story of the Trojan War as an herb used to heal Achilles and his Greek soldiers.

While it does have amazing healing properties, yarrow also has magical properties that make it one of the best herbs for psychic enhancement. Scottish folklore claims that you can be given the sight by rubbing yarrow on your eyelids.

The herb is endowed with both healing and magical properties that make it incredibly valuable for witches. Aside from rubbing it on your eyelids, here are some other ways you can increase your psychic ability with yarrow:

While jasmine, star anise, and yarrow are the most popular herbs that witches use to increase the second sight, there are others that may be just as useful. You will want to practice with a variety of herbs to find which ones your psychic abilities are most receptive to.

Keeping jasmine, star anise, and yarrow on hand is important. You’ll also want to try out some of these herbs to create a magic protocol for your spells and divinations:

While there are many herbs known to increase psychic ability, every witch will connect differently with each one. Take some time to get to know each herb and how it affects your magical powers and psychic abilities.

Build a “medicine” cabinet of herbs that you want to keep on hand for magical spells, rituals, divination, and readings. Use the power of the earth to harness and grow your magic.