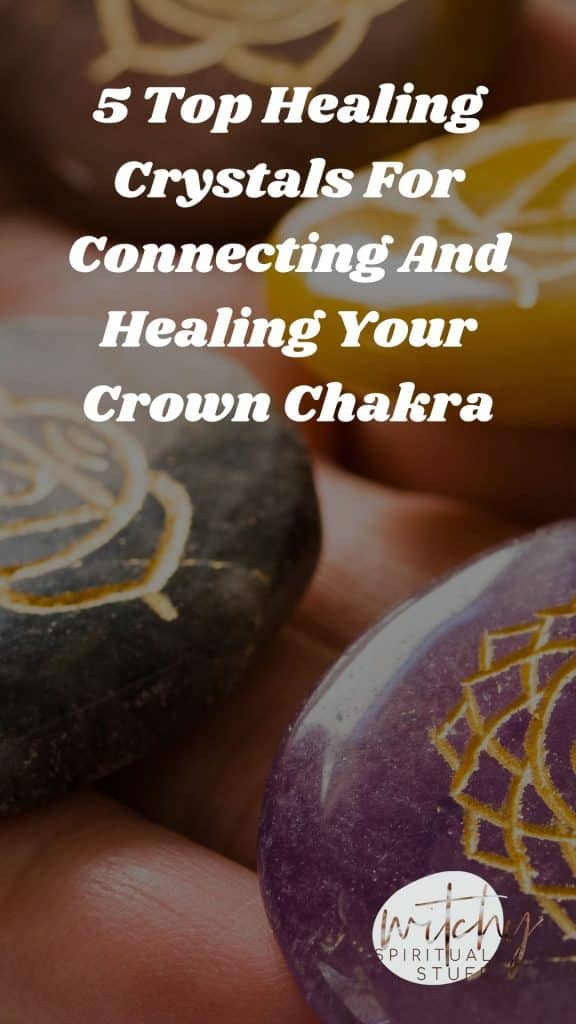 I have known many women in my lifetime and in my adventures as a helper, a healer, and a witch, who are loving, deeply invested in helping others, empathetic, well grounded, creative, strong, and still completely out of touch with how to help themselves.

Why are so many good people, people who should absolutely be succeeding in life and getting all the good karma back to them that they put out down on their luck?

Why does it seem so many of these people fall on a lot of hard times themselves?

It is, in my considered opinion, and in the teachings of the law of attraction and even across the major world’s religions, a lack of connection to the divine.

Connecting to the Divine through Your Crown Chakra

The connection to the divine, to God, to the gods, to source energy, you name it, is traditionally found in the crown chakra, the point at the top of your skull.

All information, messaging, and sensory delivery is found there. It is also where the human pineal gland is found, which is also considered a connection spot for human with their divinity.

If your heart chakra is the place where you find your truest divinity, and it is, then the crown chakra is where you communicate with the divine from which we all come.

Cain and Abel Prove Crown Chakra Connection
As an eclectic witch who does not adhere to any one specific religion (no, we’re not all Wiccan), I love reading stories and finding meaning in the world’s religions.

Christianity is rife with metaphors and parables that help us understand how to be good humans. (Yes, it is also rife with some pretty awful stuff. The joy of being an eclectic witch is you get to pick and choose.)

Cain and Abel, sons of Abraham in the Old Testament, were both good sons, both good worshippers of God. They both worked hard, they both sacrificed to God, they both obeyed the Sabbath, and they both prayed to God.

Abel was rewarded with abundance, love, and wealth. Cain was left with nothing but jealousy in his heart.

As most of you probably already know, Cain killed Abel out of that jealousy.

What could possibly be the point of this story? You have an all-knowing, all-seeing, all-powerful God, who must then know that one brother will kill the other as a direct outcome of one son being shown favor and the other not receiving anything.

Why would God bless one son and not the other? Because that is, after all, how the story is told.

But that is also where most people actually get it wrong.

God Does Not Show Favor

The point of the story, and you can really ask any priest, bishop, or biblical scholar this and you will get roughly the same answer in likely different words, is that while Cain and Abel essentially lived identical lives, Abel was connected to the divine and Cain was not.

Cain had what the Christians would call hate in his heart. He was blinded by his goals, his struggles, his jealousy. That’s what we witches would call a blocked crown chakra.

It was in Cain’s hands the whole time to unblock himself and receive guidance from his God as to how to gain love, wealth, and abundance.

You see, God does not show favor, the universe does not play favorites, the source from which we all come is constantly in communication with all of us at all times. It is up to us to listen, and we listen with an open crown chakra.

Thus, the point of this biblical parable is that both sons were receiving the love of God at all times. Both sons were getting the communication from God. But one son was listening. And the other son was too distracted by his human to connect with the divine.

It Happens all the Time

So those women I’ve known my whole life have had this same problem, and so many people across the world have it as well.

The universe is vast in abundance and there is more than enough of everything for everybody, and no one can take anything from you, withhold anything from you that you do not let them take.

So when you see someone suffering, know that they have put themselves there, blocked themselves from the abundance we all have access to, and the best way you can help is to show them, through your actions, what is possible.

This is not a judgement or a criticism. Being human is hard, and it is near to impossible to have an open chakra at all times. It is not victim blaming and certainly not shaming.

We all simply have a ton of work to do to live ourselves and each other up.

Live by example and unblock your own crown chakra.

How to Unblock Your Crown Chakra

Now you know you need to unblock your chakra if you want to live a life of abundance. You can be open in all other areas of your life and have a blocked chakra and you will still find your path filled with struggle. So how do you unblock it and keep it open to receive guidance from the universe?

You may have heard the expression already, “prayer is asking, and meditation is listening.”

The number one easiest way to unblock your chakra is to sit in meditation. Sit for ten minutes each day, before your day gets crazy, and quiet your thoughts. Work your way up to 15 minutes and then up to 20 minutes. The ideal is to sit quietly and let any outside thoughts pass through and out for 20 minutes each morning.

And the story in your head begins. You turn it into something it isn’t. You spin out, identify with negative emotions, and bam, you’re blocked. Those negative emotions stick with you for life.

I love author and speaker Brene Brown’s suggestion to “assume the best.”

Just change the story and assume that the other person is going through something, didn’t mean it that way, has your best interests at heart.

Do not spiral down and block yourself.

As you go through your day, pay attention to signs from the universe. Know that the universe only speaks in positives and yesses, and watch for them. Where are you being led, how are you being guided, where is the answer to your prayers?

Follow your yes and watch how more guidance comes. The great thing about paying attention is it is essentially using your crown chakra.

And for extra support, during meditation or even to carry with you throughout the day, know which crystals are best for opening your crown chakra.

If you’ve read anything I’ve written on stones, you know I love the clear quartz not only because it provides support for clarity, which is excellent for the crown chakra, but also because it amplifies the power of the other stones it sits with.

Amethyst is the queen of destressing and releasing anxiety, which is essential for unblocking your chakra crown. It will help you change those stories to positive, loving ones.

Selenite is great for keeping you in your divinely loving space. It is warm and full of honor, truth, and integrity. You can step into your divine self and communicate directly with the divine with this stone by your side.

I love howlite for connecting the heart chakra to the crown chakra. If you have also been doing fourth chakra work, this stone is for you. It exudes infinite love and wisdom and helps you remember who you are and where you came from.

This dark blue and black stone is the bold one among this bunch, encouraging you to breathe and speak into reality all of your wildest dreams and desires. It stirs your imagination and allows you to really believe in yourself and your own worth. Labradorite is great for helping you have the confidence to want what you want.

Remember, especially with crown chakra, you must do all the work. The stones won’t work unless you do. Get yourself clear, free of past stories, and into that open loving space. The crown chakra stones will remind you how powerful you are.