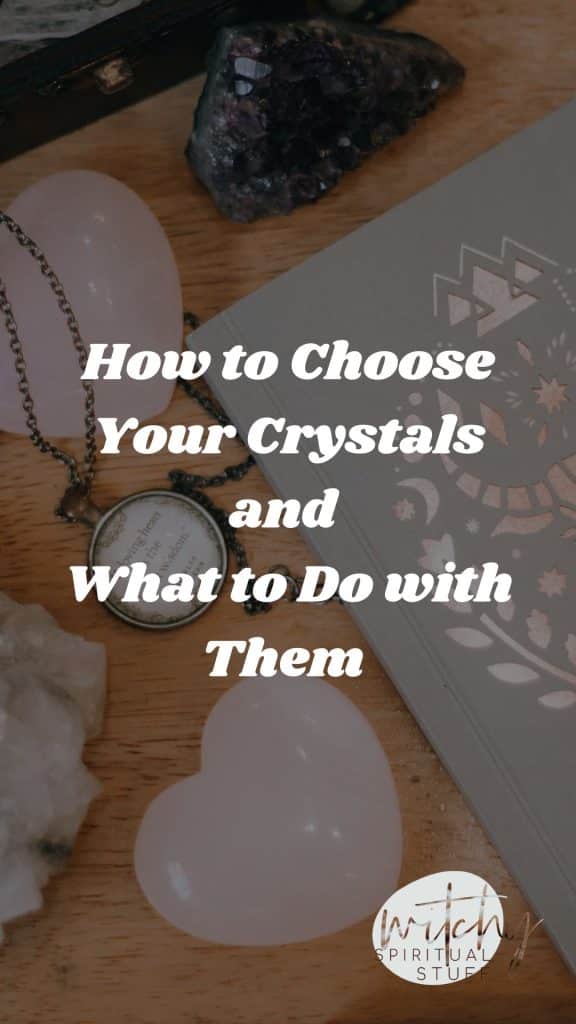 If you’re just getting into witchy spiritual stuff, you may be wondering how to choose your crystals.

And once you do choose them, what the heck to do with them.

I’ve laid out the crystal journey here for you, why crystals are so powerful, how to choose your own crystals, and how they can function in your home and in your life.

The Power of Crystals

As someone who needs science and logic to explain everything for me, it took me a long time to get on board with crystals.

I mean, I always thought they were pretty of course, but why would I collect them? Why would I meditate with them? How could they possibly hold any power?

But then I actually took a much deeper interest in science.

I started reading about physics.

I researched some Albert Einstein.

And I found that crystals are not, in point of fact, just rocks.

I read about Einsteins theory of relativity, how everything is constantly in vibration.

This desk I’m sitting at.

The table I ate dinner with my family at.

The chair we all sat on.

And yes, the rocks.

You see, in the beginning, long before life in the material world existed, there existed only energy.

And we call that energy Source Energy.

From that timeless, spaceless, existence, Source Energy had the will to create… something.

We humans are at the very end of this chronology that is billions of years old.

And it call stemmed from energy.

So, scientifically, in order to create a planet, there must be an enormous amount of energy that bursts into action, explodes, and forms this perfectly balanced planet with gravity that revolves around a perfect sun that feeds it with energy, and a moon that controls its water sources.

And it is all energy.

And, when you think about it, and this part is really cool, we are all made up of the same stuff.

Everything that is on earth has always been on earth.

So whatever was created in the beginnings of this planet was made up of the same stuff that we are made up of today.

There has been nothing new under the sun, as they say.

No new additions or ingredients.

Humans are made of the same material that made up this planet.

We are all the same.

With that in mind, I was thrilled to work with crystals!

But how to choose crystals?

Hang on, we’re almost there.

Why Crystals Work for Us

Now, in addition to the fact that crystals are made of the same materials as humans and that they are vibrating energy at all times, they hold power for us, they work for us, because we say they do.

This part really gets to the main point of our discussion in this piece today, and it relies on a science that is a bit trickier than Einstein’s theory of relativity.

It relies on an understanding of the science of the mind.

Back to Source Energy.

So, in order for Source to create, to have a will, it also had to have a consciousness.

And it is safe to assume that this consciousness is of the highest order as it cannot have created us, humans, no matter how far along the evolutionary chronology, if it did not have a consciousness at least comparable to our own, and likely much, much greater as it also created countless planets and galaxies.

So, we know from that original creation and everything that followed that creation, the very creation of reality, requires will.

That’s pretty much it.

Source Energy had no matter to make more matter with in the beginning of time.

It had only its will to work with.

Which tells us, logically, that all we need to create reality is will.

And this truth is revealed in the power of crystals.

Crystals have power because we say they do.

We humans created that reality.

And soon a story became a truth.

And the more people that believe a truth the more real it becomes.

That is how humans create, alter, and recreate realities.

How to Choose Your Crystals

Developing this understanding is a critical component of figuring out how to choose your crystals because, just as with medicine, plants, food, or anything else, some things work for some people and not for others.

I can tell you, anyone can tell you, what this or that crystal stands for or represents, or what it will do for you, but if you don’t feel it, and really believe it, it won’t work for you.

So, when it comes to how to choose your crystals, you must sit with the crystal, hold it in your hand, muse over it.

Sure, listen to what the experts say about how to manifest with crystals or which crystals will bring you happiness.

And you have to trust your feelings.

One of the most profound lessons I learned early in my spiritual practice was from Arin Murphy-Hiscock, author of The Green Witch, who teaches all about herbs but cautions that in the end, we have to listen to our own inner guidance.

You have to trust your higher consciousness, your higher power, your own connection to Source Energy.

And in the end, whatever you believe to be true about your crystals is true.

I would say that the best approach to take is to study the various crystals first, what the general consensus is on each crystal, and then meditate on where to start.

Give yourself 20 minutes a day on whichever topic is most important to you, then decide which crystal to start with.

What to Do with Crystals

Once you’ve decided how to choose your crystals and which ones are right for you, it is time to decide what to do with your crystals.

How to Choose Crystals for Decoration

When it comes to decoration, you can pick and choose crystals for each room.

Decide what mood you want in each space depending on your life.

I cook a lot, and I have a large family, so I have a citrine and a jade in my kitchen.

I am madly in love with my husband, so I keep a tiger’s eye and a rose quartz in my bedroom.

I keep an amethyst in each bathroom for healing and calming during our bathing rituals.

And I keep a clear quartz in every room of my house for clarity.

How to Choose Crystals for Meditation

When it comes to meditation, I will always recommend a clear quartz for clarity, but otherwise you will have to decide which crystal to choose based on what your meditation will cover.

If you are focused on grounding, you may choose an obsidian crystal.

If you are hoping for clear communication, you may choose a blue agate.

How to Choose Crystals for Spells

Choosing crystals for spells is similar to mediation crystals.

Figure out where you energy is coming from and where you want it directed, and choose your crystal accordingly.

How to Choose Crystals for Chakras

Much of these energetic decision can focus around the chakras, your major energy centers in your body.

As each chakra holds specific energetic power for you and your connection to the earth, the universe, and all other life forms, so too does each crystal hold energetic power that corresponds to your chakras.

My advice is to figure out what chakra you are working with, meditate on it, and then choose your crystal.

How to Choose Crystals for Collection

And then of course, there is your collection.

Just have fun with it!

Crystals really don’t have to be anything more than pretty.

My daughter comes into my office and grabs my crystals all the time, runs off to play with them, exchanges them for her own crystals, gives them to her friends, and brings me new ones.

There is great love in the collection of crystals.

And as long as you take that loving approach, you can never get it wrong.