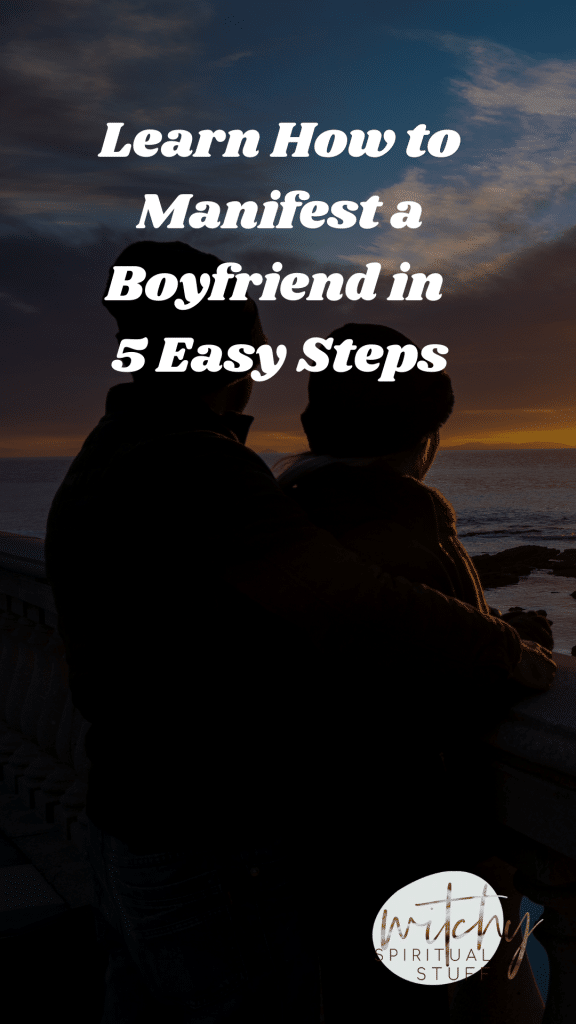 How do you manifest a specific person into your life? Well, the best way is to use the right manifestation techniques and get really clear about exactly what you want before you manifest love.

Who doesn’t dream of true love? At the very least, daydream about meeting and attracting the man of their dreams and living happily ever after!

Manifesting a boyfriend isn’t as hard as it sounds.

We all want a good relationship, and so many of us are out there looking for our soul mate or ideal boyfriend, but the mistake is focusing on that manifestation method instead of working towards a healthy relationship instead.

That’s what I learned growing up on Disney movies and fairy tales anyway. You may laugh, but what if I say our beloved Disney princesses were on to something?

Dreaming and daydreaming about The One, staying positive through life, and everything soon falling into place — all of those sound quite familiar to anyone who manifests or uses a vision board. (Because it’s the same thing!)

Before I go into the nitty-gritty of how to manifest a boyfriend or a loving relationship, let’s go over the basics of manifestation first.

What is manifestation exactly?

The core of manifestation hinges on the belief that we can intentionally cultivate our dreams into reality through our thoughts, actions, intent, energy, and belief.

But can you use this powerful tool to bring you the right person to be the love of your life? The most important thing is that you believe you can.

So, get rid of all those negative beliefs in your subconscious mind and start imagining the type of person you want to be your future boyfriend.

The power of positive thinking, as many people say.

Manifestation shares concepts with the Law of Attraction — we attract what we are feeling and thinking.

Manifesting sends out positive energy in a powerful way and visualizes your goals into reality.

If you’re constantly feeling down and thinking you’d never get a boyfriend, then that’s what is likely going to happen. These common limiting beliefs keep you from finding your perfect match or other potential partners.

But it won’t be long before your wishes come true if you’re approaching life like a Disney princess — putting out positive vibes, staying optimistic about romance, and visualizing your dream BF.

How to Manifest a Boyfriend

I’ve got a few beginner-friendly steps to help you manifest the boyfriend (or girlfriend) of your dreams.

So let’s get down to the good stuff.

💞 Decide on What You Want and Why You Want It

The first step is to get a clear view of your goals and plant the seed of intent.

Next, you need to answer the “whys”

Why do you want a relationship? And why now? Your answers to these questions can determine whether you’re ready for a relationship in the eyes of the Universe.

Be honest with me: if you want to have a boyfriend to make someone jealous or to get revenge on someone, will you be giving out and attracting positive vibes?

However, if your underlying reason for wanting to attract a guy is because you feel ready for it and want to experience a loving partnership, then that’s the kind of energy the Universe will respond to positively.

🧿 Visualize It and Embody It

Visualization is a large part of manifestation.

The next step is to visualize what it would feel like to be in a loving relationship in the present tense. Who is your dream partner? What does quality time with them feel like? This will immediately up your vibrational frequency. Because if you act as if you’ve already got it, then the universe assumes you do, and there you go.

Embody the feeling of being in love, the ideal relationship with your life partner, and how good it feels in your everyday life. Make mini-movies about your newfound, serious relationship in your mind, play it on a loop, and get yourself excited about having a boyfriend!

Remember, in manifestation, your energy is what cultivates and attracts your reality.

You can visualize and embody your intent to find your dream partner and the perfect relationship in countless ways.

How To Manifest a Boyfriend on Paper Using the 369 Method

There’s the TikTok viral 369 manifestation, which draws upon the power of numbers. This manifestation technique involves writing your intent three, six, and nine times in the morning, afternoon, and evening.

You can also try the pillow method, where you write down your affirmations or manifesting statement and sleep on it by putting it under your pillow.

I’m quite partial to journaling and using visual boards as a way to channel my energy, but you can try whichever technique works for you.

➡️ Get Rid of Limiting Beliefs

Limiting beliefs are the negativity that surrounds you and constrains you.

Some examples of limiting beliefs include:

Similar to how positive affirmations can pave the way to getting a boyfriend, limiting beliefs can block your way.

If you’re pushing out intent and energy about finding The One, then align your actions with it. Don’t ignore any opportunities the Universe sends your way!

Keep an eye out for potential opportunities to meet new people and step outside of your comfort zone.

Don’t just sit around in your room! Yes, you should trust the Universe to work its magic, but for that to happen, you also need to be proactive.

On the flip side, though — not everything is a sign from the Universe! Be smart about reading the signs.

Don’t say yes or pursue someone who doesn’t match the qualities you’re looking for in a boyfriend. That’s just you pointing the Universe in the wrong direction.

Okay, I’ll say it — this step’s the hardest. But you need to learn how to step back and surrender your love life to the Universe.

Do not obsess over specific outcomes. That’s not healthy and doesn’t emit any positive energy. It’s also a whole other matter from visualizing your intent.

Obsessing over your progress and certain outcomes shows the Universe that you don’t believe in manifesting.

Just be open for love and your ideal partner and trust the Universe to work its magic.

No Room for Doubt

I know what some of you might be saying right now, “Those steps are too vague! They’re more like generic tips!”

Some of you might even be starting to doubt me and the process.

If there is ever one thing that would undo all work you put into manifesting, it’s having doubt.

There’s no place for wishy-washy feelings for anyone who wants to manifest anything!

These steps I gave may seem generic or vague to some, but it all serves a very important purpose: they help you visualize your goal, focus your emotions, and align your intentions with the universe.

They help you let go of thoughts, beliefs, and emotions that can hold you back and block you from connecting with the universe.

How To Manifest a Better Relationship With Your Boyfriend

Often it can be really hard to manifest a better relationship when all you see is the negative things happening. So, instead of seeing all the things your significant other is doing wrong, start to see what they’re doing right.

Manifestation, is all about getting what you put out there, so if you start to see the good in them, and then your person starts to see the good in you before you know it, all those bad things you couldn’t get over just don’t have any room to exist in your life anymore.

Can You Manifest A Boyfriend Overnight?

True love is yours. You just have to be open to taking it when the universe presents it to you.

Listen to What the Universe Is Saying

The five steps I mentioned are the core to manifesting virtually anything — not just how to manifest a boyfriend.

When you follow those steps, you are laying the foundation for the Universe to build your dreams, whatever they may be.

Trust me when I say manifesting will bring you the loving relationship you’re looking for. Most importantly, trust the process and trust that the Universe will give you what’s best for you.

How to manifest a boyfriend

Get clear about exactly what you’re looking for in a boyfriend, and believe that you already have him in your life. Start acting as if you already have what you want, and the universe will give it to you.

How to manifest a better relationship with your boyfriend

The reason manifesting a better relationship doesn’t always work out is that we have to take the blame for the things that are wrong in the relationship that we can personally change first before we can ask the universe to help.

How to manifest a boyfriend on paper

The 3-6-9 method is the easiest way to manifest a boyfriend by journaling on paper.

How to manifest marriage

Manifesting marriage is a big undertaking, but it can absolutely be done. Remember to find out if they’re really the person you’re supposed to be with before you start manifesting the rest of your lives together.
Once you’ve established that you’re meant to be, use the 5×55 law of attraction method, and you will have a marriage proposal in no time.