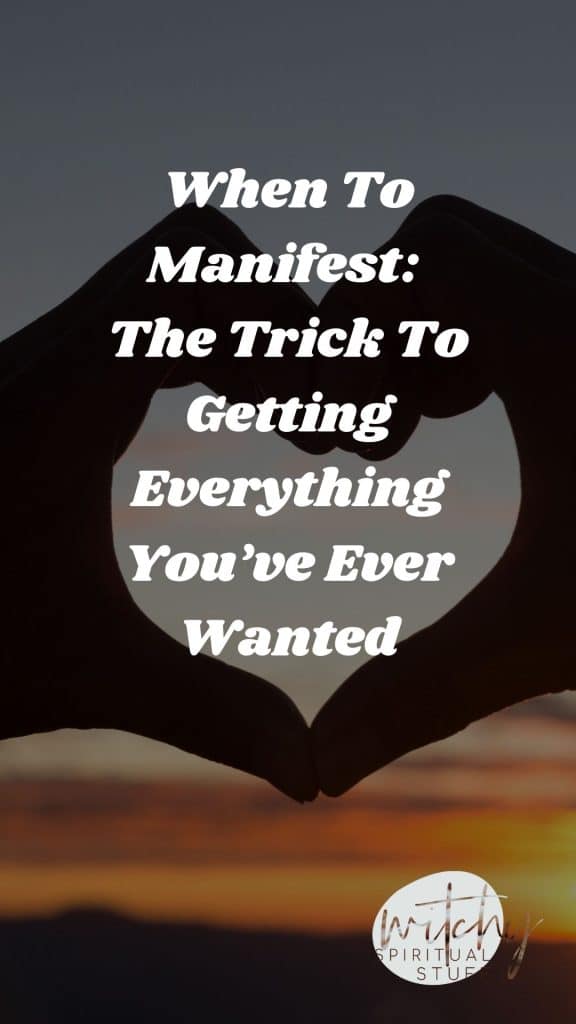 I know you know how to manifest, because we talk about the best ways to do that all the time, but do you know when to manifest?

The situation in the world today can be pretty discouraging — I know it is for me.

People aren’t only affected physically, but also spiritually and emotionally. For many, it’s hard to even visualize a future that can bring them success and fulfillment.

But is this really impossible to do? Can you really put your dream job, new house, and other good news on a vision board and get it all?

The belief that anything is possible can sound cliché, but whether you admit it or not, I believe there’s still a lot of truth in it.

Other people would probably say that there’s no scientific basis to prove this, but the fact that humans are hot wired for survival is enough scientific evidence for most to know that we don’t just give up easily.

We can struggle, sure, but it’s this belief of positive affirmations and the manifestation process that has enabled the most successful people to achieve what they have. You can achieve this too when you practice manifesting.

Manifesting is a concept that’s often associated with the law of attraction: when I think it, it will happen.

It sounds pretty easy, but what most people tend to miss about manifesting is that it’s a process. It’s not about closing my eyes, dreaming of having a million dollars on my bed, and suddenly waking up to that exact same vision.

Manifesting is passionately aspiring towards a specific goal and taking the needed actions to make it possible.

The problem with subconsciously manifesting is that you aren’t completely aware or mindful of the actions you’re taking. This can lead to some negative results and dissatisfaction.

Let me be very clear, though, that nobody manifests their own trauma.

Trauma is often a result of many external forces that are beyond your control.

Nobody can change other people, and to say that you “manifest” an abuser or an unfortunate event that led to your trauma isn’t justified. What you can manifest is the way you handle your experiences, good or bad.

That aside, manifesting is a great way to draw positive energies toward your life and your circumstances. Get rid of the negative emotions and negative thoughts and start really focus on a specific outcome you want to get the best results when you manifest.

But when is the best time to manifest?

Here are some of the best times to manifest:

I know a lot of people say you should manifest at a certain time, or under a new moon, or a full moon. But the truth is that you have to manifest when you are ready and willing to accept what the universe believes already belongs to you. It’s not as much about moon rituals as much as it is manifestation techniques.

You have to take those important steps to understand the real power of positive thinking.

1. Manifest When You’ve Come up With a Specific Goal

The reason why manifesting doesn’t seem to work for some people is because they don’t have a specific goal in mind.

Manifesting is similar to driving. I can’t reach my destination if I don’t have one in the first place. I’ll end up going around in circles.

Which leads to feeling unfulfilled, dissatisfied, and generally unhappy.

Manifesting is about collaborating with the universe. But here’s the thing, you have to let the universe know what exactly you want it to help you achieve it.

You can’t let negative energy take over when you are manifesting. It’s positive thoughts only.

Knowing when to manifest means being specific with your goals, so you forge a clearer path toward them.

For example, if you want to get into a relationship, you can’t just ask the universe to give you a potential mate.

Instead, you can ask yourself the following questions that can clarify your heart’s desire:

These are just some examples of questions that can help you visualize the kind of partner you want.

Remember, during the practice of manifesting, to really let it sink into your subconscious mind so your energy can seek out a vibrational match for you. This kind of source energy goes a long way to givine you the most successful manifestations.

When you know what you want, it’s easier to think about the actual steps you can take to meet the person you’re eager to share a romantic relationship with.

2. Manifest When You Have Self-Awareness

Aside from knowing what your goals are, you also have to know yourself deeply to be able to successfully manifest your desires.

What is often detrimental about subconscious manifesting is that you can be bogged down by self-limiting beliefs, which you don’t even know you’re exercising. This is the perfect time to take that next step in your manifesting journey with law of attraction scripting or even just a simple manifestation 369 journal.

Good things come to those who script in their daily practice.

After you’ve come up with your goals, deeply and honestly reflect on what you believe you can and can’t do. Before you can overcome self-limiting beliefs, you have to know what these are exactly.

Here are some questions that I’ve found helpful to ask to figure out how well you perceive yourself and your ability to achieve happiness and fulfillment:

It isn’t unusual for people to be critical of themselves — I know I am — but what you want to avoid is doing this excessively.

Remember that even Newton’s Third Law of Motion tells us that for every action, there is an equal and opposite reaction.

Don’t sell yourself short if you want the universe to give you what is your due.

3. Manifest After a Cleanse

Before you start taking the steps to fulfill what you want to manifest, do a house cleansing first.

This will dispel the other negative energies in your immediate surroundings and help you have clarity of thought.

Your cleansing ritual doesn’t have to be elaborate. But, it is necessary if you want to feel lighter, calmer, and more in tune with yourself and your sanctuary.

Are You Ready To Manifest Your Goals?

I’ve found that the above tips have helped me figure out when to manifest to reach my own goals.

By waiting for these opportune times and asking these questions, you too can manifest your own goals! Just remember — manifesting takes action as well.

Don’t be afraid to take steps to achieve your dreams.