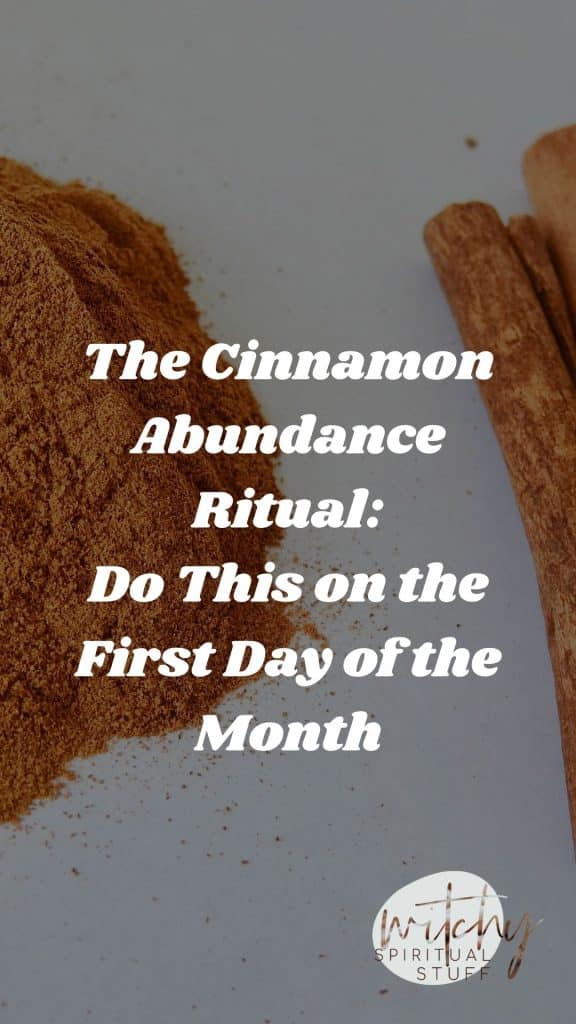 Have you heard about blowing cinnamon in your doorway on the first of the month? It’s more than just something you saw your best friend do in their Insta story.

People have been using cinnamon for abundance for millennia, both spiritually and medicinally, so it is no wonder we now have a TikTok trend that plays on the powerful spice.

Here’s The Cinnamon Ritual You Should Do Each Month:

You can use this one or create one of your own.

Cinnamon for Abundance: Why It Works

First of all, it is important to note that pretty much any spell, given words, ways, and will, is going to work if you place enough focus and energy into the spell.

✨ Cinnamon Blowing 1st Of The Month

This cinnamon ritual could work just as well with egg shells, powdered sugar, coarse salt, flower petals, and various herbs, you name it.

Different herbs mean different things, so you can set an intention based on whatever it is you want.

What does blowing cinnamon in your front door do?

The key is to connect your thoughts, your deeply held beliefs, to the ritual and then pour your energy into the actions you take.

So, whether you believe in magic and cast this spell, knowing it will work, or you don’t believe in magic at all but would like to be more open to what is already happening in your life, this cinnamon ritual can change your life.

What To Say When Blowing Cinnamon

People make way too big a deal about this. The truth is you need to say what resonates with you, but here are a few things you can say when you are blowing cinnamon in your doorway on the first day of the month.

The Beliefs Around Using Cinnamon for Prosperity, Positivity, and Money

As noted above, the ways used for casting a spell matter because of deeply held beliefs.

Cinnamon works for abundance because it has deep roots in human civilizations across the globe as a spice of abundance.

The cinnamon tree is native to the far east, and it has been used by Chinese spiritual practitioners for thousands of years.

It is a fiery herb that promotes warmth, so it is associated with masculine energy, which is provider, physical strength, and protector energy.

How To Use Cinnamon To Attract Money

The use of cinnamon is believed to promote a free flow of Chi throughout the body and spirit.

Because it has such a high vibration, it has naturally been associated with good fortune and wealth.

It does not hurt that cinnamon is a powerful herb for its medicinal properties.

How do you bless your house with cinnamon?

You can use either cinnamon sticks, cinnamon essential oil, or cinnamon powder and rub it along the front of your door. In doing this, you’re attracting prosperity to your household.

Do I have to do the cinnamon ritual on the first of the month?

The cinnamon abundance ritual works best on the first of the month, but you can do it any day you choose. If you’re feeling particularly abundant or energetic one day, then go for it!

What does burning cinnamon in your house do?

Cinnamon works really well for cleansing and dispelling the negative energy from your home. You can also use it to attract money and abundance. Plus, it smells like a fall day.

How do you use cinnamon for energy?

Cinnamon can give you a physical and spiritual energy boost when you consume it in the mornings. I love it with coffee. You can stir your drink clockwise with a cinnamon stick and think abundant thoughts in order to bring a little happiness into the rest of your day.

What does the Bible say about cinnamon?

Cinnamon for Abundance in Medicine

One of my favorite things about practicing magic is how deeply rooted in science magic really is.

As author Alix E. Harrow notes, magic is merely the gap between what a woman has and what she needs.

Magic is the name we give to things we know but can’t “prove” yet.

And today, a lot of what we say we can’t prove has ample anecdotal evidence, but scientists have either not gotten around to studying it (usually for funding reasons), or they have not quite put their finger on explaining it in scientific terms.

Realize that we once thought of humans flying through the air as magic.

Plant medicine is powerful magic, and sadly it gets maligned by much of science today as “lacking in sufficient evidence.”

But that’s only because there is not much funding to be found in studying the powers of plants that are either cheap or free.

No major corporation can make billions of dollars for their stockholders off chai tea, a blend of cinnamon, star anise, ginger, and turmeric – powerful herbs that hold antiviral, antibacterial, and antioxidant properties akin to pharmaceuticals with zero side effects.

So, cinnamon has not gotten the rave reviews in the medicinal world that it really should.

The power of cinnamon sticks is massive, and you can use them in stick form, powder form, or as essential oils.

Based on actual scientific studies that have been done, we know cinnamon has:

And that’s just a surface review of the incredible powers of cinnamon.

It is no wonder that civilizations have used cinnamon in their spiritual and medicinal practices for centuries upon centuries.

Just a single teaspoon of cinnamon a day can greatly improve your health and well-being.

As soon as a culture introduced cinnamon to the lives of its people, they would have noticed the effect and hailed it as a wonder herb.

And again, there are no side effects, so there would be no risk involved in prescribing a cup of chai every day to people who are suffering.

Today, we take pharmaceuticals, doctors, and hospitals for granted, considering them magical pills and gods, centers for great healing.

The reality is that doctors today are immensely overworked and intensely undereducated in nutrition and wellness.

And drugs often do far more harm than good.

And people often get sicker in hospitals than they would have at home.

We have created a myth in our society that we cannot heal ourselves.

And cinnamon, and cinnamon for abundance, is just one example of how wrong we have gotten that myth.

None of this is to say that we should never see doctors, take pharmaceuticals, or go to the hospital.

Thank the gods for lifesaving vaccines, antibiotics, and surgeries.

But, as many lifelong physicians themselves will tell you unless you have an acute emergency, you are far better off educating yourself on wellness and treating yourself.

You are, nine times out of ten, your own best doctor.

In addition to the doorway ritual with cinnamon, you can integrate cinnamon for abundance into your life in many other ways that will enhance your monthly ritual.

I like to keep a pot of the chai I described above on my stove at all times. My family has acquired a taste for what they call my “ginger tea,” and we usually cycle through one pot every two to three days.

Boil the water with the contents for about 30 minutes to extract all the properties of the roots and spices.

Turn off the stove and add honey to taste

Drink one cup of this chai every day after lunch.

I find that if I drink it after 3 PM, it keeps me up at night; note that cinnamon and ginger are both energizing herbs.

I am apparently super sensitive to anything energizing.

I also have a cinnamon-scented straw broom hanging by my front door to welcome abundance.

Remember, the rituals are not about the materials you use or even necessarily the words you use.

They are about the power with which you imbue them.

You are the spell.

So if you believe you are worthy of abundance, perform the ritual on the first day of each month, drink the tea daily, hang the broom, and open your eyes.

Cinnamon for abundance will deliver.

In the end, good luck is yours to receive, negative energy is yours to release, love spells are yours to cast, and your bank account will grow as you expect it to.

So learn to expect it to.

Train yourself to believe that you hold all the power in the palm of your hand, whether it is a handful of cinnamon or not.

Each new cycle you enter is an opportunity to begin your life in the right place. So draw on this powerful plant, among all the others, to harken back to ancient times and reclaim your right to a safe place in the interior of your home.

The most important thing is the positive energy you bring in different ways.

Perform your rituals under a new moon, a crescent moon, or in whatever natural state you find yourself.

No matter what, you are the spell.

You can manifest money or love, fortune or joy, or career success, all with the magical properties you already have within you.

It is your own energy that brings you new beginnings and positive thoughts, which lead to good things like abundance.

Have faith in yourself. You’ve got this.