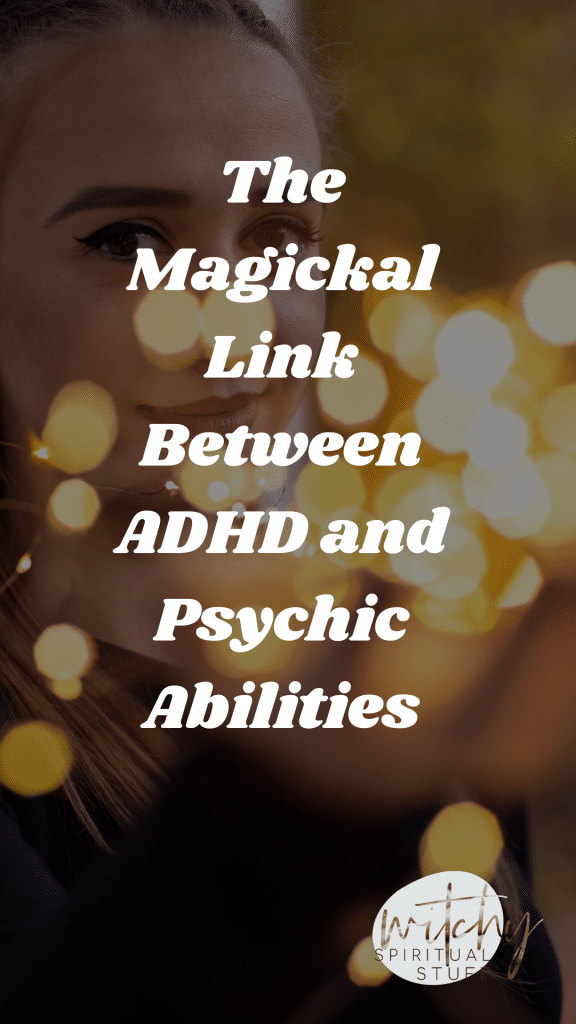 Everyone has unique talents and proficiencies that they carry with them into the world. Unfortunately, our society often fails to embrace people who don’t match the norm.

That’s especially true for neurodivergent people, whose brains are wired differently from others. Neurodivergence often coincides with a higher sense of empathy or perception.

Yet sadly, many people consider conditions such as ADHD to be a weakness or deficiency. They believe that those with ADHD are misbehaving or disconnected from reality — or that it’s just a disease among little boys!

Attention-deficit hyperactivity disorder appears in a wide range of ages, genders, and backgrounds. And while it can be frustrating in our modern world, it does lend itself to greater creativity and problem-solving.

In fact, rather than being out-of-touch, people with ADHD often demonstrate a higher state of attunement with the Universe. Some believe that ADHD confers psychic abilities — the opportunity to see beyond normal perception.

Could this be true? How can you embrace your ADHD and unlock a greater connection with Planet Earth? Let’s take a look:

People with ADHD sometimes describe their “butterfly brain” that flits from flower to flower. That’s the “attention-deficit” part, although truly, it’s more accurate to say that ADHD brains often struggle with focus rather than attention.

ADHD can lead to feelings of overwhelm because the brain is observing multiple stimuli at once. However, this can be a good thing as it helps solve complex problems.

Due to changes in the basal ganglia, ADHD allows the brain to concurrently send messages across the brain. While many people process specific stimuli in a set order, the ADHD brain has higher connectivity, if not efficiency, in executive function.

By rapidly switching contexts, the ADHD brain can more efficiently collect and process disparate information into a singular narrative. This allows it to see truths and solutions that may not be immediately obvious.

That is indeed a type of higher-level perception! Thanks to that greater connection, people with attention-deficit disorder often notice things others do not — for better or for worse.

Another way to look at this is the signal-to-noise ratio. People without ADHD filter out everything they don’t need, so they perceive the signal more than the noise.

People with ADHD pick up all the noise as well — but this allows them to catch subtle cues and stimuli, and that makes them a bit more intuitive. That’s why psychic abilities are often considered one of the many ADHD superpowers.

The color of our aura often reflects our psychological and physiological characteristics. “Indigo people” are said to have an indigo aura, perhaps because their Third Eye Chakra, which is indigo in hue, is very active.

They also tend to be resistant to authority, bored in traditional society, and frustrated in modern lifestyles. They are circular and complex in a straight-laced world.

Those are all attributes of ADHD as well, so naturally, there seems to be an overlap between neurodivergent people and starchildren. It’s unclear whether people with an indigo aura are more likely to have ADHD or vice versa.

In any case, that high sense of empathy, intuition, and purpose is more often a blessing than a curse!

ADHD Disrupts Your Sense of Time

For millennia, psychics have been known for their ability to perceive truths outside linear time. They may predict the future or embrace a circular model of time.

It’s a bit like the creatures in Arrival, where past, present, and future are all part of a perpetual cycle. But that’s not science fiction — it is how time works.

We merely perceive it as linear.

However, people with ADHD have a different sense of time. That can cause problems if they experience “time blindness,” which is the inability to predict the time a task will take.

Yet they also tend to perceive time as hyper-present. The past, present, and future are all now.

That’s because ADHD enlarges the hippocampus, which governs working memory and time perception. People with ADHD often hold many memories at once, creating a more cyclical sense of time.

While that may not work well in many modern contexts, it’s quite helpful for psychic abilities. When we free ourselves from the artificial idea of linear time, we can perceive past and future events as part of the present moment.

Anthropologists have long observed that diagnoses of “mental illness” or “psychological disorders” are culturally defined. In other words, those who fall outside a society’s norms are often anthologized.

ADHD brains simply work differently than other brains, and that can open up a new realm of potential. If you have ADHD, you often have greater intuition that allows you to better connect with Earth and the Universe.

When you cultivate that intuition, you can stimulate those psychic abilities. Many people with ADHD find that they can easily anticipate what others will say or do.

They also see the greater truth of a situation, as well as the solution that no one else has discovered. Their enhanced perception allows them to remain calm in times of crisis.

Rituals for Psychic Abilities and Intuition

To further align and open your third eye chakra, which is already hyperactive among indigo children, practice these rituals:

Meditate while holding a crystal that tunes into the Third Eye, such as indigo kyanite, or sodalite, aka the Logic Stone. You may even place the stone on your forehead, where the Third Eye Chakra resides.

To gain insights into a problem or future outcome, perform a tarot reading or your preferred divination ritual, or simply meditate on your question with the help of sapphire, emerald, or labradorite aka the Wizard Stone.

When navigating a complex environment, enhance your perception by carrying iolite, the Wayfinding Stone, or azurite. Fluorite also helps ward off energy vampires.

The more you nurture the Third Eye and tap into your intuition, the stronger your psychic abilities will become. Embrace your indigo self!

Rituals for Focus and Attention

While ADHD has many wonderful attributes, it remains a challenge for many people, especially in our fast-paced, highly linear world. To refine your focus and overcome feelings of anxiety or scattered attention, practice these rituals:

Meditate while holding clear quartz, tiger’s eye, or fluorite. Here are some other recommended crystals for focus.

If you struggle to empty your mind, perform a mindfulness activity such as stitching or sowing seeds.

ADHD brains produce higher levels of theta waves, which are associated with states of mindfulness. While it may be hard to stop the butterfly brain, you can still calm its flitting pattern.

While studying or learning something new, hold hematite, which is especially helpful for those with ADHD as it creates a protective zone of mental clarity.

As you move throughout the world, carry amazonite to protect yourself from negative energies and relieve stress or anxiety.

Resolving the uncomfortable symptoms of ADHD can help you harness the true power of your neurodivergent brain. As you open and align your chakras, you’ll gain new insights and a deeper sense of clarity and calm.

Let’s abandon the idea that a behavioral disorder is a weakness. Many mental health conditions simply describe neurodivergence, reflecting the diversity of the human experience.

People with ADHD often feel that they have psychic abilities, and it’s no wonder as they have higher senses of empathy, perception, and intuition.

To gain greater clarity as you move through the world and connect with the Universe, nourish those abilities. From crystals to chakra cleansing to divination, there are plenty of ways to do so.

Above all else, let’s remind each other that we are all magickal beings on Earth, and we all have unique talents to celebrate. ADHD can absolutely be one, if you embrace it.