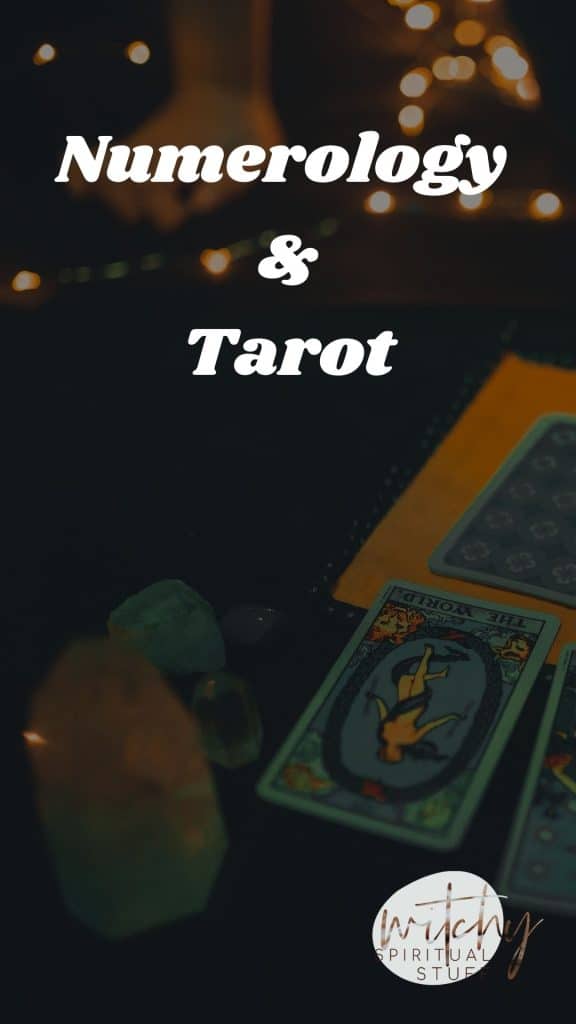 Let me explain a little more about how Numerology can be used to increase your knowledge and understanding of the individual Tarot card meanings, and enhance your tarot card readings.

What is Numerology? In a nutshell, Numerology is the study of the numbers, or more accurately, the patterns of numbers that occur in our lives.

The earliest records of the use of Numerology date back to Egypt, and Babylon. There is ample evidence that Numerology was used extensively in the ancient empires of Rome, Greece, China, and Japan as well.

The way that we interpret and use Numerology today is most commonly thought to be the work of the Greek philosopher, Pythagoras. Essentially, Numerology

Like Numerology, Tarot is an ancient form of divination dating back to the earliest advanced civilizations. Most commonly thought to have originated in 14th century Europe, Tarot card reading has been used for centuries to offer insight into the events of our current and future lives, and to provide a tool for reflection and introspection on ourselves and the world in which we live.

How Are Numerology And Tarot Connected?

Tarot and Numerology are both ancient forms of divination dating back to the earliest known advanced civilizations. Each has been used extensively throughout the ages to help humans make sense of the events in their lives, prepare for unseen future events, and better understand themselves and the world around them.

While Tarot and Numerology are two unique divination forms that operate independently from one another, they can, and have, been used synergistically to enhance the power of each.

Though Tarot and Numerology complement one another in many ways there are two significant areas where Numerology can be used to significantly enhance your tarot readings.

First, Numerology can be a big help in learning and remembering the individual meanings behind each of the 78 tarot cards.

In addition to helping you learn and memorize the meanings of the various tarot cards, Numerology can also help you to delve deeper and clarify the message being presented by the individual cards in your tarot card reading.

Let’s take a more detailed look at the intersection between Tarot and Numerology, and the ways in which Numerology can enhance your understanding of Tarot, and help to improve the quality of your tarot card readings.

A traditional Tarot card deck consists of 78 individual tarot cards. These 78 cards are divided between what are known as Major Arcana, and Minor Arcana.

Numerology can help beginner tarot readers to memorize and understand the meaning of each individual tarot card by learning the numerological associations of each of the individual cards.

Let’s explore the meaning of each of the tarot cards, and the symbolism of numbers attached to the individual tarot cards below.

In the earliest known tarot card decks, the Major Arcana cards essentially represented the trump cards of the Tarot decks. Each of these 22 cards carried its own unique symbolism and meaning. Most of the earliest symbology was based on the elite 15th-century Italian courts where they first originated.

Let’s explore the first nine Major Arcana cards to learn more about how Numerology can be used to enhance the understanding of Tarot card meanings, and clarify the messages presented in a tarot reading.

The symbolism and meaning associated with The Fool card has shifted over the centuries from that of a base level representation of humanity at its most hedonistic and reckless, to that of an innocent soul setting out on an adventure blissfully ignorant to the challenges and peril that they are about to head into.

In Numerology, the single-digit zero (0) represents innocence, purity, and new beginnings. Taken together the two are often taken to represent the concept that we may need to let go of preconceived notions and remain open to any new experiences that the future may hold.

The Magician card has represented everything from healer to transformative magic, and ritual over the course of time. Today, The Magician is most often taken to represent the power to heal ourselves or to manifest our dreams and wishes.

Numerology associates the single-digit one (1) with manifestation, creativity, and attraction. Taken as a whole we generally read The Magician as a message to trust in our own strength and to have faith in our intuition.

In Numerology, the single-digit two (2) represents unity and balance. Taken together, The High Priestess generally conveys a message of focusing on self-development and personal, intellectual, and spiritual growth.

Numerology tells us that the number three (3) represents fertility and abundance. Numerology and Tarot meanings combined tell us that The Empress card represents the power and the fertile abundance that radiates from within us and from the world around us.

In Numerology, the number four (4) portrays structure and stability. As a whole, the Emperor card signifies the ability to rely on our own strength, and inner structure to complete necessary tasks.

In ancient times, those who wished to seek higher learning would need to do so through the monastery. The Hierophant would determine admission to the monastery, and the course of studies.

Numerology represents the number five (5) as conflict or challenges. When combined, the Hierophant card generally conveys a message of mastery of difficult life lessons and learning from challenges and experiences.

Though the exact meaning of The Lovers card shifts depending on various changing cultural ideas of romantic love, the general meaning remains that of the challenges associated with choosing one’s ideal romantic partner.

In Numerology the number six (6) represents communication, harmony, and cooperation. When combined, the message associated with the Lovers card is generally one of awareness of the need for compromise, and communication to bring harmony between two partners.

In tarot, the Chariot card generally represents the triumph that can be found in freedom, and in the willingness to make great change.

Numerology tells us that the number seven (7) signifies stagnation, reflection, and introspection. This is a particularly good example of how Numerology can help to clarify and enhance the message of the individual tarot card. In this case, the combined meanings of The Chariot card encourage us to embrace change while paying careful attention to the path forward.

In Tarot, the Strength card represents the power of nature, and of the feminine ability to bring balance and harmony to wild powerful forces.

Numerology designates the number eight (8) as representing sturdiness, and protection. Combined, the Strength card offers a message of nurturing a strong, stable self by balancing our ego and our intuition.

Finally, Tarot generally defines the Hermit card as meaning the need to recognize the lessons and knowledge provided by unconventional teachers.

The number nine (9) represents growth and expansion in Numerology. Numerology and Tarot combine to clarify the message of the Hermit card as one of thinking outside the box and looking for the lessons and growth found in the natural world.

The remaining Major Arcana, along with their accompanying numerological associations are shown below.

Tarot decks that are based on the classic Italian and Spanish tarot deck styles generally contain 56 Minor Arcana cards. The Minor Arcana are broken up into 14 numbered cards for each suit.

Wands: Wands may also be seen as staff, clubs, or batons, or staves depending on the particular variation of tarot card deck being used.

Swords: Swords may also be seen as blades in some tarot decks.

Pentacles: Pentacles may also be referred to as disks, coins, or rings in different tarot decks.

The four court cards are represented by Page, Knight, Queen, and King, though you may find Prince and Princess themes replacing the Pages, and Knights in some tarot deck variations. Just as with the Major Arcana, Numerology can be used to clarify, and enhance the meaning of each of the individual Minor Arcana cards.