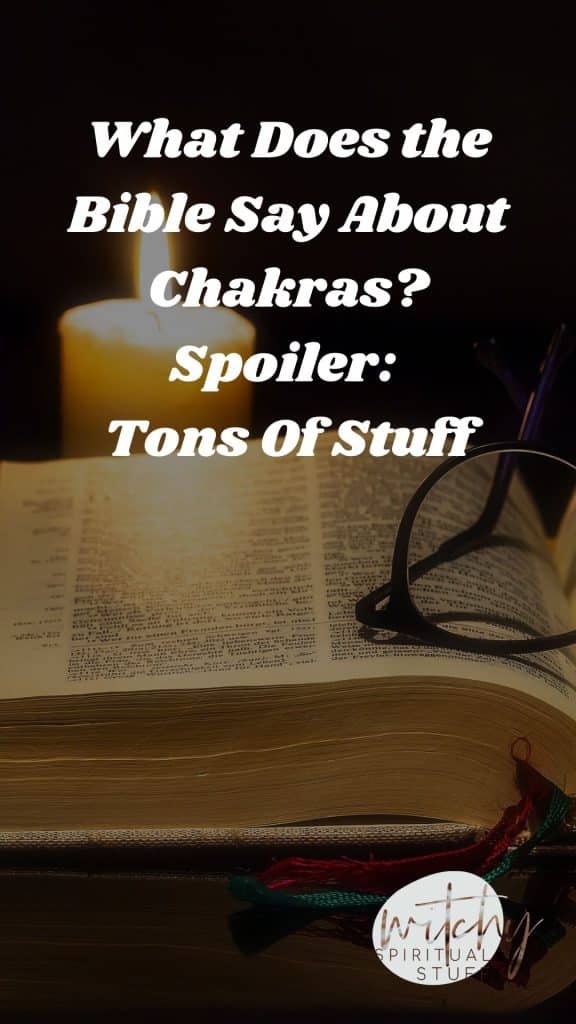 I have been curious about chakras for as long as I can remember. I know they are energy centers in the body. I also know that the concept is deeply rooted in Hinduism.

But why is it that many people, even those from a Christian tradition, are using this same concept for spirituality and self-improvement? Doesn’t that go against their faith?

This has made me wonder, “What does the Bible say about the chakras?”

The Bible, for one thing, contains many references to the human body and its energy centers.

This may be surprising to know because people in biblical times didn’t know that much about anatomy or physiology. So, how were they even able to identify such energy centers without knowing much about how the human body works?

The connection between chakras and spirituality can be found in specific verses in the Bible, which I will explain in detail later.

Popular Perspective on the Chakras

As far as I know, the word “chakra” is nowhere to be found in the Bible. This probably explains why some people think it’s not something to be messed with because it comes from a religion other than Christianity.

The term itself now usually falls under what we call “New Age” beliefs, which focus on healing and personal transformation.

Followers of this movement also study mystical knowledge and tend to have beliefs that are outside the norm. This is probably why the study of chakras often feels otherworldly for some people.

Chakras seem to be shrouded in mystery because they remain unseen to this very day. And the scientific community can be very stringent when it comes to things without proof.

That’s why any study on the chakras has always been limited to metaphysical research.

These reasons alone are enough for other individuals to slam their doors on understanding what makes chakras so special.

Plus, it doesn’t help that there are no direct references to the chakra in any version of the Bible. So they probably have a good basis for not using them to elevate their spirituality.

Where Are the Chakras in the Body?

Before I take a deep dive into how the Bible references the chakras, I will talk about where exactly these energy centers are located in the body — in the astral body, that is.

Chakras are thought to be whirling discs found along the spine, starting at the base and running upward to the crown of the head.

Each chakra is known to radiate its own color, corresponding to these specific endocrine glands in the physical body:

These seven main glands match with the seven chakra points. It’s hard not to see the parallelism, especially when I think about how the chakras function to balance the energy flow in each of these major glands.

It is believed that when any of the chakras are blocked, the energy cannot flow freely. This negatively impacts an individual’s health and well-being.

The main principle behind the chakra points is for energy that radiates from the base of the body to course smoothly through the spine until it reaches the top of the head.

Once this energy reaches the crown, it is thought to burst forth and wrap the entire astral body in nothing but pure love and light.

How the Bible References the Chakras

I know for a fact that there is a wealth of information that can be found in the Bible if we only know how to read between the lines. And I’m not just talking about spiritual information, but stuff about the physical world and how it connects to what we already know.

Before I delve into this, I want to emphasize that the term “chakra” is not a dirty word, nor is it evil. I know some may disagree with me on this.

This is probably due to how the Bible references the serpent as a representation of Satan. And because teaching refers to the latent energy at the base of the spine as kundalini, which translates to “coiled snake” in Sanskrit, it’s easy to jump to conclusions.

The Bible has its unique way of describing the energy centers. In 2 Timothy 1:7, the verse refers to the Spirit as the giver of wisdom and revelation: “For the Spirit God gave us does not make us timid, but gives us power, love, and self-discipline.”

Self-discipline here equates to a sound mind, which the first and second energy centers represent: pituitary (wisdom) and pineal (revelation).

The third energy center represents communication, the importance of which is described by Psalm 133:1: “How good and pleasant it is when God’s people live together in unity!”

Finally, the sixth energy center represents a deeper kind of sexuality through fruitfulness and creativity, while the seventh one points to rootedness to the earth that leads to an abundant life.

John 10:10 refers to these final two energy centers: “The thief comes only to steal and kill and destroy; I have come that they may have life, and have it to the full.”

To summarize the seven chakra points and what they represent according to the Bible, here’s a simple recap:

What religion believes in chakras?

I know it seems like a long shot for some, finding ways to connect the dots this way.

While many will still disagree that Hinduism and Christianity may be telling us the same thing (and probably all other religions, whether traditional or not), I can’t shake these references with all the obvious, parallel meanings.

At the end of the day, it’s not really about which way is better, but what those traditions are saying about connecting to Source energy for living a balanced life.

I have to admit, it’s hard to argue with something as beautiful as that.