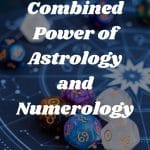 Anyone who deals with mystical and spiritual stuff knows about astrology and numerology. These two ancient practices have been used for thousands of years as a way to predict the future and understand certain events and certain people.

We all know that astrology and numerology are different; astrology looks at the movements and positions of celestial bodies, while numerology focuses on the mystical significance of numbers.

As two very different magical practices, many people assume that numerology and astrology have nothing to do with one another. However, if we look at and consider them together, we can see that they intertwine beautifully, offering support and a foundation for the other.

The science of astrology is known to have been in use as far back as the 2nd millennium BCE. It has taken root worldwide, with many cultural traditions intertwining the practice into their traditions.

Some cultures even consider astrology to be a scientific study, with only the most intelligent and well-studied scholars able to understand it. These scientists use complex mathematics to create birth charts, calculating angles, degrees, signs, and more, all within a 360-degree circle.

Astrology believes that there is a divine connection between the movements of celestial bodies and the events of humanity. Each individual life can be chartered by considering the sun, moon, and stars’ planetary positions at their birth.

Numerology has also been studied and used for thousands of years. It dates back to 500 BC at the latest, when Pythagoras discovered the relation between music notes and numbers.

The study of numerology looks at a divine connection between human events and numbers. Numerologists consider one’s life and the numbers that are connected to them to decipher a path for them.

Those who believe in numerology make connections between the numbers in their life and their current state of being and choices. They also believe that numbers can help determine future events and give them the wisdom to make decisions to either propel or repel those events.

Numerology calculations are more simple than those of astrology. They typically involve the person’s date of birth and name, as well as other numbers that appear on occasion in their life.

The belief behind numerology is that every number gives off a certain energy or vibration that affects each person’s personality, successes, and their overall path in life.

Historically, both practices were intertwined, as ancient mathematics recognized the connection between the two. However, as often happens, time passes by and special things are forgotten.

Pythagoras himself used both astrology and numerology, linking the stars with numbers. His years of studies led him to discover that there was a very deep connection between the two.

Through his work, Pythagoras discovered the numbers, planets, and stars had deep meanings that were intertwined with one another.

A Cohesive Connection Between Astrology and Numerology

While both numerology and astrology are very different, at their core they stem from the same foundation; mathematics. The math involved in charting and understanding both practices is extensive, and neither one would exist in today’s world without math.

Astrology needs mathematics in order to be understood. Calculations must be done to discover the positions of celestial bodies, their degrees and angles.

Without numbers and calculations, there is no astrology. Understanding and analyzing the celestial bodies requires angles, drafting, planetary positions at certain times, and more.

Math is so ingrained in the science of astrology that oftentimes we fail to realize it. We look up at the sky and see the stars, the constellations, the planets, the moon, and we take it all for granted.

However, the entire basis of the science is numbers, is math. This creates a cohesive thread between astrology and numerology, that, when taken together, can actually make both mystical practices much stronger and more powerful.

Numerologists do not need to fully understand astrology in order to perform a reading, however, with a basic knowledge of the influences of the planets, they can increase the power of their reading. The numbers 0-9 are all ruled by the sun, moon, or a planet, and each sign of the Zodiac correlates to a number.

The influence of each planet connects with the vibrations and energy of each number, creating a more in-depth personality and life path for people. So, when numerology and astrology are used together cohesively, they create a seamless, interwoven connection that gives greater insight.

If you take the time to compare a reading of numerology with an astrology reading for a person or event, you will notice the connection between the two. Oftentimes, they flow together so seamlessly that it’s almost impossible to imagine them not being read together.

When astrology is used with numerology, the meaning, depth, power, and energy is increased exponentially. So, instead of choosing one or the other, embrace both practices as a complete, full-circle, way to uncover the truth.