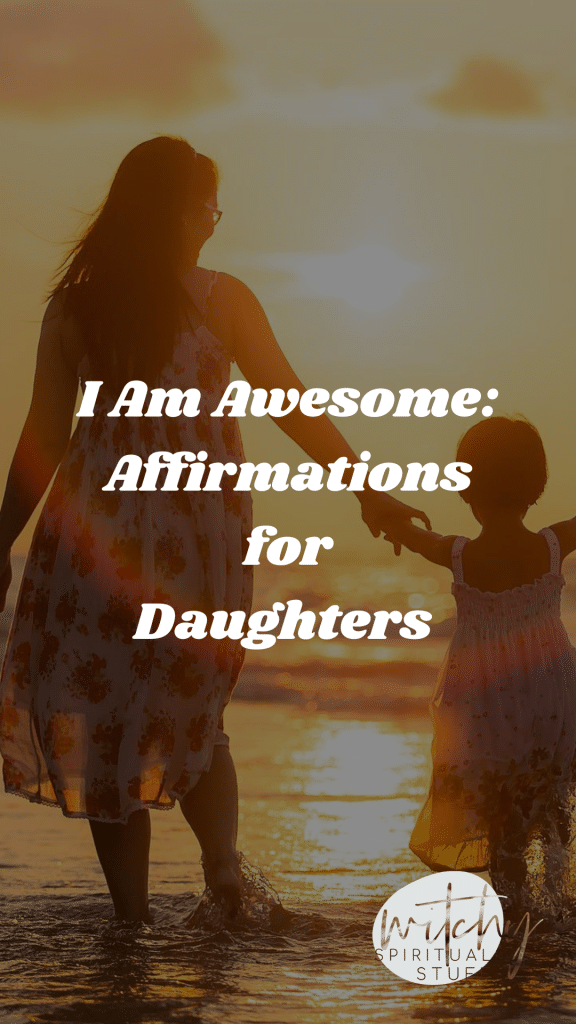 Affirmations for daughters are in high demand right now. And for good reason.

That was my response when people asked me whether I was hoping for a boy or a girl while pregnant. Both times.

None of this, “as long as its happy and healthy” nonsense you hear so often.

As a throwback feminist who read Virginia Woolf and Simone de Beauvoir in graduate school, I knew I wanted to carry, bear, and raise strong, powerful women into this world.

So yes, we need affirmations for the daughters of the world. And we need powerful action to back those affirmations up.

In the beginning, there was a woman.

That’s it. That’s how the creation story should begin.

Nothing can come into physical creation without a woman. Nothing.

It is hilarious to me that we refer to God in western society as a male, Him, when no man can create life.

Man does not create.

It is the female who creates.  How about that for affirmations for daughters?

So, if we are going to refer to Source Energy with a pronoun, which I am not in favor of, it should absolutely and without question be with a female pronoun.

When we women are in our divine feminine space, truly matriarchal, we are at our best, and societies under matriarchies, balanced matriarchies that is, function better than those under even the most powerful patriarchies.

History and nature have shown that matriarchies, when balanced with male and female contributions, are inclusive, communal, collective, and nurturing.

With the female energy in the lead, we open our arms, we embrace, we are curious, we stand in our power, we welcome and receive love, and we make time for rest and for pleasure.

With the male energy in the lead, the emphasis is on aggression, force, protection, exclusion, fear, and insisting.

Even at its most balanced, a benevolent patriarchy tends toward the “do as I say” rule of law, a closed, oppressive system that acts in our “best interests.”

I use the terms balanced and unbalanced because there is a distinct difference between the two.

The unbalanced female is vicious, manipulative, controlling, and devouring. She is Mother Gothel from Tangled, keeping her children locked up in the tower chanting “mother knows best,” working overtime to silence her children’s inner voices and replacing them with her voice.

In nature, male and female function best with the balanced female in the lead and a loving, strong, supportive male lifting her up. Yin and yang.

Not alpha and beta. Alpha and alpha.

We have grossly misinterpreted the meaning of the alpha in our society.

I love hearing men like Jocko Willink speak on this issue.

5’11’ and weighing in at 230 pounds of pure muscle, Willink was a Navy Seal and led his team during some of the most triumphant battles during the Iraq War.

He reminds people who assume he is an overaggressive, highly competitive, meat head that a true alpha is the leader in the pack who ensures every member of his team eats first, who encourages and brings out the best in his team.

I remember hearing a story of Stephen Amell, the actor who played the comic book character Green Arrow on the CW network for several seasons.

Amell became well known for being a classic badass fighter on television and participated in several challenging obstacle courses on competition shows like American Ninja Warrior.

At a sports event one night as he was walking out with friends and family, a random stranger ran up to him, head butted him, and shouted, “I want to fight the Green Arrow!”

Amell, bleeding from his head, collected himself, and said to the guy, calmly and firmly, “Sir, I am not the Green Arrow. My name is Stephen Amell. I play a character on television. I am with my friends and family. I am not going to fight you.”

And we often get confused that alphas are only males.

But in nature, like with wolves, and in the best marriages throughout history, both male and female are alphas.

One leads from the front, and the other protects from behind.

One hunts and the other feeds.

One works outside the home and the other cares for the domestic duties.

We have lost all sense of the alpha female in our society and instead replaced her with an unbalanced version of her. A shadow. A man dressed in women’s clothing essentially.

She is Hillary Clinton. She is Queen Elizabeth. She is Gloria Steinem.

She is fighting for women to be just like men.

And I don’t blame these women. They work with what they’ve got. They learned from experience and from years of oppression and failure that the only way to be successful is to be like men, to compete with men, to be cold, calculating, and reject our femininity.

But what happens to a society that loses its femininity?

Girls are oversexualized, objectified, and take on masculine traits in order to succeed.

Children are left to their own devices, with both male and female outside of the home, competing with each other, and losing balance at increasing rates.

The true alpha female stands in her own power, owns her femininity, and thrives from a balanced space.

How do we get our daughters back to that space?

First, before we think about affirmations for daughters, we must model.

As men and women, we must model the balanced traits within and then offer words of affirmation to those traits.

Women must honor their divine feminine by softening, going lightly, nurturing, opening up, seeking pleasure, receiving honor and pleasure, and stepping into our creative spaces.

Men must honor their divine masculine by providing, protecting, offering, and developing strength and grit to persevere, to honor his inner being, his family, and his community.

And both must honor the other sides of themselves as well.

Women must be able to work with their masculine side, the side that keeps them productive and strong.

Men must be able to honor their feminine side, the side that keeps them open and soft.

And we must hold that balance, checking in with it every day.

Author and Spiritual Guru Rebecca Campbell notes in her book Rise Sister Rise that we women born into this time were born here for a reason.

We entered the Age of Aquarius back in 2012, and we have been shifting into this more female, more curious, more open space ever since.

It is time for the rise of the feminine, a side of ourselves, both individually and collectively, that we have ignored for far too long.

And while it may seem like dark times for women politically, the truth, the good thing, is that we are made stronger by dark times.

We are reminded of who we are, how strong we are, and just what we are capable of.

And change, real revolution, begins in the home.

So the most positive way for us to prepare our daughters for the lives ahead of them is to model and then follow that modeling up with powerful affirmations.

We connect to our divine spirit, we stand strong in our femininity, and we raise our expectations on our men, and our daughters develop a positive self-image and grow up as self-sufficient kids.

When we sit in meditation every day, we connect with the Universe, and we allow infinite power to flow into and through us.

Then, throughout the day, you are more capable of functioning from clean and cleared chakras, honoring your feminine, and channeling divine wisdom.

Wisdom you can pass down to your daughters.

Affirmation for Daughters: The Universe Has My Back

Stand In Your Feminine

When you stand in your feminine, the whole world stops and stares. It is shocking and awe inspiring to see a truly balanced, empowered female.

Affirmation for Daughters: I am at my best when I am in my feminine.

One of the greatest gifts we can give ourselves, our men, and our daughters is to hold men to higher standards.

We have raised generations of men to believe that they are not necessary anymore in our lives, that their masculinity is toxic, and that their emotions are shameful.

We must honor our men’s masculine traits while also creating space for them to have feelings. We must expect them to be providers, protectors, and producers, while also expecting them to uplift us and honor our femininity.

When we do this with the men in our lives, our daughters watch us, and they are empowered to do the same.

Affirmation for Daughters: Men must be held to higher standards.