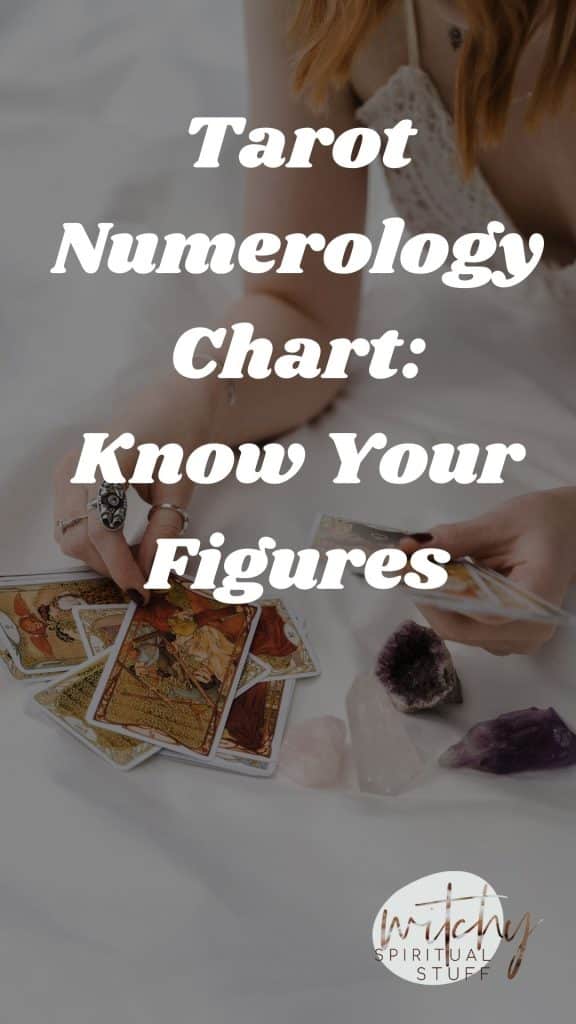 For most people, tarot is just a silly game to play at Halloween, and that is how it has been throughout history.

But for many of us, tarot is a way to communicate with the divine, called a divination tool, and we take it fairly seriously – as seriously as we should be taking anything in this temporary thing we call human existence.

To understand tarot, it is helpful to know its history and have at least a cursory understanding of the tarot numerology chart.

A History of Tarot

I cover the topic of tarot extensively in several other posts, but in this article, we will dive a bit deeper for a more intense understanding.

This understanding will be particularly useful for those interested in mastering tarot and even those going on to work with tarot for others.

In the beginning, sometime in the 15th century, tarot cards were designed in Italy as yet another type of playing card.

Because the printing press was not yet in existence, playing cards were hand-painted, and as such purchased only by the wealthiest families who had money and time to spend as they liked.

The tarot deck is a spin on the traditional 52-card deck, with an extra 26 cards to boot. Like a traditional deck, it has four suits, but it adds in trump cards and even pips.

Originally, tarot cards were called “tarocchi” cards, and for the first couple hundred years of their existence, they remained a novelty simply for play.

Then, in 1791, a Frenchman named Jean-Baptiste Alliette designed and published his own set of tarot cards, along with a guide, and he ascribed to each card a divine meaning, a message from the universe.

He noted that he drew heavily from the Book of Thoth, an ancient Egyptian text said to have been written by Thoth, the Egyptian god of wisdom.

In his guide, he incorporates beliefs about astronomy and the four elements.

Alliette, who gave himself the pseudonym Etteilla (his name spelled backward), became the first known tarot card reader in history.

The Rider-Waite deck has become so popular likely because of the intricacy of the scenes and how well the cards tell a story when pulled together.

Before you can expect to communicate with the divine – call it God, the universe, spirit, source – you must believe that you can.

You must know, deep inside of you that you come from an infinitely wise, infinitely loving universe that has nothing but your best interests in mind (so to speak).

You must know that this universe, of which you are an unkillable, indestructible part, having taken human form only temporarily, is constantly in communication with you.

It is then up to you to stop blocking that communication.

In short: God is always talking to you. You are rarely if ever, listening.

Or, as author and speaker Gabrielle Bernstein says, “the universe has your back.”

Now, once you accept all of that, working with and understanding tarot, or any divination tool, becomes simple.

Indeed, anything can be a divination tool.

A basic 52 card deck can be a divination tool.

All you have to do is decide upon the question and the form of communication.

But let’s get back to tarot.

The nice thing about learning to interpret tarot is that the cards and the messages are fairly universal and are connected to other more esoteric aspects of spirituality and metaphysics.

They go hand in hand.

Thus, if you are someone interested in witchcraft, spiritual practice, deep transformation, and awakening to your higher self, none of the study and learning you do is wasted. It’s all connected.

The first lesson people usually learn is about the four suits.

The Four Suits of Tarot

Cups are emotional cards. They relate to how you are feeling, how you are managing your emotions, and how you can channel those feelings.

Cups are most closely related to the water element.

Sword cards are intellectual. These cards bring up your thinking mind, your practicality, and your need for, or lack of, logic. They can guide us toward what to embrace and what to let go of.

Swords are connected to the air element.

Pentacles are physical and material. Often, they focus on material wealth. I like to think of coins when I see pentacles as the connection is obvious.

Pentacles are symbols of the earth element.

Wands are inspiration, ethereal, spiritual. They reflect your personal connection to, or pinching off from, divine communication and therefore your creativity.

Wands are related to the fire element.

Once you understand the basic messaging behind the suits, you can begin to learn about the numbers within each suit.

Ones show up in tarot as Aces. The first card in the suit, the one, or Ace, is the magician’s number. It represents new beginnings and refers always to the self. Think of an Ace as a seed, an idea, a first step in your journey, as it relates more specifically to the suit.

Twos are self-awareness cards. They represent duality, polarity, and balance. Two is the High Priestess’s number, and she has a foot in both worlds, material and spiritual. She is self-aware and emotionally intelligent. When you see a two, you may be in doubt, vacillating, or wavering, and this card asks you to find balance and make a choice or rise above the need to choose.

Threes are creative cards, belonging to the Empress. They speak to birth, fertility, chaos, and growth. Three energy calls you to expand and take risks and give in to your desires. Surrender.

Four is a stable number in tarot. The Emperor’s number, it brings authority and organization, order, the opposite of three. It calls you to pay attention to the four corners of the world, the four elements, and find your ground.

Fives are lesson cards. The Hierophant’s number, it is for learning, adapting, and being flexible. Fives are on the move and ready to learn as you go.

Six is the Lover’s number. Charity, harmony, beauty, and radiance. Think of it as three, doubled. Sixes are communal and inclusive, reaching out to others and welcoming them.

Seven is a discipline card. It speaks to the work of forward movement, having patience, staying the course, and having willpower. It connects the material world to the divine through persistence and faith. Seven is the number of the Chariot.

Eight is Strength’s number, exuding kindness and compassion along with eternity. It is the most powerful yin number, asking us to take responsibility for our God given power and work with it.

The most introspective of the yang numbers, nine is the Hermit’s number. It is concerned with going within, seeking your higher self so that you may serve the highest good. Stay present and grow wisdom.

The final number in the suit, ten is the number of the Wheel. It speaks to closing cycles and new beginnings. It contains the seed of one and the void of zero, through which we all must pass. With ten, we are asked to let go and let God as we reap what we have sown.

The Page is the beginning of the court cards, so very childlike and joyful, not quite filled with responsibility, but able to inherit it. It is an invitation to wander and let go of the seriousness we impose on life.

The Knight is strong, smart, and in their prime. The Knights of each suit are on a horse and on a mission. Supercharged with energy, pay attention to the other cards you pull, and which suit this one belongs to so you can better understand your mission.

Queen cards represent the full embodiment of femininity. She represents our feelings, emotions, and nurturing abilities. Chaos, creativity, and fertility abound here. Queen cards amplify the feminine sentiment of the suit in which they sit.

Conversely, then, the King card represents all things masculine. Order, reason, and a commanding presence, Kings want to make a difference and have an impact as a leader.

In the end, be sure to note which suit each card comes from, apply all messages within the card to the number, and put it into context with the other cards you pull to understand fully what the message for you is.

And don’t forget to feel your way through it all. It is a practice, a craft to be honed. Don’t take it all too seriously. The universe, after all, always has your back.