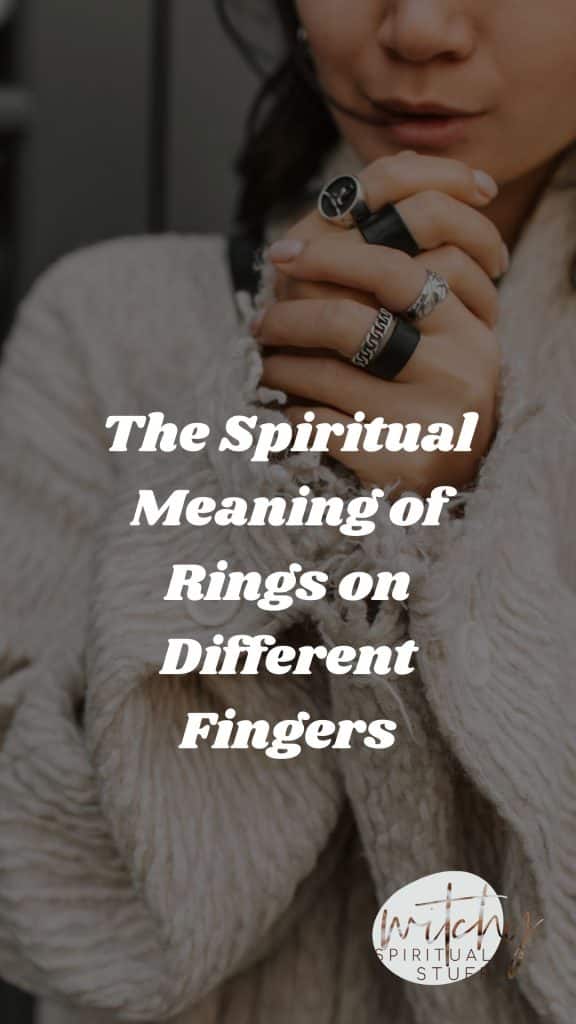 The spiritual meaning of rings on different fingers is largely based on thousands of years of human history and belief.

As with chakras, crystals, and any other symbolism, we create something in our civilizations and then it is passed down through our collective consciousness, taking on meaning as more and more people give it power.

The spiritual meaning of rings on fingers is no different.

It is important to understand as humans that all of the power on earth resides in us.

We are the only living beings on the planet with a will and a consciousness.

Animals, plants, and other life forms have energy, and they have their own types of consciousness in relation to our shared universal consciousness, but they are not sitting around pondering the meaning of life, they are not telling stories about the things that do or do not happen, and they are not living in the past and the future they way humans do.

We are unique on this planet, and we manifest in ways that others do not.

I begin this article on the spiritual meaning of rings on different fingers so you know this information is not willy nilly, made up silly witchy stuff to be taken lightly.

The power we give things is very real and lasting.

We humans are on the leading edge of an evolution of consciousness that has been expanding and progressing from the very beginning of time.

In the beginning, there was only consciousness, only energy.

And that consciousness had the power to create, to manifest, with thought and will.

Life on earth began as microbes, then fungi, then other plants, then animals, and finally, billions of years later, human.

We humans are brand new on the scene, only having been here for a few hundred thousand years.

And our ancestors, the first to walk on two legs and be humanlike, are only 5 to 7 million years old.

That’s a blip on earth’s radar.

And when we say “God created man,” the truth is that this energy, this consciousness, is an all seeing, all present, all powerful energy that puts creation into motion through will and thought and we humans are the latest result of that motion.

We have that same power to manifest matter and reality from thought and will, unlike any other life form we know of.

You’ve heard the expression “those who don’t learn from history are doomed to repeat it?”

Abraham Hicks says the reverse is true. Those of us who learn history are doomed to repeat it.

Because we solidify stories in our minds and then play them out over and over.

We learn of pain and oppression, war and strife, suffering and sadness, and so we accept them as our realities.

Then, without realizing it, we play those realities out over and over again in an endless cycle of mindless playback.

Repeated Cycles Create Realities and Make Meaning from Nothing

What does all of this have to do with the spiritual meaning of rings on different fingers?

Cellular biologist Bruce Lipton shows evidence that humans are born into this world with a subconscious that is essentially on record for the first seven years of our lives.

We watch what our parents do, what our teachers do, we listen to what our influencers tells us, and then we spend the rest of our lives living out those realities, with our subconscious on playback.

We create our reality with our will and our thought, but we are largely doing so on autopilot, which is how our subconscious manages most of the functions of our lives.

Every single thing in our lives is here because we have created it, manifested it, attracted it, or welcomed it as truth, as real.

You can create a different reality, but it takes work.

And the reality that you are living is likely a reality handed down from your parents and your closest village, the primary influences in your life.

And those people were playing out the realities handed down from their parents and villages, and so on and so forth back for thousands of years.

This process is the same one that makes symbolism and mythology and archetypes so powerful in our lives.

Thousands of years ago, societies decided that certain crystals had power.

Thousands of years ago, spiritualities decided upon an energetic chakra system.

Thousands of years ago, gods were created in the image of man.

And those stories, those symbols, those rocks, hold truth today because we created those realities and handed them down over and over again.

They become even stronger than mere beliefs.

And when we know something to be true, it is true.

We see this play out in the world every single day.

Two people born under similar circumstances, even in the same household, can have dramatically different lives based solely on their beliefs and knowledge about the world.

One person can say “the world is a terrible place,” and every experience they have will support this belief.

Bad things continue to happen to them, people take advantage of them, the news constantly tells them how horrible things are, and they find others who feel the same and reinforce this belief.

Another person will say “the world is a beautiful place,” and they seem to others to have been born under a lucky star.

Now imagine generation after generation creating realities like this, handing down knowledge and shaping our world based on those beliefs.

That’s who we get to the real power behind our symbolism and things like the spiritual meaning of rings on different fingers.

The Spiritual Meaning of Rings on Different Fingers

Now, having said all of that, we can look at the various fingers and what having a ring on that finger means on a spiritual level.

The Ring Finger on the Left Hand

The first and most obvious is the ring finger on the left hand, which is the traditional wedding band finger.

A ring on this finger symbolizes a spiritual commitment to another physical being on earth because the ring finger on your left hand has a vein that runs from the finger directly to your heart.

The index finger is associated with the planet Jupiter, named for the Roman god of gods, and is a symbol of leadership.

Wearing a ring on this finger speaks to your ability to manage a group, lead others, and wield your power with grace and humility.

Wearing a ring on your thumb is another sign of power as it takes times and effort to create a ring that will fit the thumb.

It makes you stand out as strong and powerful because the thumb is the thickest and most able to withstand pressure.

It also sets us apart on earth as higher, more evolved beings.

The Saturn line ends on our middle finger, so wearing a ring here speaks to our maturity, self discipline, and commitment to our stewardship of the earth.

Mercury line ends on our pinky finger, so wearing a ring here would relate to our ability to communicate. It is also a feminine symbol, related to Venus, which represents the goddess of love.

Of course, you can dive deeper into rings on different fingers and their meanings based on the type of metal your ring is made from and the gems you place on those rings.

I wear a rose gold ring with crystallized flowers all around it on the index finger of my left hand as a symbol of my leadership roles both in my family and in my community as the organizer of a homeschool group.

I also wear a thick silver band with clear crystals on the middle finger of my right hand to speak to my commitment to care for myself and the earth I am connected to.

All of this, of course, is open to interpretation and translation and can be used in any way that speaks to you.

Remember always that you have the power to accept reality or shape it to your own will.