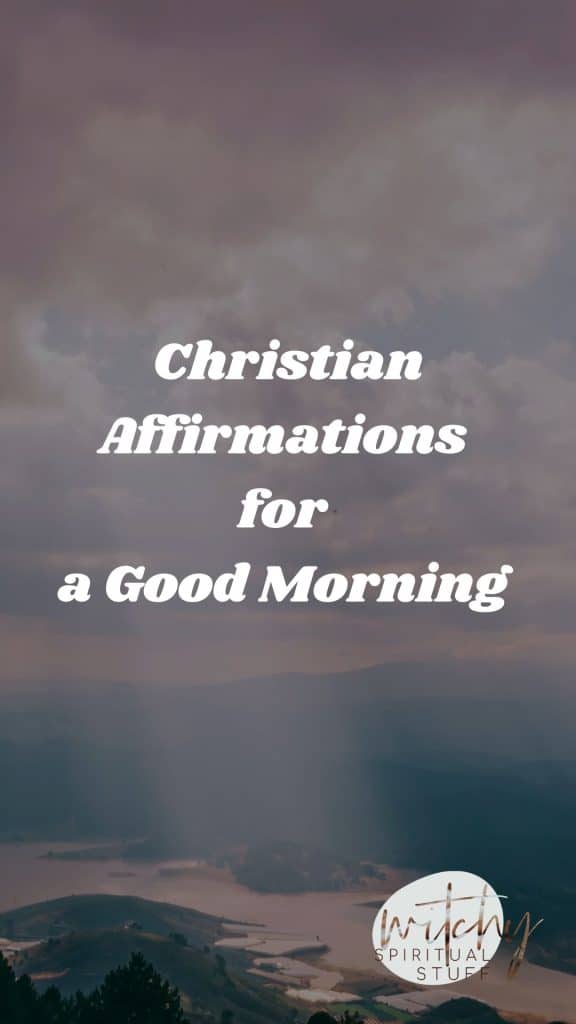 Why would you come to a witchy spiritual site for Christian affirmations?

This might be the best place for Christian affirmations!

Everyone just assumes because I’m a witch with a witchy website that I am not a Christian.

In fact, I’m not affiliated with any organized religion at all.

I went to a chiropractor recently for a consultation and explained to him when he asked me about my health practices and spirituality that I am a naturopathic, herbalist, ayurvedic witch.

“Oh, yea! A Wiccan? Right?” He asked, excited to connect with me on something with which he was familiar.

“No. Not a Wiccan. A witch. I don’t belong to a religion.” I responded, calmly.

Of course she’s not a Christian.

Well, neither assumption is entirely accurate.

While I am not a Wiccan or a Christian, I am a practicing witch who greatly admires the life and times of Jesus Christ.

I have read the Christian Bible extensively, and I study it frequently.

I also have my own “religious” practices in place that make me somewhat religious, except that I don’t belong to an organized religion, or any religion at all.

But remember, the word religious simply means something you do with devotion on a regular basis.

I also have many practicing Christian friends with whom I am very close, and we discuss Jesus and the bible on a regular basis.

Christianity is difficult to escape from, as it is a primary foundation of the western world.

So most of us who live here and consider the west an inherent part of our culture would do well to understand the basic tenets of the religion and how those tenets relate to our everyday lives, whether we realize it or not.

Christian Affirmations: Christianity and the West

Here’s how it happened:

For thousands of years, civilizations created religions around nature, around the experiences they had, and around their own mythological belief systems.

Egyptians had gods who were all seeing and all knowing, gods who created and empowered the sun, gods who ruled the underworld and the afterlife.

So, too, did the Chinese.

And in the “west,” the Greeks had their own gods who ruled different aspects of life.

For millennia, the gods had human characteristics; they were jealous and angry, fickle and uncaring, capricious and powerful. Like giant children with more power than they knew what to do with.

Under those gods, the Greeks formed a senate, a form of democracy unlike any other that we know of on earth. For the first time, a government is formed that includes the voices of “the people.”

Never mind that “the people” included only wealthy landowning men.

When the Romans conquered the Greeks and took over the entire western world, ruling a Roman Empire for hundreds of years, they adopted the Greek gods, merely changing their names.

Under their gods, the Romans carried on with Greek ideas of democracy and instituted a new form of government called a republic. In this republic, representatives from different areas of the empire would be heard by their leaders and decisions would be made based on consensus.

Meanwhile, the Hebrews in the land of Israel, in the east, were one of the few religions that believed in a single divine creator, Yahweh.

The Hebrew religion tells of a divine creator who is all knowing, all seeing, and all powerful.

At the same time, he is vengeful, jealous, and wrathful.

He was much like the gods of other religions except the he encompassed them all.

It makes sense, when you think about it, that all of these descriptions of gods would have the same characteristics, as ancient civilizations needed to explain the fickle characteristics of life.

So, the religions came up with concepts of good and bad, of punishment and reward.

Moses, from the Hebrews, came along and wandered through the desert for several weeks, leading his people out of slavery in Egypt.

One day, he had a vision that an angel of Yahweh spoke to him and gave him a set of rules to live by for his people.

That set of rules is what we now know of as the ten commandments. They are very basic.

Be good, do good, be kind to each other, don’t lie or steal or murder. Pretty simple.

Those rules became a set of law by which to live for the Hebrews.

All of these diverse religions and forms of government come to a head when a man named Jesus, from a land of Nazareth, a Hebrew born in the Roman empire, began preaching about love.

He was a devout Jewish man who told anyone who would listen that the Hebrew god, Yahweh, was a loving, patient, kind god who would accept anyone into his embrace who practiced a loving life.

The leaders of both the Hebrews and the Romans hated Jesus for what they saw as a challenge to their status quo, and they both conspired to have him killed.

Jesus’ message had already spread far and wide to the point that his crucifixion, punishment for speaking out against Roman government corruption, martyred him.

He became a god in the eyes of his followers, and an entire religion was formed around his preachings.

Because Jesus was Jewish, his followers incorporated the Torah, the Jewish Bible, into the story of the life and times of Jesus into a single book.

Thus, the Torah became the Old Testament of the Holy Bible, and Jesus’ life became the New Testament.

For hundreds of years after his death, the west grappled with Christianity, figuring out how to incorporate it into their laws and systems.

The corrupt leaders knew it was not going away, so they twisted Christianity in ways that made them more powerful, that made women subservient, and that created class systems and supported racism and slavery.

But still, the word of Jesus shone through and gave hope to millions.

Today, the western world relies on elements of Christianity to support democracy, social justice, forgiveness, punishment, discipline, a system of laws, and more.

We are who we are as a people largely thanks to Christian influence.

What does all of this history have to do with witchy spirituality?

Well, I think Jesus got a lot of what he was preaching right.

We have to always keep in context who is saying what and when.

Jesus lived in a time of great ignorance, and of great power for corrupt systems, and still, he preached unconditional love.

He was well educated and well-traveled by all accounts, and, thanks in large part to intense researchers, like Megan Watterson of Mary Magdalene Revealed, we know Jesus was also likely married, and perhaps had children.

He was a kind, loving man who tried to tell the world that God was so much more than we realized.

In a time absent of science and lacking in reason, Jesus spread the word of a creator who was pure loving energy, and of our own innate human ability to do great and powerful things in this lifetime under the loving gaze of that god.

In short, god’s word is love. The bible verses we read are steeped in metaphor that all comes back to doing good work with your life.

The biblical truth we can take from the holy spirit, God, is that we are all christ jesus, each of us is a child of god, and we are all here to do as many wonderful things, if not more, as Jesus himself, and Mary Magdalene, did.

We don’t have to be Christian to believe in any of this. But we can take great hope and find intense faith in a religious text and teachings that have lasted for thousands of years.

God’s grace is with us at all times, god’s love is always available to us, whether you call Him/Her/It god, God, the Universe, or just nature.

So, you can begin every morning with daily affirmations that recognize your eternal life, your own strength in the power of god and the love of god.

“I am living proof of god’s love.”

“I am grateful to have this day to shine god’s love.”

“I surrender to the will of god.”

“I abandon any spirit of fear.”

“I can do hard things with good courage.”

“I am filled with thoughts of peace.”

“Difficult times are powerful ways to see what my soul finds.”

These powerful affirmations will offer you new pathways to do great things with this one precious life you are living.

Each new life we live is a testament to the way god loves us and the abundant life god’s strength has given us.

The area in which I really diverge from most Christians is in my recognition that we are all gods in human form. We are children of god and examples of god’s perfect love.

It is sacrilegious, of course. But I’m a witch. What am I worried about?