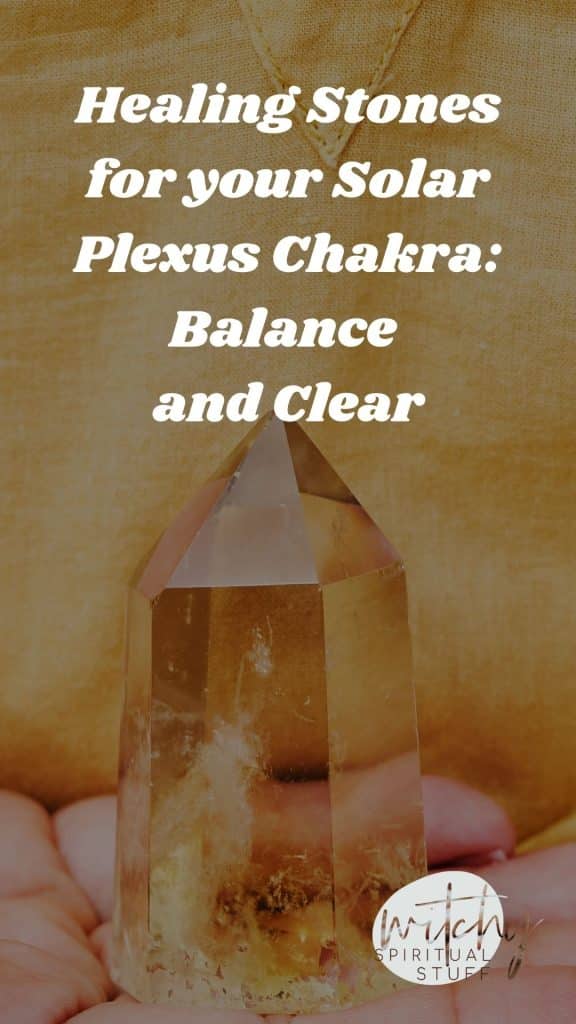 The Solar Plexus Chakra, also called the Manipura (or “City of Jewels”) in Sanskrit. It is the third chakra out of the seven main chakras, following the root chakra (found in the base of your spine) and the sacral chakra (found below the belly button).

The solar plexus chakra is located right at the diaphragm, in our upper belly.

It also rules over our guts and digestive system, effectively encompassing our “stored emotions” and “gut feelings”.

With that being said, it is no surprise that keeping the solar plexus chakra unblocked and balanced is extremely important for the flow of motivation and the feeling of purpose throughout our bodies.

A blocked or overactive chakra can lead to a lot of negative effects, such as low self-esteem (blocked), or a desire to control others (overactive). It can also induce physical effects such as liver problems and digestive issues.

Thankfully, there are a lot of ways to heal and balance out our solar plexus chakra and step back into our own personal power. One way is to maintain a healthy habit of yoga or meditation.

Spending time in the sun and trying out some aromatherapy (particularly with Rosemary, Cedarwood, and Lavender) are also great ways to balance out the solar plexus chakra.

Since the solar plexus is represented by the brightness of yellow and the heat of fire, its healing stones tend to be of similar colors.

The first among our many yellow stones, the Yellow Jasper, also known as the “Stone of Protection”, is said to absorb negative energy from its surroundings, especially in times of stress.

Not only that, the Yellow Jasper can also give off positive energy and vibrations, and is said to carry the energies of the sun. It is the perfect confidence-boosting stone, plus it wards off any anxieties and depressive tendencies that might come to visit.

One of the most useful stones for healing, the Yellow Topaz is known for purging and detoxifying blockages not only in the solar plexus chakra, but also in the root and heart chakras.

It’s best used for those long and dramatic healing cycles where so much negative energy has accumulated. Think of it as a necessity for a thorough cleanse.

The Yellow Calcite is an energy amplification stone that helps in clearing out patterns of old energy and brings in the brightness of motivation and confidence.

It is mainly used for those extra busy days when you need that extra burst of positivity and energy to get things done.

A Quartz is usually an all-around crystal in terms of chakra healing, so what better way to solar-plexus-ify the quartz then by getting it in the color yellow?

The Lemon Quartz is another good stone to use for a fresh dose of energy– particularly the fun and bubbly kind. It draws happiness and joy in and keeps worry and dark energy out. It’s best used for those days when you need to stay positive and cheerful about the circumstances, no matter how dire or challenging they may be. Also best used when you’re motivating a group of people.

Amber, also called the “Stone of Healing”, is not necessarily a “cleansing” or “detox” stone like the previous stones on this list.

It’s great power lies in the fact that it is mostly a balancing stone, which makes it perfect for both blocked and overactive solar plexus chakras. It is also focused on healing emotional, physical, and mental ailments that cause the imbalances in the first place, so it’s a relatively more proactive stone than the rest.

Widely known as “Fool’s Gold”, Pyrite is a gleaming golden stone that inspires determination. It is known to keep mood swings at bay and to balance the way we feel our emotions.

While it balances this, it also blocks negative energy to mess up its work on your internal balance. Pyrite is perfect for those long and tedious tasks where you have to remain calm, focusing on the task at hand, and keeping that determination up in order to keep pushing forward.

The red and almost volcanic Agate is another cleansing stone focused on ridding our solar plexus and our minds of emotions that shouldn’t be there anymore.

They are also known for “repurposing” strong and passionate emotions such as anger into some other form of positive movement or energy. If you want a clear and healthy mind, the Agate is perfect for you.

Named after the mighty beast itself, the Tiger’s Eye has been believed to ward off curses and ill wishes. Many say it creates a protective barrier against any external attacks to the chakra system.

Apart from that, the Tiger’s Eye is also known for its huge contribution to the areas of self-confidence and courage. It’s the best stone to use when starting out a new venture, trying out something new, going to a new place, or doing something that scares you.

Finally, we have the Sunstone, which is a great stone to use when recovering from something heavy and scarring. It’s perfect for deep healing, as it inspires clarity of mind while inviting positive feelings of self-esteem, self-worth, and self-confidence to come back and revisit our broken yet healing selves.

It’s a great stone for that “bigger picture” perspective, plus it gives a bonus of shedding light on our unique skills and talents as we heal!

How do you use chakra stones?

There are many ways to utilize said stones to deepen and amplify your solar plexus chakra healing ritual. You can wear these stones on or around you, as in jewelry or keychains.

You can enhance your meditation with the use of these stones by holding them onto where your healing chakra lies– which, in the case of the Solar Plexus, is on the upper abdomen, by the diaphragm. You can crush some crystals to make an elixir in order to drink water infused with them.

You can even just leave them around the house– preferably near the sun for the solar plexus crystals.

There are many various types of uses that can incorporate these energy and healing stones into your daily healing habits– all you have to do is adopt one that feels personal to you to be able to start healing.