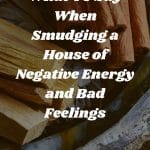 There’s more to a house than the four walls that enclose its livable space. Contrary to popular belief, a house isn’t just a piece of real estate for the highest bidder.

It’s a reservoir of negative energies and memories left by its past owner — both living and deceased. The land can also fill with spiritual energy that can either bless or — knock on wood — it can curse its inhabitants.

So, how do you ensure that the spirits bless you when you move in? What do you do to get rid of the bad juju that might haunt a house? I’ve found that the best way to do this is with smudging.

By smudging, I don’t mean throwing mud on the walls and rubbing them all over — as fun as that might sound. Rather, smudging is actually the process of appeasing or winning the favor of the spirits that still reside in a house.

Am I allowed to smudge my house?

That’s a great question and is highly debated in the spiritual world. But the truth is, smudging is part of a closed practice many Native Americans practice, and if you aren’t a part of that practice, you are better off cleansing your home rather than smudging it.

So maybe skip that sage stick or that white sage bundle, and the abalone shell all together and get your home clear of negative energy without desecrating an ancient practice or killing a bunch of ancient plants. There are better ways to clear negative energy even though this is the most popular way.

Also, and this is very important– try not to use sage or palo santo that hasn’t been ethically sourced. It’s okay to purchase these things for sage smudging if you are supporting a local vendor that’s a part of the practice. That’s a good way to go.

But, if you pick up a white sage smudge stick from Five Below or whatever, be prepared for some bad energy in your living space. And nobody wants negative spirits in their entire home, am I right?

We don’t need those bad vibes. We are all about clear energy.

Like many homeowners in tune with their spiritual side, I’ve smudged my home by burning herbs and incense. However, the appeasing effects of the herbs you burn can only take you so far in winning a spirit over. You need the right prayers and incantations to go with your burning (ethically sourced) sage or cedar.

Are you at a loss for words? Not to worry! Put down the cedar stick and read on as I fill you in on what to say when smudging a house!

First Things First: Your Intentions Determine What To Say When Smudging a House

Think of smudging as your way of communicating with the spirits. In fact, that’s what it’s meant for. Like any situation where you speak to someone, what you say depends on your intentions.

Now, you might be thinking: “Why do my intentions matter? Won’t this be clear to the spirits when I say my incantation or prayer?”

I used to think this way when I got into smudging for the first time. Back then, I was under the impression that all I needed was the right herb and the right prayer. Oh, was I wrong!

Here’s what I’ve learned. Unlike people, spirits can get a handle on what we want — even before we articulate our desires and wishes into words. There’s that saying about our thoughts becoming reality, and spirits do pick up on what’s underneath our words.

Before we go into what to say when smudging a house, let’s keep our intentions consistent with what we say. Besides, doing this gives our petitions the added otherworldly “umph”, wouldn’t you say?

What To Say When You’re New to the House

Whether you’re a guest or just moving in, it’s always common courtesy to bring something. What you bring as an offering must be something positive.

For housewarming, you would usually bring a bottle of wine. If you’re a new homeowner wanting to establish positivity, you would bring:

You’re free to write your prayer or petition out in any way you want. Just keep it respectful to the spirits (like talking to your high school principal) and keep all previously mentioned things in mind.

If you need an example, here’s one to get you and the spirits off on the right foot:

“I (-your name-) am moving as a new dweller into this space. I want to thank you (the spirits) for welcoming me and the spirit of past residents who have built this house with positive energy. In this new home, I will create an environment of love and happiness, in harmony with the spirits in this home.”

Remember that the front door is a great place to start a smudging ceremony. You want all that stagnant energy out of your house on a regular basis, but especially when you first move in. The negative ions are also often felt more strongly in small spaces, so be prepared for that as well.

I often open the doors when I am cleansing just because it makes my physical space feel more open. I like to let the positive energy from the outside flow through so it feels like a new space.

The realtors you spoke to will only give you part of a house’s identity. Sure, they’ll tell you about renovations and its property value on the market — but one thing’s for sure: they probably won’t know much about the house’s energy.

It’s great if all energy is positive. However, that is hardly ever the case. As you light your sage or sweetgrass stick, say a prayer that removes negative energy and invites the positive variety.

What do you say when you smudge a house of negative energy?

Try this with the windows open and with your tone as stern as your intentions:

“I command all low vibrational energy to vacate this space and move in the direction of the light.”

I’ve been told to say something along these lines after I’ve meditated. The explanation I’ve been given is that commands to spirits work better when utter from a clear and grounded mind.

What To Say When Putting Your House Up for Sale

All good things come to an end — including the relationship we have with our home. However, sometimes, it’s time to put a home up for sale. When you’re trying to sell yours, thank the spirits for guarding you and keeping you safe and sheltered.

Besides thanking the spirits, you’ll want to ask for one more thing. Your ties with the house may be ending, but your departure will mean the arrival of a new owner. When selling your home, never forget to ask the spirits to welcome the new family or owner with open arms.

What prayer do you say when smudging?

How? Try saying this as you light up a candle with your choice of herbs:

“I am indebted to the spirits of this home for protecting me and my family. I thank the spirits for allowing me to share this home with them for the years we have been here. I ask that the next family experiences the warm welcome we have been privileged to receive.”

Intentions and Appreciation Create the Petition

At the end of the day, there’s no one way to say your petitions to the spirits of a house. After all, there’s more to your experience of a house than moving in and selling it.

Also, remember to move in a clockwise direction from when you take that very first step to start the cleansing. It’s also okay to just imagine a white light or even use a flashlight as a light source to cleanse with. This isn’t prehistoric times and some involved ancient ceremony to get your entire house rid of unwanted energy.

By showing appreciation and being clear with what you wish to have, the spirits can be guided. Also, they’ll be able to help you regardless of what you want to have in your house — whether that’s more love, productivity, or happiness.

Show appreciation, and state your intentions as they resonate within you. Do these two things, and you’ll find good vibes and good fortune with the spirits on your side as you smudge the house.