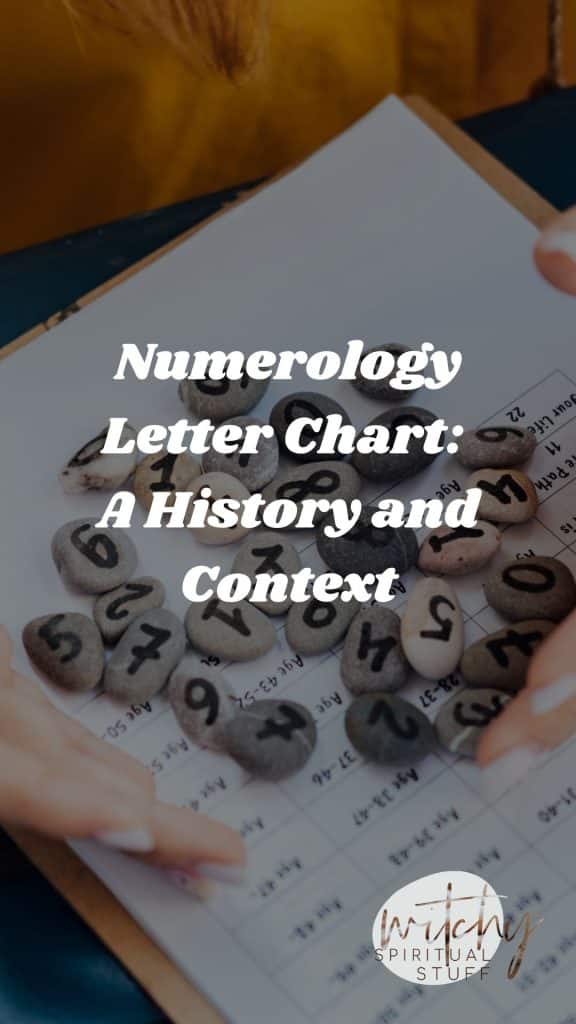 The root of astrology, understanding people based on their divinity, and translating universal symbols into people’s personalities is found in numerology.

How we understand all divination tools really has its home in numerology.

But what is numerology? And how can we use the numerology letter chart?

The history of numerology dates back to at least 500 BC, when Pythagoras, a Greek philosopher and mathematician posited that there was a link between music and people’s personalities.

From there, he noted what he referred to as the intelligent design of the universe.

Clearly, Pythagoras was on to something.

And he found the common denominator in much of the natural patterns and beauty was math.

Numbers were a source of extreme fascination – bordering on the obsessive – for Pythagoras, so he travelled to Egypt to study Chaldean numerology. He remained in Africa for 22 years, finding in his studies that everything in nature could be transformed and interpreted numerically.

From him, we adopted the theory of allocating numbers to nature, and from there we arrived at what we now know as numerology.

In line with Pythagoras’ theory, Chaldean numerology is an ancient practice of using numbers to interpret the universe. The theory goes that the universe is built on energy, and energy communicates through vibrations.

As we know from Albert Einstein and the physicists and quantum physicists who proceeded him, everything is indeed energetic and always in motion, even if we cannot see it.

So, clearly, the Egyptians and Pythagoras were tapping into accurate information and knowledge that would take science hundreds of years to put into comprehensive language.

It is interesting to note that back then, and even today, we speak of numerology, astrology, tarot, and other tools of divination as if it is mystical, purely metaphysical, and unfounded.

But the logic was there thousands of years ago, and science is catching up.

Chaldean numerology holds that those vibrations speak to our destiny based on our full birth date and legal name.

These concepts have held over into modern day numerology.

Origin, Destiny, and the Higher Self

To understand any of this theory, and to even begin to accept numerology as a legitimate way of understanding our life, our path, and our destiny, a few things have to be understood first.

The first, most basic concept to be grasped is the origin of everything.

The thinking goes that long before there were planets and living organisms, there was Spirit.

From this Energy, the cosmos was created, first the explosion that we call The Big Bang, that created earth, then the evolution of living organisms from fungus to other plant life, to bugs and sea creatures and then land mammals and finally, at the very end of the chronological clock, humans.

That Energy used everything at its disposal to create earth, and all of life on earth was created from that same original stuff, the material of the universe – stardust.

Every single particle of matter, of solid stuff, that is on earth today is made of the same stuff that was here when earth was first created, that was in existence in the cosmos before earth was created.

And all of it, every single minute particle, was created by, and is animated by, that original source Energy, which is still alive, active, and creating today, obviously, because new life is still coming into existence today.

From that logic, then, we can say without doubt that all of life, everything that exists, is connected by the same energy, comes from that energy, and then returns to that energy when life ends.

Energy creates us and animates us.

The biggest mistake most religions make is in separating us from that Energy, making God a creator but not an animator. The truth is that Energy cannot create something and remain separate from it. Science shows us that.

Thus, we are the Energy that created us. We are our own creators, extensions of that energy.

We are the gods we have been seeking.

From there, then, we can begin to understand how destiny works.

Most people, when they discuss destiny, they talk about it as though it is a plan created outside of ourselves for us.

When, if you understand that we are the Energy that created us, then you can see that we created our own destiny.

Here’s how that works:

When we are not in our human form, we are in our all-knowing, all-seeing, all-powerful state. We can see all possibilities, all outcomes, and all opportunities.

When we choose to come into human form, we come with a set of intentions. Before we are human, we decide what kind of experience we want to have.

Why? Based on what?

The Universe, that Energy, is always expanding, and it expands exponentially with each experience we have.

It is a non-judgmental, entirely loving, and neutral force that is merely responding always to our will in human form.

So, imagine you have lived a hundred lifetimes, and when you are in your higher consciousness state, you know all you have done, lived, and learned. Now, when you are choosing to come back to earth in human form, you want to experience something different, learn something new.

From that desire, you will set your intentions.

And from those intentions, you will be born to a certain set of parents, who will make choices, and you will be subject to a certain childhood, with all the joys and traumas that come along with that.

Your destiny, then, is to live out the intentions you set before you came into human form.

Depending on when you are able to access and understand that destiny, you may be miles away from it, or dramatically close to it.

Your job then, to complete your destiny, is to be in communication with your higher self.

Your higher self is the part of you that remains ever connected to Energy, God, Source.

I like to think of it like this: God is the ocean, and your higher consciousness is the ocean in drop form.

A single drop that is always made up entirely of all the same energy as the ocean, just individuated.

If you were born into circumstances that allow you to intuit your higher consciousness, you may have been following the right path you set for yourself from the beginning, with a few minor lapses in judgment and communication along the way.

If you were born into circumstances that have kept you locked into your physical frame, hung up on ego trips and conditioned narratives, you might feel very far from your destiny.

The wonderful thing about your higher consciousness and its state as an extension of the Universe is that once you do tap into it, it is always there for you, and can lead you quite quickly back on track to your destiny.

All you have to do is open up.

A great first step, then, to discovering your destiny is to interpret the message you left for yourself when you set those intentions.

Those intentions ensured you would be born on a certain date, and that you would have a specific name.

Remember, you knew all of this long before you chose to become human.

Tracing yourself back to it using numerology is your first step onto the path you planned for yourself, to learn, to experience, and to thrive and expand with the infinitely loving universe.

The above numerology letter chart is the one laid out by Pythagoras according to Chaldean numerology. With it, you can determine your life path based on your full legal name.

Combine that with your numerology number using your birth date, and you can begin to understand your destiny and move forward opening up lines of communication with your higher self.

Remember to take all of this with a grain of salt.

Meeting and communicating with your higher self should always be your highest goal and priority.

You can seek the help of a numerologist, a psychic, a healer, a priestess, and so on, but in the end, the only truth you can really find must be within yourself.