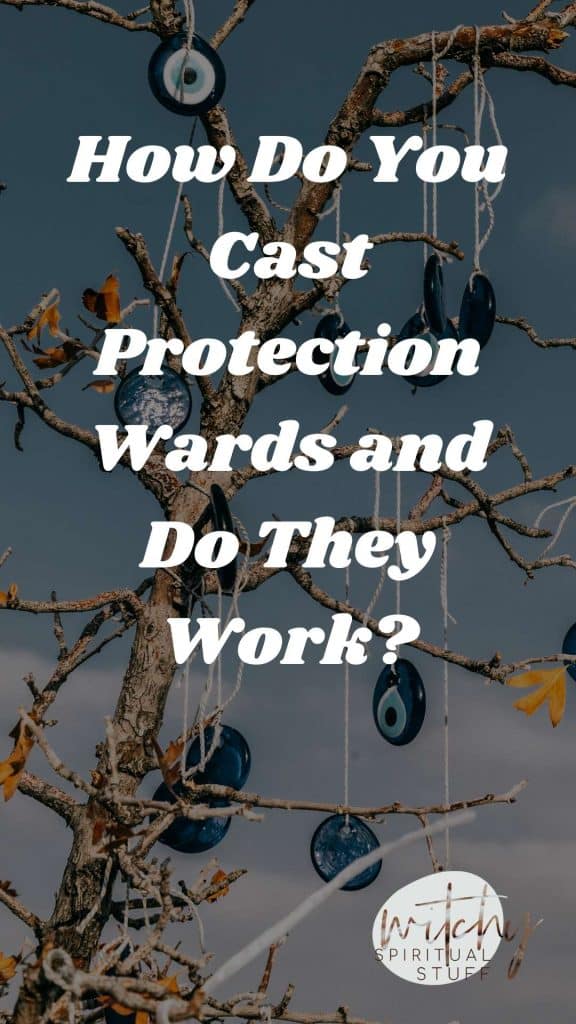 Wards are magical spells to help protect you, your house, and your belongings. They were first found in English witch hunting manuals of the 14th through the 17th centuries during what is known as the Burning Times.

With roots in both European folklore and pre-Christian mythology, spells contained within these books were used by witches and cunning folk during this time period to help protect themselves from those who sought them out, especially during the Reign of Terror.

What is a Protection Ward?

A protection ward is a magical barrier that is used to repel or deflect negative energy or spirits.

Protection wards come in several different forms and can make use of many different materials. Common materials include salt, water, chalk, and crystals. The method of creating the ward will depend on the materials used as well as the purpose of the ward.

For example, if you want to create a permanent ward for your home then you might use salt which can be poured directly onto surfaces such as doorways and windowsills but if you want to make your own personal amulet you can use crystals which may be worn as jewelry or carried inside pockets and purses.

What’s the Best Tool for Me to Use?

Our ancestors used what was easily available to them, but you can use anything that speaks to you.

This can be salt, water, oils, crystals, stones, or whatever else feels meaningful to you!

Where Can I Place a Protection Ward?

The most common places to put a protection ward are doorways, windows, and entrances to rooms.

You can also hang them on the ceiling corners of your home or in places that are considered “shadowy” such as under the bed or inside of a closet. Protection wards are often hung in groups of three (three being a lucky number).

If you live in an apartment block with no doorways, you can still make use of the outside walls.

I like to hang my protection wards all around on the outside walls and underneath any trees nearby.

When hung from cords on trees, they resemble wind chimes which some people find quite appealing visually.

How Should I Prepare My Space?

When you’re about to perform protective magick, cleansing and purifying your space is a great way to get rid of any negative energy. If you have crystals and incense already, that’s fantastic!

But if not, there are plenty of other ways you can use energy to cleanse your space. You can also use prayer or whatever else will help clear out the room.

Once your space has been cleared, set up an altar area with whatever items you want to include in the ritual (more on this in the next section). Then light your candles and let them burn for at least 15 minutes before starting the ritual.

Can I Place a Protection Ward on Myself?

It’s possible to place a ward on any object you carry with you, or even on someone else.

It becomes much more complicated when the object of your spell is yourself, due to the nature of wards and how they work. What some Wiccans do is cast protection spells that require less effort and less complexity than wards, such as simply affirming their positive energy every day.

After all, if you’re carrying around negative baggage from your day-to-day life and interactions with people who are out for themselves, isn’t it a better use of your time to release this negativity rather than try to protect yourself from what may be in the future?

Should I Say Something While Placing the Ward?

While you don’t have to say anything while placing a protection ward, there’s nothing wrong with doing so if you like.

You could choose to recite a standard spell or recitation, or something more personal, such as a prayer or wish. The important thing is to ensure that what you say is specific in two ways: your intention should be clear, and the timeframe of the protection should also be specified.

For instance: “I cast this ward to protect me from my ex-boyfriend’s cursed Chihuahua until we go on vacation together next month.”

Can I Increase the Power of my Protection Ward?

You can increase the strength of your protection wards by placing more than one ward or by combining them with other tools. For example, you can make a ward grid that includes some or all of the following: salt, sage, crystals, amulets, and sigils.

You can also use a combination of these tools as well as protection spells to create as many layers of protection as you like around yourself and your home.

For a simple layer of protection against minor psychic attacks (such as someone sending you bad energy), using a single salt circle outside your front door is usually sufficient.

If you feel like the psychic attacks are coming from inside your home, you can make a salt circle in every room where they are occurring.

This will usually be enough to stop them from happening again—although if they continue, it may be time to take extra steps.

When it comes to warding, there are countless ways to ward yourself and your property.

There are many different ways to cast protection wards and spells.

For example, some practitioners use salt to ward against all kinds of bad energy, while others may lean on a more specific amulet or talisman (a symbol with a particular meaning).

Some of the most common warding tools include crystals, herbs, candles, incense, and incantations.

Like other magical practices, there are endless ways to practice warding. The most important thing is finding what makes you feel safe and protected.

Here are some of my favorite protection wards:

1. Keep a sliver of garlic

4. Keep wolfsbane potions in all windows of the house

We all know how important magic is, and how much it impacts our lives. The more we know about magic, the better off we will be. Knowledge is power.