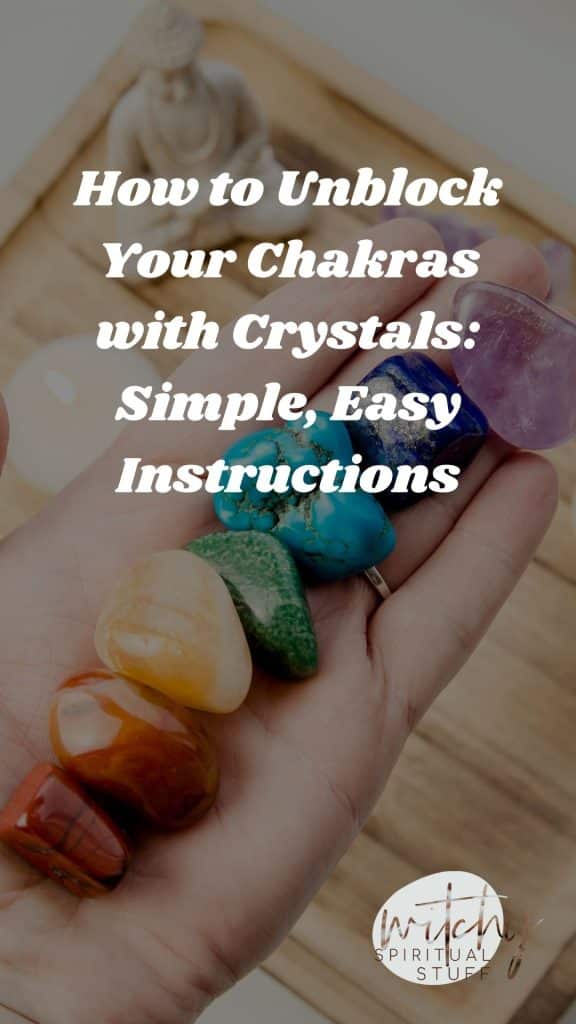 What are Chakras? The word, “Chakra” originates from the Sanskrit language and translates in English to “wheel.”

What that means is that our Chakras operate like wheels that spin to circulate energy throughout our bodies. When fully balanced, our Chakras help center and regulate our energy to help us maintain positive physical, mental, and spiritual health.

Chakras are responsible for multiple factors that influence our overall well-being. They regulate everything from the physical energy associated with our organs and nervous system to our psychological, emotional, and spiritual health.

Unfortunately, however, several factors can block our Chakras. When this happens, our energy becomes unbalanced, and our health can greatly suffer.

Luckily, there are a number of tools and methods we can use to heal blocked Chakras. One of the best methods to heal Chakras is using crystals.

Keeping our Chakras open and fully balanced is key to promoting physical and spiritual harmony throughout the body. But before we can heal our Chakras, we must first understand each of their respective functions.

It is closely associated with the Earth and helps keep your body grounded and connected. As a result, your Root Chakra circulates the energy that deals with safety, security, prosperity, and survival.

The second Chakra is known as the Sacral Chakra. Associated with the color orange, this Chakra sits just below the belly button at the geographic center of your body.

The next Chakra is the Solar Plexus Chakra. The third Chakra sits from the belly button up to the sternum and is represented by the color yellow.

The Solar Plexus Chakra is responsible for the personal relationship you have with yourself and the amount of control you have over your own life. Overall, it represents willpower, self-esteem, motivation, and inner strength.

The fifth Chakra is the Throat Chakra. Represented by light blue, this Chakra sits at the center of the neck and operates as a passage between the energy in the head and lower parts of the body.

The sixth Chakra is the Third Eye Chakra. Represented by the color Indigo, this Chakra sits centrally on your forehead.

It is responsible for your imagination and dreams. In addition, the Third Eye Chakra guides the energy involved with intuition, foresight, and the ability to make judgements and decisions.

The seventh and final main Chakra is the Crown Chakra. This Chakra is geographically located at the top of your head and is represented by the color purple.

The Crown Chakra is responsible for your consciousness and wisdom. In addition, it symbolizes your connection to the divine.

Signs Your Chakras May be Blocked or Overactive

There are a number of signs that one or more of your Chakras may be blocked. In addition, causes to blocked Chakras can range from physical illness to powerful negative emotions.

Each of the seven main Chakras also has its own symptoms that you should look out for to determine a potential block. On the other hand, there are also symptoms for each Chakra that can point to overactivity, which can be just as harmful.

Some of the common symptoms we find when the Root Chakra is out of balance include overwhelming stress and exhaustion. Oftentimes, we can point the cause to an external factor such as financial issues or work instability.

When our Sacral Chakra is out of balance, common symptoms involve difficulty finding meaningful relationships and any type of sexual dysfunction. In addition, we may experience difficulties in our creativity and lose the ability to feel joy.

If our Solar Plexus Chakra becomes blocked, our self-worth can become highly damaged and lead to a feeling of powerlessness over life and yourself. Overactive Solar Plexus Chakras, on the other hand, can leave you feeling overambitious and possessive over the lives of others.

Some of the signs and symptoms of a blocked Heart Chakra include intense feelings of sadness and grief over a past or current relationship. In addition, you can experience physical symptoms such as chest pain, asthma, and allergies.

If your Third Eye Chakra becomes blocked, you’ll experience deep perceptual issues ranging from confusion and dizziness to headaches and blurred vision. In addition, you may find it increasingly difficult to make decisions, and your damaged judgment can make you vulnerable to those with ill intent.

Because the Crown Chakra connects us to divine states of consciousness, a blocked Crown Chakra makes it impossible to reach enlightenment. If your Crown Chakra is blocked, you may experience feelings of insignificance or spiritual abandonment, along with physical symptoms like intense migraines.

The Best Crystals to Heal each Chakra

In general, crystals that share the same color as a specific Chakra work best for healing the respective Chakra. However, there are some exceptions to keep in mind.

For each of the seven main Chakras, I’m going to discuss some of my favorite healing crystals.

For the most part, red and black crystals are ideal for unblocking your Root Chakra. Crystals of these colors are known for their grounding effects, which directly corresponds to the Root Chakra’s function.

Some of the best crystals for unblocking your Root Chakra include Hematite, Black Onyx, Red Jasper, and Red Calcite. In addition, you may also find that Smoky Quartz, Red Tiger’s Eye, and Garnet work well too.

The orange color of the Sacral Chakra lends itself to crystals of the same color. Some examples include Amber, Carnelian, and Orange Calcite.

In addition, other helpful crystals for the Sacral Chakra include Tangerine Quartz, Moonstone, and Sunstone. Tiger’s Eye is also very beneficial to your Sacral Chakra.

Yellow crystals are generally the best for unblocking your Solar Plexus Chakra. They can help build self-confidence about your decisions and increase your overall optimism.

Some of the best crystals to activate your Solar Plexus Chakra include Lemon Quartz, Yellow Jasper, and Citrine. Other helpful crystals include Yellow Aventurine, Rutilated Quartz, and Honey Calcite.

Both green and pink crystals can be very beneficial in healing a blocked Heart Chakra. These crystals will build compassion and empathy, help you forgive others, and deepen your interpersonal connections.

Blue crystals are ideal to lessen fears of public speaking, increase honesty, and help you become more aware of your inner truth. As a result, these crystals are especially helpful to unblock the Throat Chakra.

Some specific crystals you can use include Turquoise, Aquamarine, Lapis Lazuli, and Amazonite. Additionally, Blue Kyanite, Celestite, and Blue Lace Agate are wonderful Throat Chakra healers as well.

To unblock your Third Eye Chakra, you’ll want to focus on dark blue and purple crystals. These are considered, “stones of growth,” and help build intuition and universal connection.

Crystals for the Crown Chakra help you connect the physical world to the spiritual world. The best crystals to unblock your Crown Chakra tend to be either clear or purple.

Helpful examples include Amethyst, Clear Quartz, Selenite, and Diamond. In addition, Howlite, Selenite, and Apophyllite can help unblock your Crown Chakra as well.

How to Use Crystals to Heal Your Chakras

There are a few different ways you can use crystals to unblock your Chakras. Any of the methods I’ll explain are fine, and you can choose whichever you prefer for your own practice.

The first method is to place crystals along your Chakra points. You can either lay on your back or on your front with the respective crystals situated corresponding to your Chakras.

The second method for unblocking your Chakras with crystals is to hold them during mediation. By visualizing the color of the Chakra you hope to heal, you can help focus the crystal’s energy and increase its healing power during meditation.

A third option for using crystals to heal your Chakras involves wearing them as jewelry. This allows the healing properties of the crystals to keep your Chakras balanced during everyday life.

No matter how you choose to use crystals to help unblock your Chakras, they can be powerful tools that work towards improving your overall well-being. Balancing your Chakras and allowing them to stay open helps keep your energy stable and leads to positive physical, mental, and spiritual health.