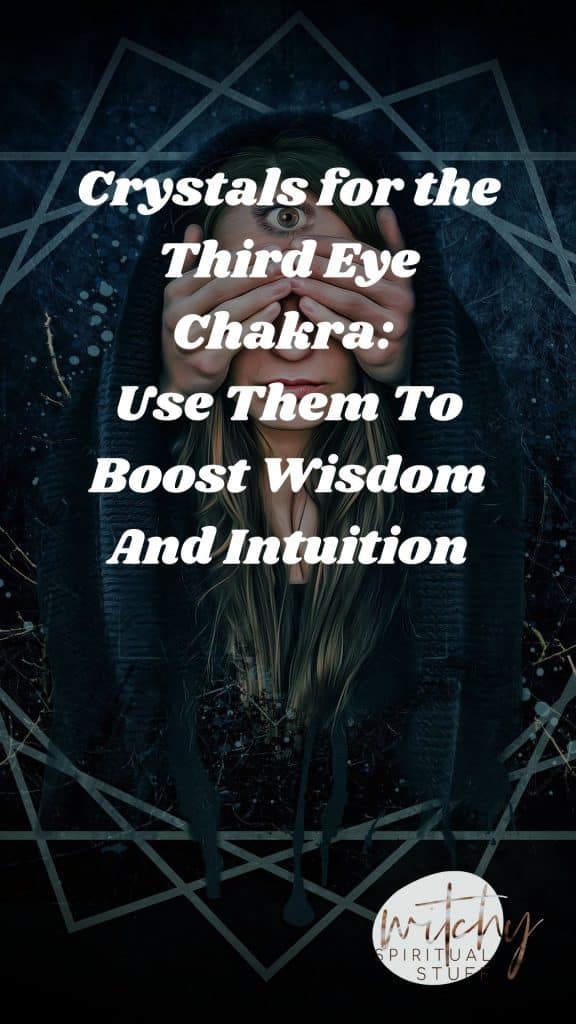 The third-eye chakra, also known as the brow chakra, is the center of our intuition and imagination. Located behind our forehead, this chakra connects us to the larger Universe, providing us with the vision we need to fulfill our true purpose.

When the third eye becomes blocked or misaligned, that vision becomes muddled. We may become short-sighted, confused, or even delusional.

For centuries, crystals have been cherished for their ability to clear and realign our chakras. As a vessel of vibrational energy, they’re especially potent for awakening the third eye.

By focusing our intention on crystals that tune into the brow chakra, we can nurture our intuition and envision a better future for ourselves. Here are the crystals that are traditionally considered to open and nourish the third eye.

The third eye has a long history in both Hindu and Buddhist traditions, where it typically symbolizes enlightenment. It also refers to a higher state of consciousness, such as being able to see beyond the realm of physical perception.

The Hindu god Shiva is often depicted with a tilaka, a diamond-shaped mark in the center of the forehead. This represents Shiva’s ability to unite binaries and unveil spiritual wisdom.

Medieval tantric texts describe the third eye as one of the seven main chakras that align the body. It is one of the last chakras on a ladder to spiritual ascension as meditation or other rituals encourage our inner “tree” to blossom.

In Buddhism, the third eye is the eye of consciousness that allows people to gain knowledge through inner sight. Like Shiva, the Buddha is often depicted with a brow mark, called an urna in this tradition.

The third eye also has a physiological presence that we can see in some reptiles and amphibians. Their parietal eye allows them to perceive light and adjust their circadian rhythms, and in a sense, humans have this too in the form of our pineal gland.

In short, the third eye facilitates a greater sense of perception, connecting us to the Universe’s bountiful knowledge and most profound revelations.

In the New Age chakra tradition, the third eye is associated with the brow chakra and the color indigo. By keeping your third eye open, you maintain your intuition and clarity.

If your third-eye chakra becomes blocked or clouded, you may experience physical symptoms such as headaches or blurred vision. Poor intuition can also lead you to negative or delusional perceptions, stubbornness, or a lack of motivation.

None of those conditions are ideal, but thankfully, opening the third-eye chakra is relatively simple. By nurturing your intuition, you can see new solutions and opportunities beyond the obvious.

Crystals for The Third Eye Chakra

Traditional third-eye crystals are indigo or deep-blue in hue to match the chakra’s color. Often, they share mythological associations with visionaries or sages.

Here are some essential crystals to open and realign the third-eye chakra, with the unique properties of each.

This magickal blue stone hearkens back to ancient Mediterranean and African societies, where it was associated with royalty and wisdom. Lapis lazuli adorns the sarcophagus of King Tutankhamen, among others.

Formed from lazurite, calcite, pyrite, and sodalite, which is also on this list, lapis lazuli is a gorgeous celestial hue with gold or white flecks. For this alone, it was often used in meditation to symbolize a starry sky.

In ancient Islamic traditions, lapis lazuli was considered a source of protection from the evil eye. This is interesting as Shiva’s third eye was said to destroy evil forces.

Lapis lazuli is often used to heal the throat chakra, but its power for unveiling greater truths and overcoming deception make it ideal for the third eye as well.

Sapphire is among the most sacred gems in almost every spiritual tradition. Associated with wisdom, protection, and insight, it has long been used in religious rituals and among royalty.

This stunning stone appears in many different hues, although the deep blue color is the most popular. It’s considered a precious gemstone and is technically corundum, a crystalline form of aluminum oxide.

For centuries, sapphire was carried as a talisman to protect the wearer against poison, disease, and black magic. It was also thought to restore vision and promote concentration, which certainly speaks to its uses for the third eye.

Sapphire even appeared in the show “Manifest” as the crystal that helped resurrect all the characters and mediate their visions. This idea dates back to ancient Hebrew and Greek lore, where sapphire was linked to heavenly visions and oracle readings.

As a symbol of integrity, wisdom, discipline, and intuition, sapphire has immense power for opening and realigning the third eye. Like lapis lazuli, it may also be used for the throat chakra.

A gorgeous violet gem, iolite has long been associated with wayfinding, vision, and clarity. It is also known as the Vikings’ Compass as Leif Eriksson would use iolite to better view the stars as they traveled the icy Atlantic.

Iolite is unique in that its hue and transparency shift as you ponder the stone from various angles. This makes it a traditional crystal for self-reflection and reorientation.

A crystalline version of the mineral cordierite, iolite promotes awareness, motivation, and self-expression. By restoring balance to the body and mind, it nourishes the third eye.

This stone has traditionally been used to heal diseases of the eyes, brain, and mind, from poor vision to migraines to dizziness. It’s also often associated with sleep and mental health.

Iolite is like the velvety night sky that offers direction when all else fails. It may also be used to open the crown chakra, given its associations with intelligence, hope, and determination.

Kyanite is an innately balanced crystal as it does not retain negative energy. Known for its cleansing qualities, kyanite has long been favored for chakra healing.

The indigo variety of kyanite is ideal for clearing the third-eye chakra. The word itself comes from the Greek “kuanos,” meaning “deep blue.”

Kyanite has traditionally been associated with diplomacy, clarity, and fairness. These are powerful qualities for the third eye, which when imbalanced can cause damaging assumptions or miscommunication.

Kyanite removes barriers between poor perception and true wisdom, making it ideal for restoring relationships, sense of purpose, and even memories.

Like many other crystals on this list, kyanite is ideal for cleansing both the third-eye chakra and the throat chakra, as it encourages honest communication and personal integrity.

Also called the “Logic Stone,” sodalite is known for nurturing intuition, creativity, discipline, and the clarity of vision. It elevates your state of consciousness and clears your mind of negative thoughts.

That’s partly because, like others on this list, sodalite strongly resembles a starry sky. It has traditionally been associated with observation, analysis, and connection, hence its nickname.

Sodalite is a sodium-rich form of aluminum silicate and is typically opaque, although it sometimes takes on a more traditional crystal appearance. Its deep blue hue and complex patterns invite deep reflection that can open the mind to new perceptions.

For all those reasons, sodalite has also been named the “Poet’s stone” and the “Stone of Truth.” It invites the Muse, builds focus, and helps the mind break free from tired thought patterns.

You may use sodalite to honor your true intentions and banish negative thoughts. When you focus on sodalite, you can clear the third eye and open up the chakra to new ideas and discoveries.

What does the third eye chakra help with?

All these crystals may be used in ritual work, meditation or yoga sessions, or as talismans. Carry them with you to continually open yourself to the Universe’s wisdom.

Third-eye crystals can also relieve ailments of the eyes, ears, nose, and throat, as well as your brain and mind. These benefits work intellectually and spiritually too, making them ideal for writers, communicators, educators, and leaders.

Enlightenment may be a work-in-progress, but you can still nourish and align your third-eye chakra. It’s vital to expanding your perception and envisioning a better future for yourself and others.