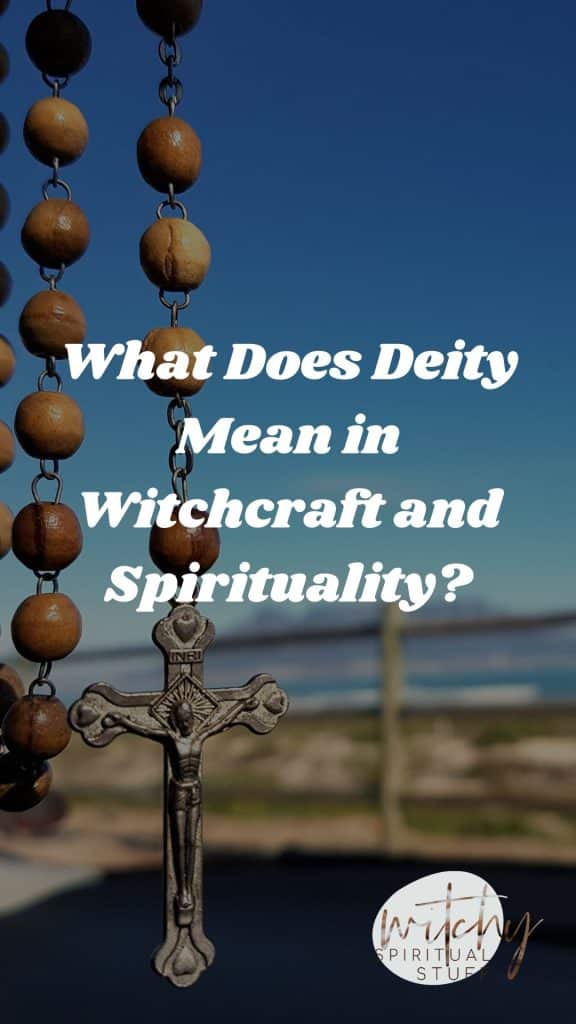 A deity is a god or goddess. And also it is so much more than that.

I remember once a friend messaged me after I had come out very strongly as a witch.

“What deities do you pray to?” She asked me, eager to come into her own identity as a witch.

“I don’t pray to any deities.” I responded.

“But,” I added, so as not to discourage her. “I am familiar with most of the deities from the canon and even many beyond it.”

The canon is what we refer to when we talk about the most widely known stories across civilizations, and mostly from western culture.

All deities come from stories.

And all stories are either within or outside of the recognized selections, the canon.

I gave her some pointers, if she was interested in praying to deities, specifically Mary Magdalene and Kali Ma, the light and dark of the divine feminine.

For me, I pay as much tribute to deities as I do to chakras as I do to any hard, rigid structures in mysticism.

They are all, really, guides, focal points, ways of understanding what we simply cannot ever understand.

“If you understand it, it’s not God.”

We cannot possibly understand what is by definition far, far beyond our grasp.

It’s why we give it so many names.

All Gods Are One God

The Bible tells us that God created man in His own image.

First, we must understand that while the inspiration for the Bible and all holy scriptures that have endured for thousands of years was indeed surely divine, the interpretations and the translations were clearly driven by human motivation.

The first and most obvious example of this is the fact that the God in the Bible is given the masculine gender, He/Him, and title “Father/Lord.”

Nowhere in nature do the male species create, yet we are expected to believe that the ultimate creator is a male?

Clearly this scripture was written down by men.

When we understand that, that men were the scribes of divine inspiration, the rulers of much of earth for much of human civilization thanks to their physical might over women, we can understand how it came to be misunderstood that God created man in His own image.

The truth, when you see the metaphor in the statement, is that of course a creator creates using the same material from which the creator is made.

You cannot make something and not imbue it with your energy.

So the meaning of “God created man in His own image” is telling us that we are divine, we are of the same energy as the Universe.

We are the Universe.

And we should be living lives that reflect that.

We should be living as gods, creating, expanding, flowing, adapting and shifting, and most importantly, loving.

But, instead, we flipped that scripture, and we created a god in our own image.

The Bible is filled with stories of a vengeful god, a wrathful god, a jealous god.

A god who spits you out.

A god who strikes down little children for acting like children.

A god who turns his back on his creations.

A god who casts his children out of Eden.

A god who commits his favorite angel to eternal damnation for daring to challenge him.

Because, to me, God, nature, Love, the Universe, is an all-powerful, all seeing, all knowing, ever present collective of energy.

If God is present in all of us, then it stands that it cannot be an individual with individual human emotions, desires, fears, hopes, dreams.

We are born as humans with that Love, but also, as a means of survival, with fear.

And from those fears, we create gods in our own image.

Those gods, over time, become deities.

In the beginning of humanity, we needed to shape stories that helped us understand what we could not grasp.

Why a sudden storm on a beautiful day?

Why a volcano eruption?

Why a comet striking earth?

Why the death of a perfectly healthy baby?

Why the betrayal of one brother by another?

We created and then credited and blamed gods for our human mistakes.

Remember, “to sin” comes from the Greek word meaning “to miss the mark.”

So, every time we missed the mark, failed, suffered, or experienced great pain or joy, we pointed to a deity.

And before the Christian Bible was formed, all civilizations on earth had several deities to which they prayed, sacrificed, and praised.

The Hebrews were the only notable society that believed in only one god, but even they created a god in the image of man.

Look at the Old Testament in the Bible, which is the same as the Hebrew holy book, the Torah, and you will find a very human god waging war on people and killing babies, choosing favorites and causing worldwide famine and floods.

The reality, we now know from science, is that while the Universe certainly created the earth energetically, it created it with a brilliantly balanced design that has unfolded here for billions of years on its own.

Nature is a neutral force with floods and fires completely independent of the will of any deity.

But we need our gods, or our God, as focal points for our human understanding.

So, much like the chakras, which stand as energetic focal points for our human joy and pain, the deities are energetic placeholders for our wishes and desires, our manifestations.

When I do manifestation work, I work directly with the Universe.

I have no interest in creating a middleman or woman of sorts to intervene for me with the forces of nature and universal laws.

I was created in the image of the Universe.

I am God in human form.

Why would I need to call upon an energy source beyond that, separate from that, to work with me?

But that is just my belief.

Abraham Hicks tells us that whatever we believe, really deeply know, to be true, is in fact true.

So, for those of you out there reading this who want to work with deities, go for it.

As an English major in college with a graduate degree in Comparative Literature, I love learning the stories of the various gods across history and cultures.

Just as a yogi spiritual witch I love learning about the chakras and, as Caroline Myss calls it, the Anatomy of the Spirit.

It cannot hurt to honor a deity, to work with a deity, or to believe in a deity.

After all, all gods are one god.

When you pray to the Christian God, the Muslim Allah, or to Thor, Loki, Krishna, or Kali Ma, you are praying to the same energy.

And, just like with chakras or even crystals, I can see how it would help to direct your energy to a specific deity in order to maintain your specific focus on whatever issue you may be dealing with, whichever specific spell you may be casting.

If you hope to learn about deities, you can begin in your local bookstore with books on mythology and ancient religions and then grow from there.

Rebecca Campbell and Lisa Lister also do a good job of summing up the most prominent gods in spiritual witchcraft.

But the greatest lesson you learn, long before you worry about the various deities to which you can connect your spiritual, is that of the divine feminine and the divine masculine.

Though God, or the Universe, is beyond gender and sex, the material world is balanced between masculine and feminine, and if we are suffering from anything today it is from a lack of balance.

Because I have no doubt that the vast majority of my readership is female, I would strongly advise you to study up on achieving this balance.

Mary Magdalene, Revealed, by Meggan Watterson is a great start to this journey.

We women, especially we spiritual witches, have lost our way in this world. It is a highly imbalanced patriarchy under which we have lived for far too long, and it is high time in this Age of Aquarius that we reclaim our femininity.

Time to abandon all thoughts of “girls can do everything boys can do” and find our place with “what do I really want to do?”

The answers to those questions will hold much more power that anything that could ever have come from trying to compete outside of our own divine femininity.

Oh my deity, it's like you dipped into my brain and put all my disjointed thoughts into one post that makes sense of it all! I was reading through going OMG YESSS exactly THAT!!!