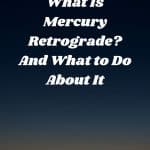 Well, it’s that time again. Anything and everything that can go wrong with any kind of communication or technology will be blamed on Mercury being in retrograde. This trend caught on during the 1970s’ obsession with astrology and its relationship to events and experiences on earth and human behavior.

The reality is that Mercury in retrograde has no more effect on your life, your technology, or your communications with others than the Roman gods do. Is it still fun to blame outside sources when things go wrong? Of course! Just be careful not to take it all too seriously.

The Science Behind Mercury Retrograde

We were the first healers, doctors, midwives, and pharmacists on earth in most cultures. Science, defined as the study of experiential and experimental learning, is inherent to practicing magic. We don’t practice magic that fails, after all. We practice magic we know to be true. It is not chance. It is evidence based.

So here’s the evidence on Mercury Retrograde:

Mercury is the fastest and smallest planet in our solar system. It is also the planet closest to the sun. Because of these realities, the planet was named for the Roman messenger god, Mercury, who was also known to be fleet-footed and ruled over communication and advancing technology.

Astrologists back in the 1800s began observing Mercury in retrograde as an ill-omen because they noted that the planet appeared to be moving backward.

What is actually happening is that, because Mercury is so close to the sun and so fast, it laps the sun three to four times in the same time it takes earth to rotate only once.

A year on Mercury is only 88 days. Each time Mercury laps Earth, it appears to be going backward in the sky, from our perspective. It looks like it shifts from moving eastward to moving westward. This phenomenon, however, is just a trick of motion and perspective.

Astronomers do indeed refer to this phenomenon as “retrograde,” but zero evidence exists that this event, which occurs three or four times a year, has anything to do with humans communication or technology.

Beware the Power of the Mind

Back to universal laws. While there is no evidence that Mercury in retrograde has any effect on humans and our communications or technology, or any effect on earth at all, the power of the mind is might.

If you are determined that something is true, it is true. You can literally think something into existence. That is how powerful the mind is.

Sadly, most people only experience that hard truth in the negative. They cannot help but focus on their fears and worries, and they forget to focus intently on their potential and opportunity.

This, in the spiritual world, is what we call a self-fulfilling prophecy.

You know Mercury is entering retrograde, you prepare for bad things to happen, and, like magic, bad things happen.

Others will tell you that something bad happened, their phone glitched, the internet shut down, an ex called them up, you name it. Then, they realized Mercury was in retrograde.

We call this coincidence “incidences coexisting or cooperating.” Two things happen at the same time, and you draw an illogical conclusion. That same thing has probably happened numerous times when Mercury was not in retrograde, but you had no reason to notice any corresponding planets.

Watch your thoughts. They are creating for you even when you are not paying attention.

As Above So Below

Among all mystical and spiritual texts, including the Christian bible, you will find some version of the ancient Arabic hermetic text’s “as above so below.”

I love when religious texts across cultures, regions, and time periods have the same messages. It seems to me that those similarities point to divine guidance, divine wisdom, and intuitive creation. The greatest spiritual leaders throughout history have clearly had a clear connection to source energy to be able to speak so plainly to so many people and find such large followings.

“As above so below” speaks to the connection among all the planes of existence, spiritual, physical, ethereal, and so on.

We believe things into existence with our thoughts, and that energy of creation causes an expansion in the universe. This expansion is our reason for existing.

What to Do During Mercury in Retrograde?

Nothing. The greatest thing about the law of attraction is you can choose not to buy into the hype. You can look in another direction.

Pay no attention to the things you do not want to affect you and build your life and your daily experiences elsewhere.

And when technology fails, as it will, and communications break down, as they do, and life seems harder than usual, whether it is Mercury in retrograde or not, just stop struggling.

I heard this great quote recently, “Don’t just do something. Stand there.”

The quote was related to midwifery and how much women are served when midwives can take a breath before making a decision. But it really applies to all of life.