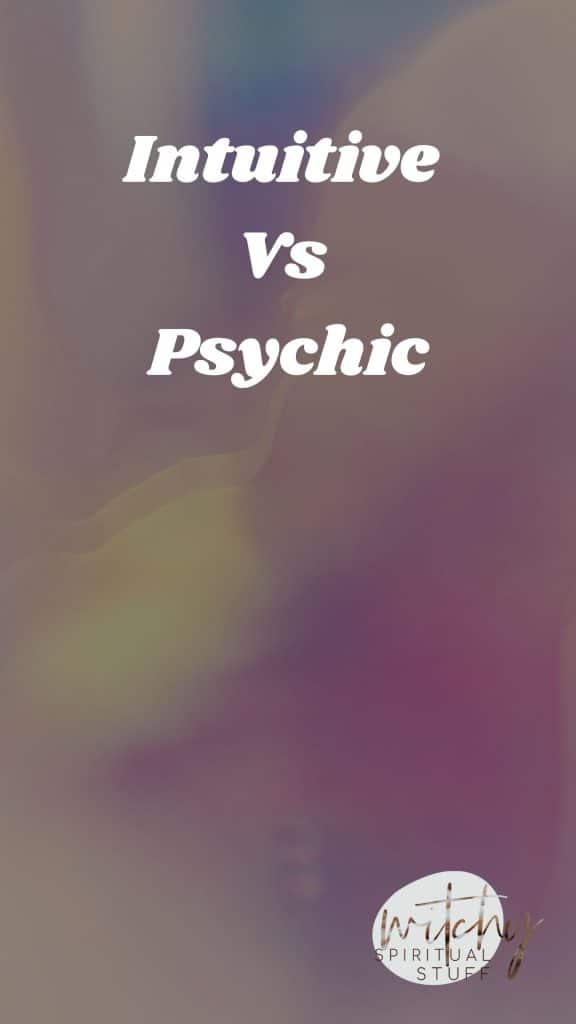 It’s the same thing, basically. An intuitive versus a psychic.

Sure, there are nuanced differences, and we’ll discuss them here, but the most important thing to know is that intuitives and psychics tap into power outside of the five physical senses.

We’ll start with the word psychic because it is the most commonly used term in the world of metaphysical power.

So, when we talk about things beyond or outside of what we can see, hear, taste, touch, and physical feel, we are discussing metaphysics.

Psychics are those who claim to have metaphysical powers. Most of the time, you won’t find one person calling another a psychic unless that person has claimed the title for their own.

Usually, a psychic is someone who has turned intuitive powers into a profession.

Psychics are who we typically think of when we hear of people on television, real or fictional, who read people’s future, pull tarot cards, and help the police find missing persons.

In most large cities, and many small ones, you can find a “psychic reading” shop set up, where you can go pay a fee to have your palm read or your life path explained.

The percentage of psychics that are legitimately intuitive is hard to determine.

Because every single one of us has legitimate intuitive power.

But many psychics are not tapping into intuitive power but are instead using their abilities to fool and cheat vulnerable people out of their money.

An intuitive, on the other hand, is someone who has tapped into their intuition, or their psychic power.

They are able to operate in the metaphysical world as well as the physical one.

Anyone can call themselves a psychic.

An intuitive not always identify or even understand their powers as psychic or metaphysical.

They will just say they have dreams that sometimes come true. That they “just know.” That they are excellent judges of character. That they feel other people’s emotions.

Clairaudience The ability to clearly hear voices from the metaphysical world

Notice that each definition has the word “clearly” in it? That’s because these intuitions are also called the four “clairs.” Clair is the French word, which comes from its Latin root, for clear.

Now, some will tell you that there are four types of psychics or intuitives. They will say that one person is this type of clair or another, but the truth is much more complex than all that.

Our metaphysical senses are indeed part of our hardwiring. We came into this human experience with the ability to “sense” things outside of the physical world.

We were all born with the ability to see things outside of the physical world, spirits, energy, etc.

We each came into this world with the innate sense of feeling the emotions of others.

Each child born can hear voices at a metaphysical level.

And every new baby has the gift of “just knowing.”

But, as we grow up, the physical world inserts itself so strongly into our perceived reality, that it often becomes our only reality.

A great example of this phenomenon and how it happens in the physical world lies in the fact that the human brain is born with the ability to mimic any sound on earth.

A child can learn any language he or she is exposed to. We know this for a fact.

But, as time goes on, the brain not exposed to certain sounds regularly and practicing those sounds, will inevitably close off the “synapses” responsible for mimicking those sounds, conserving energy for other uses.

The same is true for metaphysical senses.

Soon, children raised by adults who have inserted their own, adult, stories into their children’s heads adopt those stories as their own and they lose touch with their intuitions.

Don Miguel Ruiz discusses the stories we carry in our heads, and how much damage they can do, in his book The Voice of Knowledge.

But! While each of us is capable of losing touch with our innate metaphysical senses, we can never be completely cut off from them.

To reconnect, we simply must unlearn the stories handed to us that do not serve us and relearn how to use our abilities again.

From Abraham Hicks to the Christian Bible and the Torah, and even to Buddhism, we are told by all great religions and spiritual teachings that God, the Universe, and our intuition are all but a phone call away.

Abraham Hicks calls our act of losing touch a “pinching off.” But all we need to do to reconnect is to sit in meditation for 20 minutes each morning when we rise.

All we have to do is turn away from our purely human emotions and energies – anger, frustration, sorrow, despair, worry – and aim for our divine energies – love, joy, abundance, gratitude, hope.

Remember, intuition is communicating with your higher self. Information that comes from an all-knowing consciousness, straight into your crown chakra and felt deeply in your solar plexus chakra is intuition.

My favorite story about this return to knowing is that of the prodigal son in the Christian Bible.

The son leaves his father and wanders lost in the desert for weeks, months, ending up desperate and dying.

As soon as he realizes he is lost without hope, he understands that he belongs at home with his father.

And as soon as he understands that, and longs to be home again, he turns around, and he is home.

No journey is necessary for months back through the desert for weeks and months on end.

Once you know, once you accept, once you understand and long to be back in the embrace of an infinitely wise and loving universe, you are there.

The real journey is back to that understanding.

Your Journey to Intuitive Living

If you are wandering in the desert, desperate and in despair, feeling empty of spirituality and trying to figure out how to tap into your innate abilities, it is time for your journey back to understanding.

The very first thing to do to stop pinching yourself off from your intuitive abilities is to spend time in meditation every single day. Sit for 20 minutes and quiet your mind. Mat Auryn has some great tips for quieting your mind in meditation, as does Pema Chodron.

My favorite practice is to lie in the yoga corpse pose, flat on my back, and focus on my breath. Whenever thoughts come into my mind, I just say “thinking” in my head, and invite them back out.

Your job is to sink deeper within yourself and trust your divine power to communicate with you.

When you have reached the point of total silence, you are connecting.

Pivot to the Positive

Keep in mind that God, the Universe, Spirit, does not communicate in the negative, indeed does not even recognize the negative, so you will need to work on getting yourself into pure positivity.

This does not mean “positive vibes only” or “all love and light.” It means that when you experience negative emotions, you must feel them, and then let them go. Find the gift in the hardship. Find the lesson. And find gratitude.

Practice, of course, makes perfect. A consistent formula will give you consistent results. So work on letting go of old stories, recognizing negative emotions and what is behind them, and dedicate your existence to developing your metaphysical senses.

This is a lifelong journey of healing and changing who you have become fundamentally from a person stuck in “the real world” to one willing to open up to the wholeness of the entire universe.

And, as always, remember to go lightly.

You are still human after all, and you must love and accept yourself in every moment as you are, deeply flawed and determined to grow and progress.

Rest, relax, and be easy about it.

And hey, the better you get at your intuitive abilities, the more you may want to join the world of psychics!