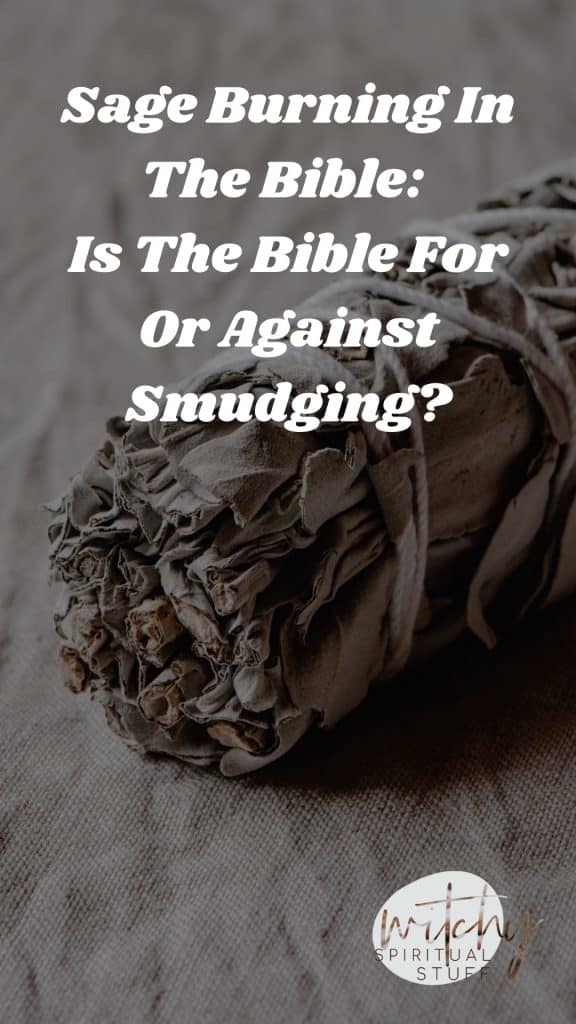 Burning sage, or as it’s more commonly called in spiritual practices, smudging, is part of an ancient cleansing ritual performed by spiritual people in many different cultures and beliefs.

What is sage, and why is it used to cleanse and purify negative energies?

Sage is a herb that is considered sacred by many cultures. It grows in many parts of the world but is most prevalent in the Mediterranean.

Even though the burning of sage is a common practice in today’s world, it is as old as time and has passed through many generations and civilizations.

What does the burning of sage symbolize?

Sage can simply be used to fill your space with the soothing smell it exudes and nothing more. It doesn’t have to signify anything or mean anything unless you put that intention behind it yourself.

But, sage burning has been used as a spiritual and purifying ritual for a millennium; people believe that its earthy aroma was so calming that it can induce a tranquil and calm atmosphere, making it an ideal aid for meditation.

Others claim that the smoke is so potent that it dispels negative energy in a room as well as any wandering spirits that may wish to harm you.

Even today, the practice is still very much alive and strong, particularly among Native Americans, who use it before critical ceremonial events and for healing.

A few years ago, many others had begun to embrace the technique, turning it into an “Instagram trend,” which did not sit well with Native Americans, who saw it as cultural appropriation and a slight against their culture.

You can read more about the ethics of burning sage here and a breakdown of closed and open spiritual practices here.

Most people are unaware of the significance of the practice, which is particularly noteworthy given that the burning of sage was initially prohibited.

Individuals who engaged in the practice were labeled witches and sentenced to death. And today, burning sage has become fashionable, and it is acceptable when done by the same folks who formerly chastised them for doing it.

🔥 How To Properly Burn Sage.

If you’re new to smudging, you may be unfamiliar with the proper technique. We’ll get there eventually, but first, there are over 900 species of sage, also known as salvia, that thrive worldwide. However, white sage (Salvia apiana) and white prairie sage (Artemisia ludoviciana) are most commonly used.

How do you burn sage, then? You will need sage sticks, a source of fire such as a match or a lit candle, and a fireproof bowl.

You need to ignite your sage sticks and allow them to burn for a few minutes before extinguishing the flame and allowing smoke to permeate.

Note. Your intention determines how you burn your sage. Is it solely for scent or for cleansing and other purposes?

If it is for purification, you might utter some affirmations there, such as “let the smoke purify this home of evil deities.”

👐 What Are The Spiritual Benefits Of Burning Sage?

Burning sage is said to help us connect to the spiritual realm and enhance our intuition. It’s a great way to open up your third eye. (Read 25 other great ways to open your third eye here.)

It also helps dispel negative energy, encourages sleep, and can enhance cognitive thought. Sage is thought to help with gaining wisdom and longevity.

Sage connects us to the spiritual plane and makes it easier to cleanse the negative energy in our homes and ourselves, restoring harmony.

When you’ve removed the negative energy from your home with sage, be sure to set the intention to let only positive energy in.

📖 What The Bible Says About Burning Sage.

What does the bible say about burning sage? Sage burning, or smudging, is a touchy topic among Christians.

It all stems from the fact that spirituality’s definition and meaning are extremely ambiguous. Although some Christians believe the practice is harmless, others consider it occult and passionately oppose it.

Burning sage is neither promoted nor clearly prohibited in the Bible. Admittedly, it is not even referenced explicitly in any scripture. The Bible cites the burning of incense made from various herbs.

Even today, incense burning is widespread in the Roman Catholic Church and other eastern orthodox churches, which adds to the misunderstanding because it’s so similar to smudging.

🔥 Is Burning Incense In The Bible?

For instance, in the book of Exodus, God instructs Moses to gather 11 herbs, including frankincense and myrrh, for an incense offering. Aaron is commanded to burn fragrant incense on the altar each morning while tending the lamps.

He must burn incense once more when he lights the lamps at twilight to ensure that incense burns consistently before the Lord for future generations.

12 He is to take a censer full of burning coals from the altar before the Lord and two handfuls of finely ground fragrant incense and take them behind the curtain.

13 He is to put the incense on the fire before the Lord, and the smoke of the incense will conceal the atonement cover above the tablets of the covenant law so that he will not die.

It is clear from the Bible that the practices of burning incense and smudging are very similar, even though sage was not one of the herbs specifically mentioned.

Both practices have been employed for spiritual purposes at some point in history.

🏠 Is It Okay For Christians To Burn Sage In Their Homes?

The same question has been asked, “Does the Bible mention the practice of burning sage?”

When I was initially asked this question, my first reaction was to say no because I couldn’t locate a reference to ‘burning sage’ anywhere in the Bible.

You would believe that since the Bible does allow a similar practice, such as the burning of incense, and there is evidence in the scriptures that burning incense is acceptable for Christians, then burning sage should be justified as well.

The Truth About Burning Sage

Nonetheless, smudging appears to be highly spiritual. It can be challenging to distinguish between rituals that are desirable to God and those that are sinful and so unsuitable for a Christian.

As a result, most Christians are concerned that sage burning has occult roots and is associated with witchcraft.

On that note, the Bible expressly bans the practice of witchcraft, casting spells, or using mediums.

The scriptures, according to Deuteronomy 18:10-12 in the new international Bible, say

10 Let no one be found among you who sacrifices their son or daughter in the fire, who practices divination or sorcery, interprets omens, engages in witchcraft,

11 or casts spells, or who is a medium or spirits or who consults the dead.

12 Anyone who does these things is detestable to the Lord; because of these same detestable practices, the Lord your God will drive out those nations before you.

See this here for more information on how God forbids the use of witchcraft and other supernatural powers in his creation.

It’s important to point out that we now live in a new Christian period. When GOD allowed his only son Jesus to suffer for the sins of all humanity, he heralded the beginning of a new era, a time in which Christians no longer require incense burning to approach and be in the presence of God.

Everything must be done through the son in order to reach the father.

Therefore, any incense or even sage burning is unnecessary, and Christians are relieved of the obligation to practice.

There is no consensus over whether or not smoking sage is beneficial. It depends entirely on your motivation and subjective opinion of your interpretation of the scriptures.

Aside from the airy, earthy aroma produced by sage burning and its spiritual benefits, sage has been discovered to have myriad health benefits.

Assistance with anxiety and depression.

It should come as no surprise that the smoke produced by the burning of sage has been shown to have mood-stabilizing properties. It soothes your nerves and puts you in a quiet, tranquil mood free from negativity.

This is precisely what a person suffering from anxiety or depression requires. So the next time you’re feeling apprehensive, light a little sage.

Improves the overall quality of your sleep.

Lack of sleep can result in various physical and mental health concerns. Scientific studies have confirmed that.

Being in a good mood and getting enough sleep can assist you in maintaining prolonged attention and better memory.

Medicinal smokes like sage, for example, have been shown to possess highly effective antimicrobial and antibacterial properties.

As a result, it will not only cleanse out negative energy but also serve as a disinfectant, removing fungi, bacteria, and viruses from your home.

🌬 What does it mean when your sage keeps burning out?

It doesn’t mean anything spiritually when your sage goes out. It just means that your sage is bundled too tightly and can’t get enough oxygen to stay lit.

Loosen the string around the bundle a little, and try to spread the sage apart with your fingers.

The Bible does not include formal prohibitions against the burning of sage herbs in the old or new testaments. Furthermore, there is no indication in the Scriptures that you will go to hell if you do it.

This leads me to conclude that the burning of sage is entirely a personal preference.

If Christians want to burn sage, nothing in their teachings or scripture prohibits it.