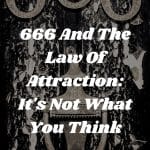 If you’re seeing the number 666, it’s probably not an accident. Something in your life is triggering the number to show up again and again, and it’s often a positive sign that the universe wants to send you a message that will help you manifest the life you truly want.

What Are Angel Numbers?

Angel numbers are a form of guidance that can be found in the form of a sequence of numbers, words or phrases. They are often found on clocks, license plates, and receipts.

Many of the well-known angel numbers are triple numbers such as 888 or 222. These special sequences of numbers are often considered to carry a special message from the angels.

If you see repeating numbers, it is said that the angels are trying to communicate with you. They often use Angel Numbers as a way to get our attention and deliver a specific message.

The meaning of Angel Numbers can vary depending on the number sequence. For example, the number 1111 often means that you are on the right path and doing your best.

But angel number sequences can be interpreted in several different ways. One way is to look at the sequence as a sign from your angels that you should take action in your life.

You can think of them as spiritual snapshots of what is going on in your life right now. By understanding the angel number, you can get insight or receive positive confirmation.

There’s been a lot of talk on social media lately about people seeing the number 666 everywhere. Some people are convinced that this is a sign of the end times, while others see it as a simple coincidence. So what’s the truth?

Many people believe that the number 666 is the mark of the beast or the Antichrist. This number is mentioned multiple times in the Bible and is often associated with evil.

Because of this, some people believe that seeing it frequently is a sign that the end times are coming.

Furthermore, the number 666 is often associated with the devil and is considered to be the sign of the beast. Many people believe that this number is being purposely displayed all around them, but what is the real reason for this?

Conspiracy theories around this number are numerous. But here’s another perspective on the number 666 – it isn’t some awful sign of evil or doom.

Instead, the recurring presence of 666 in your life might be signaling the need for positive change.

What’s the Spiritual Significance of 666?

Doreen Virtue, a well-known author, and angel number expert, authored more than 100 books, including “Angel Numbers 101” and “Heal Your Life.” In her book, “The Angel Number 101,” she defines the meaning of 666 as “a sign of protection from evil or danger.”

She says that this number often appears when people are being threatened by negative forces. 666 can also be a sign that you’re attracting what you fear or worry about. This can happen when you’re focusing on what’s wrong with your life instead of what’s right.

Why Are You Seeing 666 Everywhere?

If you are seeing 666 or any repeating number, the universe is most likely trying to communicate with you. Angel numbers are a form of guidance that can be found in the form of a sequence of numbers, words, or phrases. They are often found on clocks, license plates, and receipts.

Angel number sequences can be interpreted in different ways. One way is to look at the sequence as a sign from your angels that you should take action in your life.

What is the Law of Attraction?

While this might sound like modern, new-age thinking, it is quite the opposite. This law has been around for a long time – it was first mentioned in the 1800s by William Atkinson.

The principle of the LOA is a powerful tool that can help you manifest your desires if you understand how to use it correctly. It starts with the basic premise that like attracts like.

The power of positive thinking is a very important aspect of using the law of attraction correctly. If you don’t believe that you can achieve your goals, you won’t.

You have to impress upon your mind that you can improve your life or manifest the reality you want.

Here’s where LOA and angel numbers meet to become a powerful force in your life.

666 and the Law of Attraction

The repetition of numbers is one of the major signs that the law of attraction is showing up in your life. When angel numbers are involved, the universe is likely using these messages to shed light on areas you need to fix or let you know you’re definitely on the right path.

Using angelic numerology allows you access to this supernatural force that works on your behalf and helps guide your subconscious mind by communicating its messages through synchronicity.

You can use these special numbers for anything from attracting love into your life, overcoming obstacles and finding inner peace, or simply finding clarity when making important decisions. The only limit is how creative you are with this spiritual gift!

When angel number 666 is showing up in relation to the law of attraction, it is time for you to refocus your thoughts and start embracing positive emotions and thinking.

To attract the positive into your life, you can’t keep focusing on all the material things you currently lack. Materialism, while not evil, can distract you and lead to negative feelings of frustration.

You can implement the lessons of angel number 666 by transmuting those negative emotions into positive ones with the following steps:

So, if you have been seeing the numbers 666 repeatedly, fear not! It isn’t a bad omen and you have nothing to be afraid of.

Take charge of your life one day at a time with the spiritual messages of angel numbers and the law of attraction.