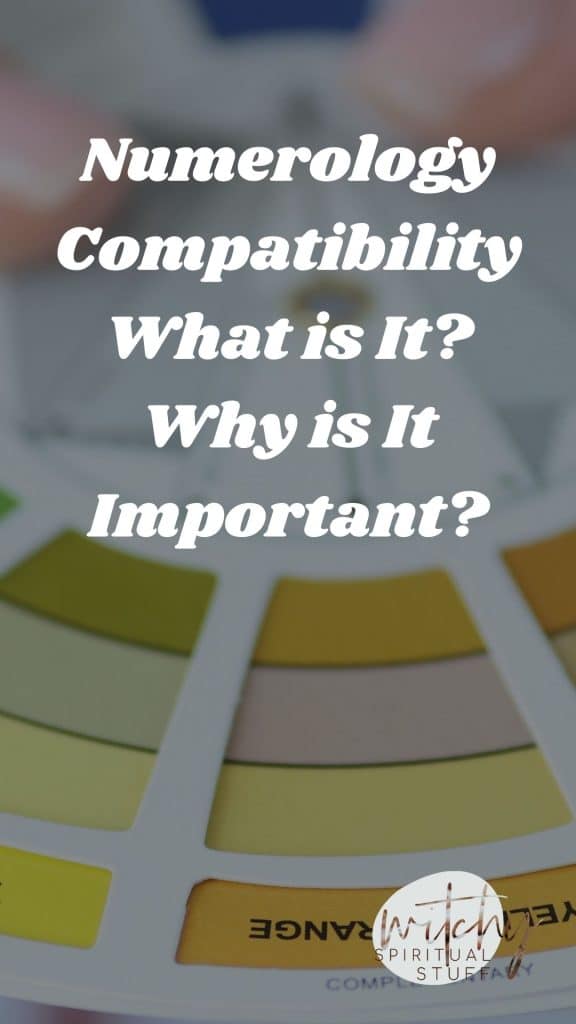 What is Numerology Compatibility?

For example, let’s say you’re going into business with someone or you’re entering a new romantic relationship with another person. Either way, you’ll want to know if the two of you are compatible.

Numerology can help you determine if you are aligned with someone else, no matter the reason. Numerology assigns various numbers to you, and from there, you can see the areas that you will be in agreement with another person.

How Do you Find Someone’s Numerology Numbers?

It’s super simple to determine someone’s numbers, and all you’ll need is their birthdate. So, if you can get ahold of your partner’s birthdate—and you know your own—then, you’re on your way to figuring out if you’re compatible.

You want to reduce the numbers of the birthdate to a single digit. However, there’s an exception for the master numbers, which are 11, 22, and 33.

You’ll want to reduce 16 to a single digit, so—you guessed it—you’re number is 7.

Who’s compatible with who?

If you’re a 1, that means you’re super confident and you’ve got spunk. It’s going to be difficult to pin you down because you’ve got energy!

You’re super independent, and this trait makes it so that you’re compatible with 3s, 5s, and 6s. In terms of who you don’t get along with—other 1s, 8s, and 9s are not your friend.

Let’s move on to 2s; if you’re a 2, you have good instincts and you get along with everyone. You’re super compassionate, so you might get your feelings hurt by partners easily.

If you’re a 2, you’re compatible with 4s, 6s, and 8s. However, watch out for 3s and 5s, because you aren’t going to get along with those people so well.

Next, are 3s; if you’re a 3, chances are you are fun and young at heart. You’ve got a wild side, which makes it hard for you to concentrate and give your undivided attention to someone else.

Moving onto 4s. You’re not really a romantic, but if you’re a 4, there’s a good chance that you are loyal and stable.

Next up, 5s. If you’re a 5, that means you play hard, but your relationships don’t last forever, because you have a tendency to cut things off when you get bored.

Onto the 6s, if you’re a 6, that means you’re extremely dedicated and loving. However, this leads to you loving so hard that you might forget about your own needs.

Returning to the number of that corresponds with our example, the numerology number of our theoretical character is 7. If your number is 7, that means you’re probably an introvert with a lot of diverse interests.

If you’re an 8, that means you’re incredibly driven and always wanting to succeed. You’re a leader, but sometimes that will lead you to overpower your relationships.

Finally, we’ve made it to 9s. If you’re a 9, that means you’ve got a big heart. You’re always very romantic, and sometimes it’s hard for you to get over your heartbreaks.

What Happens If I End up in a Relationship with Someone I’m not Compatible With?

That way, you can understand how to navigate your different personalities. But if you know that you aren’t going to mesh well with someone else, catch it early!

Try to avoid the partnership if you can, because you don’t want to regret it in the future.

What Else Can I Learn from My Numerology Number?

Just like a daily horoscope for your star signs, your Numerology Number can provide you with integral information about yourself—on a daily basis. If you know your Numerology number, you’re on your way to receiving daily readings.

Plus, you can get yearly readings as well, which will inform you as to what might happen in your coming year. How cool is that?

Wait, What is a Master Number?

That’s a good question, we skipped over that part. A master number is a number that corresponds with your personality in substantial ways: 11, 22, and 33 are all master numbers.

If your birthdate includes a master number 11, that means you have a lot of good intuition. It also means that you’re cooperative and you’ve got superb awareness of those around you.

If your birthdate includes a master number 22, that means you are incredibly practical, and we can count on you to make all your dreams a reality. People with master number 22s, have a tendency to be confident and very hard working.

Finally, if your birthdate includes a master number 33, that means that you are someone who enlightens other people. You have a knack for teaching, and you always listen.

Master numbers are special because they are stronger than regular numbers. They have more energetic power, so it is especially important if you have one on your birthdate.

Is Numerology Confined to Just My Birthdate?

Although I’m covering numerology in relation to birthdates, specifically, Numerology can be determined by other numbers and names as well. For example, your house address or your name can be used to determine a Numerology number.

We’ve gone over a lot, so let’s go over what we’ve learned one more time. Numerology can be defined as a set of numbers that spiritually affect our lives.

Each of us has a Numerology number, and you can determine your number from your birthdate. Some numbers are more compatible than others, so when you’re endeavoring into a new relationship, be wary of the other person’s Numerology number.

The next time that you’re about to endeavor into a new companionship, remember what you’ve learned about Numerology. You’ll thank yourself because you never want to be committed to someone that you’re not spiritually aligned with!