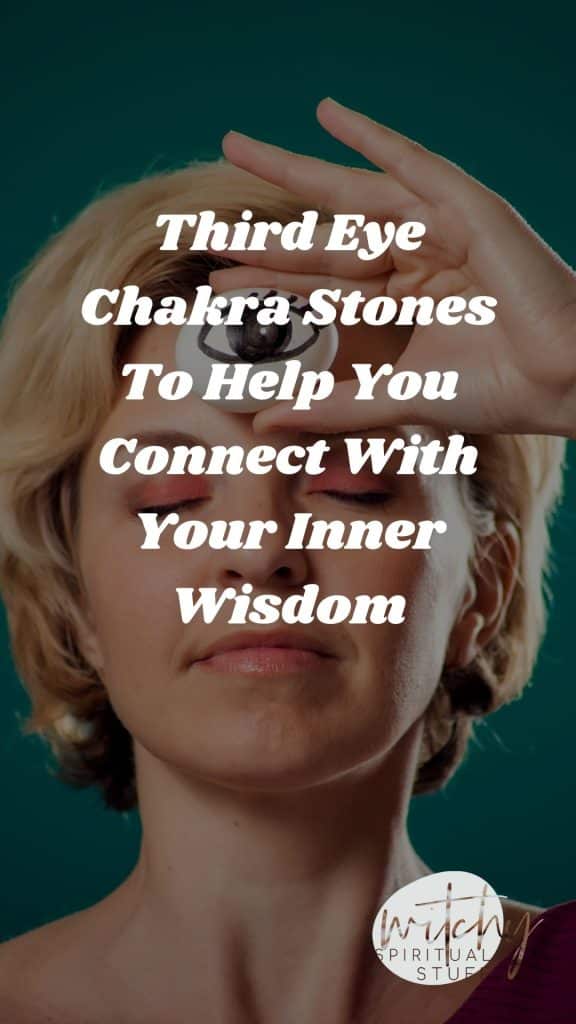 For many centuries, many cultures have celebrated the existence of a Third Eye Chakra, particularly in Indian and Hindu cultures.

Today, stories of the third eye chakra have been passed on from word-of-mouth discussions, all the way to astrology and tarot blogs and podcasts.

But what exactly is the third eye chakra, and how important is it in the realm of spirituality?

What is the Third Eye Chakra?

The third eye chakra, also called the brow chakra and known as the Ajna chakra in Sanskrit and Ayurvedic philosophy, lies in the center of our forehead, particularly in the space between our eyebrows.

Throughout history, the third eye chakra and spiritual experiences have been linked with the pineal gland, which is a pea-sized conical gland found in the brain.

The pineal gland is known to produce melatonin, which is important for sleep modulation, but it has also been regarded by mystics and seers as an organ of “supreme universal connection.”

If you’ve ever taken a little too much melatonin and fallen asleep, you probably had some wild and wacky dreams. That’s just the beginning of unlocking your intuition.

It is often the chakra used for both deep self-reflection and keeping the mind open to the world. It’s often associated with the element of light and with the dreamy colors of purple and indigo.

What Happens If Your Third Eye Is Blocked?

The third eye chakra, like all other chakras that constitute our body’s energy, can be blocked.

A blocked third eye chakra can entail spiritual confusion, a lack of general clarity, an inability to move forward with ideas, stress, indecisiveness, pessimism, and not being able to see “the big picture” in your life.

Physical manifestations of this blockage are also common, ones such as headaches, insomnia, eye and ear problems, and hormone issues.

Meanwhile, similar to all the other chakras, the third eye chakra can also end up distributing too much energy.

An overactive third eye chakra can cause an overindulgence in a daydreaming and imaginative state, which could then lead to overwhelming mental exhaustion and mental fog.

So how can you balance your third eye chakra?

What are Third-Eye Chakra Stones?

Crystals and gemstones have been used as chakra stones since the dawn of ancient civilizations.

Chakra stones are stones believed to hold vibrational energy, which could then be used to either transmit or absorb your own energies in the hopes of balancing them.

Third-eye chakra blockages are not uncommon, which is why keeping a few chakra stones handy and actively trying to heal and unblock your chakra can help keep your physical, emotional, and spiritual state of mind healthy and balanced.

Let’s look into a few of them.

The amethyst is a powerful stone associated with spirituality, peace, and wisdom.

Also known as the “Stone of Spirituality,” it is the perfect stone for a “spiritual awakening” and is highly associated with mental clarity, enhanced memory, boosted intuition, psychic abilities, and connecting with the divine.

When used during meditation, it can help calm the mind, allowing us to access deeper states of consciousness.

Apart from its spiritual benefits, the amethyst is also used as a “sleep stone,” giving aid to those who experience insomnia and other sleeping problems.

As a stone deeply intertwined with the deeper layers of consciousness, it also influences the occurrence of vivid dreams while reducing nightmares in the process.

Known as the “Stone of Truth,” the black obsidian can help motivate you to succumb to curiosity and find answers.

It brings clarity to the mind and works to unshroud it of confusion and mental fog. Not only does it represent the power of truth, but it also dispels toxic and negative energies in the pursuit of clarity.

The black obsidian is the perfect stone for healing and releasing negative attachments, giving you the ability to see life deeper than what you perceive it to be.

It is not only helpful for balancing the third eye chakra, but it is also used for the root chakra and the solar plexus chakra.

Fluorite comes in many colors, but when it comes to the third eye chakra, purple fluorite is the most effective of them all.

Purple fluorite is a mind-opener and is best for those who’ve encountered creative blocks. It provides focus and clarity while warding off distractions.

It is a great crystal to aid in learning and in other mental and creative activities.

Another crystal great for clearing multiple chakra blockages, the clear quartz brings clarity not only in terms of knowledge but in terms of the ease of energy flow between chakras.

The clear quartz is very much associated with light, the element of the third eye chakra. This crystal is perfect for those who seek a more holistic kind of clarity.

Known as the Harmonizing Stone, sodalite balances both the right and left sides of the brain, keeping us grounded in both creativity and logic so that we can view situations in a clearer manner than if we only used pure creativity or pure logic.

Sodalite is best used when you need to anchor yourself to the clarity of objectivity and with an appropriate balance between your emotions and logic.

It’s perfect for deep meditation, as it enhances the feeling of self-awareness and “oneness” within all aspects of the self.

Lapis Lazuli is the stone for open, clear, and honest conversation.

Known as the Stone of Friendship and the Stone of Enlightenment, it places both authenticity and deep intellect at the top of its power, helping you push forth your perspectives into the world while simultaneously basking in other perspectives with clear understanding.

Because of this, the Lapis Lazuli is also a stone of awareness and awakening, providing aid when it comes to searching and interacting with the many truths of the world, of the people around us, and of ourselves.

How should you use Third Eye Chakra Stones?

Now that we’ve covered the “why” and the “what” pertaining to the third eye chakra and the stones that can help you with healing and balancing it, we can finally move on to the “how”.

So how are these stones actually used?

There are a lot of ways to utilize the power within these chakra stones. Here are a handful of ways to use them in your day-to-day life.

How Can You Use Your Third Eye?

Understanding the chakras and going through the process of chakra unblocking is a great first step towards your unbothered, higher self.

With a bit more work, you will feel more attuned with mental harmony and peace, resulting in the best self you can be