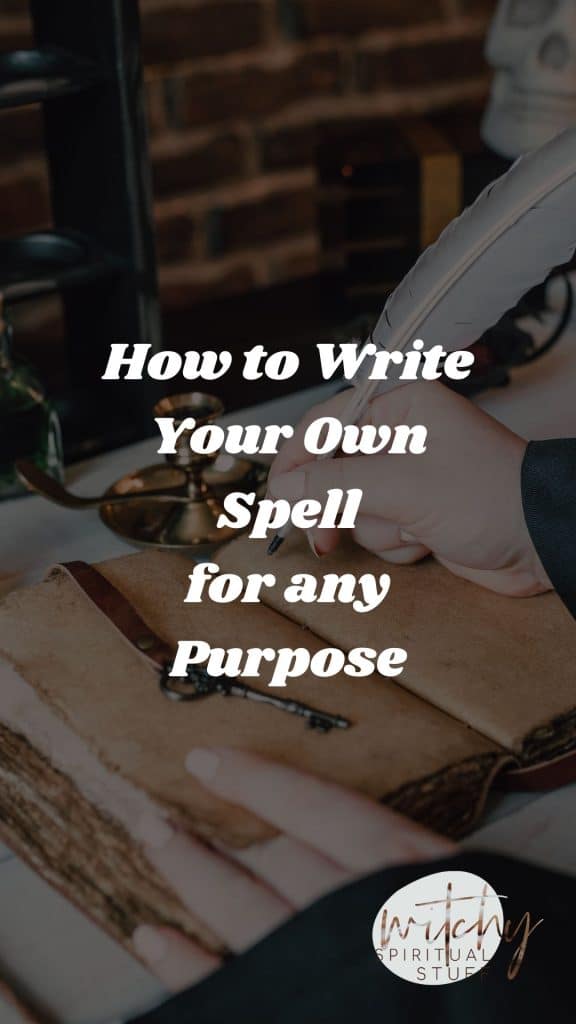 If you’re wondering how to write a spell, the number one most important thing to know is that you are the spell.

You can have all the other elements in place, but if you’re missing that one critical piece, you will fail every time.

I remember a while back there was a group of witches in the Eastern United States calling for a mass hex on Donald Trump.

They were working to organize witches around the country, and presumably around the world, to curse Donald Trump while he was in office.

Look, I get it. You hate Donald Trump.

The thing to focus on is not the person, not awful thing, or things, they did or have done.

You’re thinking about this all wrong if you’re focusing on all those horrible external issues that you figure will be so much better if you just curse this one person and get rid of them.

What you need to be focusing on what you are doing to yourself when you hate.

It is, always, a double-edged sword.

You cannot hurt someone else, no matter how justified, without also hurting yourself.

In witchcraft, we call this reality the “three-fold law.”

It states that whatever energy you put out into the universe comes back to you three-fold, or three time as powerful.

We say, “ever mind the rule of three.”

But we are not alone in this belief.

Abraham Hicks calls it the law of attraction.

Even Christianity has its version.

Jesus said, “put your sword back in place, for all who draw the sword will die by the sword.”

There are very few unbreakable, unbendable, universal laws, but this is absolutely one of them.

You must accept the consequences for your actions, for there is no avoiding them.

Sure, you can fully realize the weight and error of your ways, truly repent them, and surrender to God’s will, and you can expect a clean slate, but that is a form of accepting the consequences of your actions.

You would truly no longer be the person who took those actions, and you will have fulfilled your karma.

Let’s put it this way: the three-fold law would have been visited on you in the form of the guilt, shame, and grief you experienced as a result of your actions.

So, either way, karma gets its payment.

Now, sometimes you will be willing to take the consequences.

There’s this great scene in the George Clooney film “The Ides of March” on this topic. Clooney’s character is running for president, and he is against the death penalty.

In an interview, a journalist is asking him about it, and he notes that the state should not take on the responsibility of killing humans. That is too heavy a burden to place on the state, and on the souls of the people who will be charged with the killing.

“But what if someone broke into your house and killed your wife and children? Wouldn’t you want that person dead?” She asks.

“Oh yes if that happened, I would hunt that person down and kill him. But I would accept the consequences for my actions. I would be arrested and charged for my crimes and likely spend the rest of my life in jail. And the burden of that killing would be on me. Not on society.” Clooney responded.

All of this to say that in all of your spell work, you must acknowledge that it requires your energy, your will, your intention, and you will get back what you put out.

So, be mindful of this when you write a spell.

Write a Spell with Intention

Another critical piece when thinking of how to write spell, kind of an extension of the previous part, is your intention.

You will have to pour your intention into this spell, so how dedicated are you to manifesting what you are casting?

When you write a spell, you are drawing on universal forces to cocreate something with you.

And the law of attraction states that you attract what you are.

Another one of those unbendable, unbreakable, unwavering universal laws.

That’s what Abraham Hicks is referring to when they mention a buffer zone.

We may think we want something, but fortunately it takes more than simply thinking about something, or even focusing on it for a short time, and then getting it.

You have to pour your heart and soul into the things you want to manifest.

We give up a piece of ourselves to everything we create.

As above, so below.

And make no mistake, any spell you can is an extension of you.

So get really clear on your intentions and aim your focus accordingly.

You have that buffer zone to make sure you are serious about your focus and intentions, which is why we don’t instantly manifest everything we think about and instantly bring upon us every little fear.

“Your greatest fears will come upon you.” We learn from Job in the bible.

Right, because the thing you are constantly worrying about, fretting over, and focusing on, that fear, has surpassed the buffer zone and is headed your way.

So be mindful of where you allow your mind to linger.

How to Write a Spell

Now we have discussed your intentions, your energy, your focus, and the consequences, it is time to write a spell.

Essentially, you have the will, now you need the words.

You already know this part. You must have a great will and set amazing intentions that come from your heart. That way the spell you write truly comes from you, is a piece of you, and carries your focus forward.

I would say to meditate on it for several days, let it ruminate in your mind and heart, so you can gain clarity before you begin writing.

The words are huge.

We call it “spelling” for a reason.

Your spell should be short, simple, and clear.

It helps to rhyme, of course, because then it is memorable, which means it will ring in your mind more often, giving it more power.

Try to keep it to a few lines of poetic stanza.

And be sure not to cast a spell to change someone else. It won’t work, and even if you do influence someone else to change their will, it takes a tremendous amount of energy from you.

Bottom line: mind your own business.

Finally, keep the spell open and general enough that you leave room for the Universe to deliver “this or better.”

Remember, the Universe has a much better imagination than you do. Trust it to surprise and delight you.

So, if I wanted to write a spell for love, for example, I would write something like:

“True love is mine

It is waiting for me

I open my heart and let it be

I become what I seek

Spreading love where I go

When my true love arrives

May I feel it and know.”

In this spell, you are acknowledging your worth of love, you know it already exists, you intend to become the thing you seek, attract the thing you already are, and you merely ask for guidance in recognizing it when it arrives.

In writing a spell, you are recognizing the Universe as an all-powerful, loving coconspirator.

Now, create a ritual wherein you speak the word out loud to the Universe.

It could be a new moon or full moon or any of the moon phases. It could be at dawn or at midnight and on any day of the week.

It could be in a circle cast with candles and other elements of nature or crystals.

You can create any ritual that resonates with you.

The key is to speak the words out loud.

Step 4: Become the spell and let it go

When you have performed your ritual, you must burn the paper on which it was written and then become the thing you want.

You trust the Universe to do its part, and you do yours.

In the end, writing your own spells take practice as magic spells, or anything magical, requires you getting to know yourself.

There are a million different ways to write a spell, and very few spelling rules. Magical action requires that your release negative energy and embrace your spelling words, whether they be powerful love spells or spells for professional help.

For the best results for successful spells, you must have pure intention, magickal intention, specific spells in your heart, and a magic word you believe in.

I love intention in magic, as the results are always on point. Your most dramatic moments come in the form of effective love spells, drawing on powerful tools in potent magic, and recalling the lost ways of witchcraft and spiritual energy, positive energy.

It is a good idea to start small, with a general idea, and then grow your strong magic, your white magic, with your heart open and your material components alongside you.

The most integral part of magick is your own signature on the dotted line, on that small piece of paper you send out with the support of your deities, your spirit guides, your higher self.

Magic work reminds us all that we are the spell.